In a press conference Monday, Nick Begich tearfully remembered his “great friend and hero Don Young.” Begich, who co-chaired Young’s 2020 campaign, effusively praised Young before attempting to explain to reporters why he had decided to run against his former friend and mentor before his tragic passing.

“Some might call me a traitor or a backstabber for turning on Don, after he did so much for me and my career. Look, did I launch a relentless barrage of underhanded attack ads on Don in his final months? Yes. I did that. Did I get Suzanne Downing to throw Don under the bus with near-daily smears on his character? Yep. I did. Suzanne loves me. But here’s the thing: Don was ready to retire. He just wanted to lose to a worthy opponent. And in my heart of hearts, I believe that Don saw that worthy opponent in me. It was like a ‘pupil-defeating-the-master’ type scenario. Don wanted me to unseat him. I’m just sorry he’s not here to see me win.” 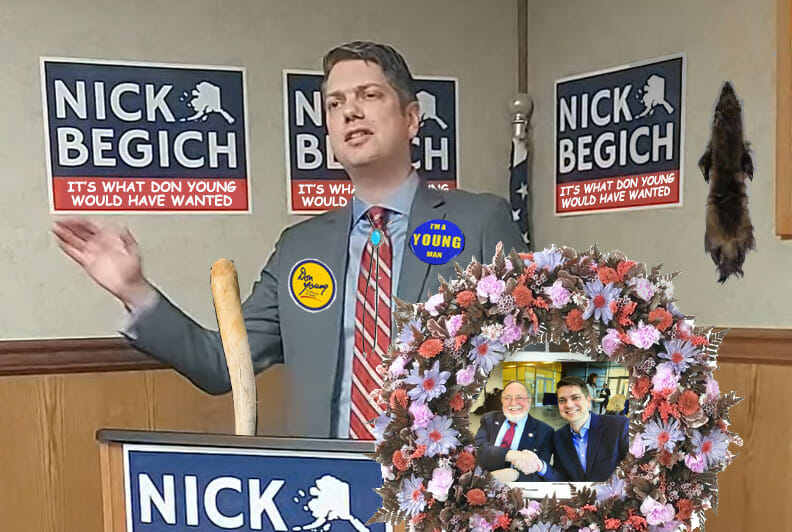 Begich reminded reporters that he had attended Young’s memorial service in Anchorage. When asked why the Young family had requested that he not attend and then instructed him to leave, Begich responded, “I think it’s because they see so much of him in me, so it was just hard for them seeing me there.”

Begich then began weeping profusely, and appeared inconsolable for several minutes. “This race is just so weird now,” Begich finally stammered with tear-stained eyes. “I have to run against Santa Claus and Sarah Palin. I just wish my dear friend and mentor Don Young were still here so that he could endorse me.”