Senator Mike Shower (R – Wasilla) has decided not to join the Alaska Senate Majority caucus. He posted this on his official Facebook page earlier today: 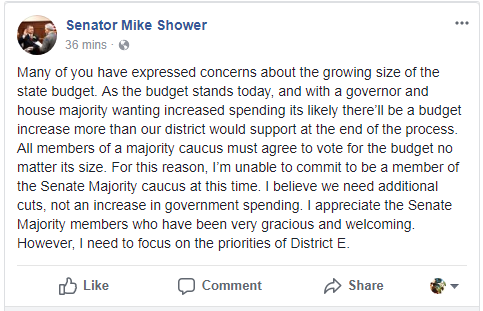 His office provided no further comment. The Alaska Senate Majority also provided no comment on Shower not joining their caucus.

Last week, Senator Bill Wielechowski (D – Anchorage) made a rare procedural move on the senate floor. He motioned for his bill, enshrining the permanent fund dividend in the constitution, to be discharged from the Senate Judiciary Committee. The committee has not held a hearing on the bill in a year. Shower voted with the majority against discharging the bill. Caucus rules require members to vote with the presiding officer on procedural votes, which that was. Many of his constituents and PFD defenders were upset with his vote. This likely factored into his decision to not join the caucus.

The appointment process to fill the senate seat that Mike Dunleavy resigned from is definitely one for the record books. After the Republicans sent three names to Governor Walker, Walker decided to go rogue. He appointed Randall Kowalke, who was not on the original list the Republicans sent him. Then the senate rejected Kowalke. Republicans insisted Walker chose from their list. Many figured he would appoint Representative George Rauscher (R – Sutton), who was on the list. But a bizarre “BDSM FREE ZONE” sticker on his office door seemed to have ended that. So Walker appointed Tom Braund, a person few people politicos knew anything about. They got to know him pretty quick. Facebook posts where he compared women to dogs and talked about hunting down abortion doctors with scissors and cutting out their hearts made the rounds. Soon after, Braund withdrew his name, citing personal issues.

The entire process has been bizarre. Walker then chose Shower, a person few people knew much about. He is a FedEx pilot and former fighter pilot. He is definitely a maverick. Why he would want to become a state senator is anyone’s guess. There is speculation that he is just a place holder. Multiple sources confirmed that Representative David Eastman (R – Wasilla) was very involved in getting Shower’s name submitted. Why has Eastman been so involved in this process? And why does the Alaska Republican Party (ARP) listen to him? He probably wants to run for the seat. And the ARP State Convention is this week in Anchorage. There is speculation that ARP Chairman Tuckerman Babcock was worried Eastman’s crew of Valley delegates would not vote for him for chair at the convention if he did not do what Eastman wanted. Hard to say what exactly is going on but that seems like the likely explanation.

With Shower not joining the Republican senate majority caucus, they are left with only 13. The minority has five Democrats, leaving Shower and Senator Shelly Hughes (R – Palmer) on their own. Hughes was booted last year for not voting for the budget. Certain votes require a 3/4 vote of either body. This includes taking money out of the constitutional budget reserve, which will likely be required this session to fund the budget deficit. The other option would be to use the permanent fund earnings reserve, which only requires a simple majority. But if that happens look out for some next level anger from the PFD defender crowd. The next six weeks of session will definitely prove to be very entertaining.