The Oversight and Review Unit is a new unit within the Department of Administration. It has been tasked with investigating and reviewing agencies in state government. It was created by Commissioner Kelly Tshibaka at the direction of Governor Mike Dunleavy (R – Alaska). In February, Dunleavy sent Tshibaka this memo: 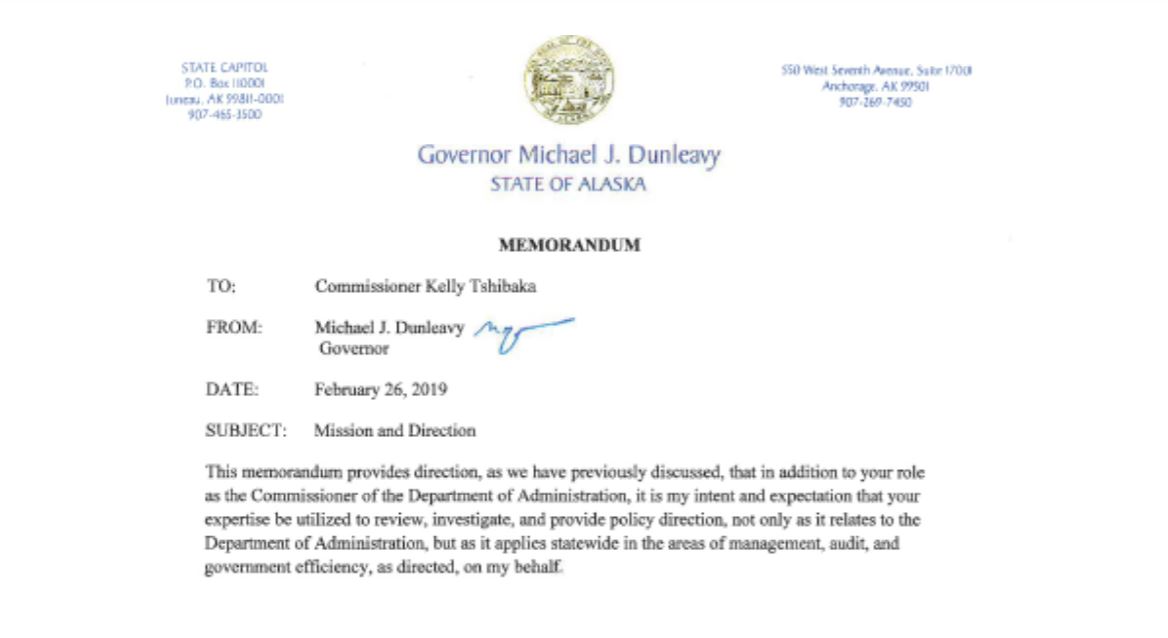 Tshibaka cites the memo as authorization for the new unit. The unit purports to be independent. However, the unit currently has no statutory authority and the two people working there are classified as exempt employees. Exempt employees are “at-will employees,” meaning they are not protected by a union and can be let go anytime for any reason. Recall that after Dunleavy was elected, he required all exempt employees to submit a letter of resignation as well as a letter stating that they wanted to work for him. Those who chose not to were immediately fired. Some are currently suing him, and his former Chief of Staff Tuckerman Babcock, for wrongful termination.

This SOA web page describes the new Unit and its mission. It states:

Reviews provide independent, objective assessments to improve the agency’s programs or activities. In carrying out these responsibilities, the O&R reviews and evaluates internal controls to ensure fiscal accountability of the agency. In carrying out investigative duties, O&R conducts, supervises, and coordinates investigations designed to detect, deter, prevent, and eradicate fraud, waste, mismanagement, misconduct, and other abuses in government.

The Oversight and Review Unit produced its first report on November 4, 2019. It was titled, “Review of the Efficiency and Effectiveness of the Public Defender Agency.” The 63 page report included findings and a series of recommendations for the Public Defender Agency. I’m not going to get into the report, it was widely covered by Alaska media when it was released. However, none of the media reports, with the exception of an AP story, questioned the authority of the new unit.

This AP story states, “Tshibaka said the report was not written by political appointees and was written under standards used by inspector general offices.” Lehe is clearly a political appointee, and Lehe and Millar are both exempt employees who report to a boss who is exempt. Any of them could be let go anytime for any reason by Tshibaka or Dunleavy.

This KTUU article states, “The report marked the first completed review conducted by the administration’s Oversight and Review Unit. Department of Administration Commissioner Kelly Tshibaka described the findings as ‘relatively mild’ compared to the ones she expects to be produced in the future.” It seems clear that Tshibaka has ideas about what the Oversight and Review Unit will be doing.

I sent Commissioner Tshibaka an email asking about the report and the unit. She sent me the following response:

The Governor gave DOA the authority to do reviews/audits/investigations of the SOA government. To implement that, we set up the O&R unit. It’s in the Risk Management Division. The positions are exempt because they are identified as such by statute: AS 39.25.110(9).

Regarding independence, the unit is independent from the agencies, programs and operations being reviewed/audited/investigated. The O&R staff can’t audit or investigate people with whom they have a personal or financial relationship. They can’t review offices in which they have a financial interest, have responsibility for decision making, or have involvement in document preparation.

The O&R staff must be free from external impairment and pressure to reach certain conclusions, use certain methodologies, look at/refrain from looking at certain documents, etc. The Governor’s authorizing memo gives me the responsibility for providing O&R that “top cover” so they can form independent and objective conclusions and have full access to all information necessary to reach those conclusions.

Until the State sets up a function like an IG that has dual reporting authority to both the Governor and Legislature (see the federal IG Act), maximizing its independence, an “internal affairs” model like O&R is the next best practice for independent oversight that a government can implement.

The Governor is committed to restoring trust in State government, and improving efficiency and effectiveness through oversight, accountability, and results. O&R is just the start of how his administration is going to do that.

I sent Tshibaka a follow-up email with additional questions that include:

I also asked her why the State did not use truly independent sources like Legislative Budget and Audit, which is established in statue, the Institute of Social and Economic Research (ISER), or another entity that is not made up of employees who report to her and Governor Dunleavy. In the past the State has used non-State entities like ISER or private attorneys to produce reports on State agencies or employees. For example, when attorney Nancy Driscoll Stroup had a vendetta against Libby Bakalar, insisting she was working on her blog during work hours, the State hired attorney Bill Evans to do an independent review. He found that she was not using State resources or spending time at work on her blog. Think about what Lehe and Millar would find if they were tasked with a similar investigation.

I don’t think there is a problem with having an independent review and oversight agency within state government. I do, however, think there is a problem when one is created without statutory authority, that is staffed by exempt political appointees, that purports to be independent. Can Commissioner Tshibaka direct the unit to investigate anyone or any agency she decides? Does she have any say over what the reports say or how they are written? What is to stop this unit from investigating State agencies or employees that the administration decides they have a problem with? All you need to do is look at the media coverage of the Public Defender report. It was accepted and reported with little to no question about the source of the report.

This is a developing story. Look for a follow-up story if/when I hear back from Commissioner Tshibaka on the questions I sent her.

“The Governor is committed to restoring trust in State government,….”. The Governor didn’t seem much committed to anything nor concerned with establishing (let lone restoring) trust during the campaign when he made all those false statements and promises. And meanwhile “crickets” from the body who is supposed to maintain trust in government by oversight – our esteemed legislature.

Neither Dept. of Admin. nor any other executive branch department/agency would use LEGISLATIVE Budget & Audit (LB&A) because LB&A resides in a different branch of government, the legislative branch.

1 way input and discipline… This administration is sounding more like the Mob every day.

It is a bit too late for Dunleavy to restore faith in our government or him as Governor, after all the damning things Dunleavy has already done and continues to do! Take for example —another Dunleavy long-time staff member, Robert Corbisier was recently appointed as Executive Director or Division Director for the Alaska State Commission for Human a Rights! This is guy who speciality is Environment and Natural Resources, not employment law or Civil Rights! This from the Governor and state agency that is suppose to eliminate and prevent discrimination for all Alaskan’s!!! Lifelong Alaskan’s have been kicked to the… Read more »