According to e-mails and documents obtained by the Alaska Landmine, Mayor Dave Bronson’s administration ordered the Municipality of Anchorage Traffic Department to install over 200 anti-panhandling signs that cite an unconstitutional statute at city intersections. In a meeting earlier today, Municipal Manager Amy Demboski stated that the city had installed 68 signs and spent $8,689 on the project to date. 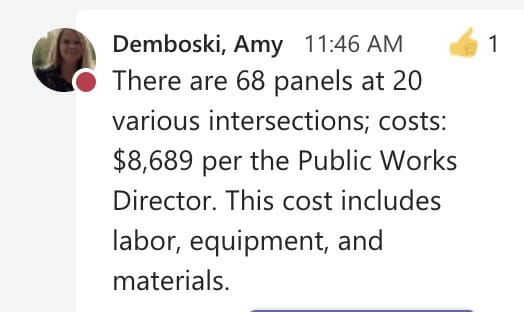 In a December 31, 2021 e-mail sent to several Assembly members and to Assembly Council, municipal Ombudsman Darrel Hess states that Brice Wilbanks, Mayor Bronson’s deputy chief of staff, contacted the MOA Traffic Department in July 2021 to request assistance with the administration’s anti-panhandling signage project. After Hess began receiving messages from constituents in December 2021, the e-mail says, he looked at the statute cited on the signs and found that it had been ruled unconstitutional by the Alaska Superior Court in 2014’s Ballas, et al. v. Municipality of Anchorage. In the e-mail, Hess states that he contacted Public Works Director Lance Wilbur, who acknowledged that he had provided the statute for the signs but had not requested a legal review of the signage and was unaware that the statute had been ruled unconstitutional. 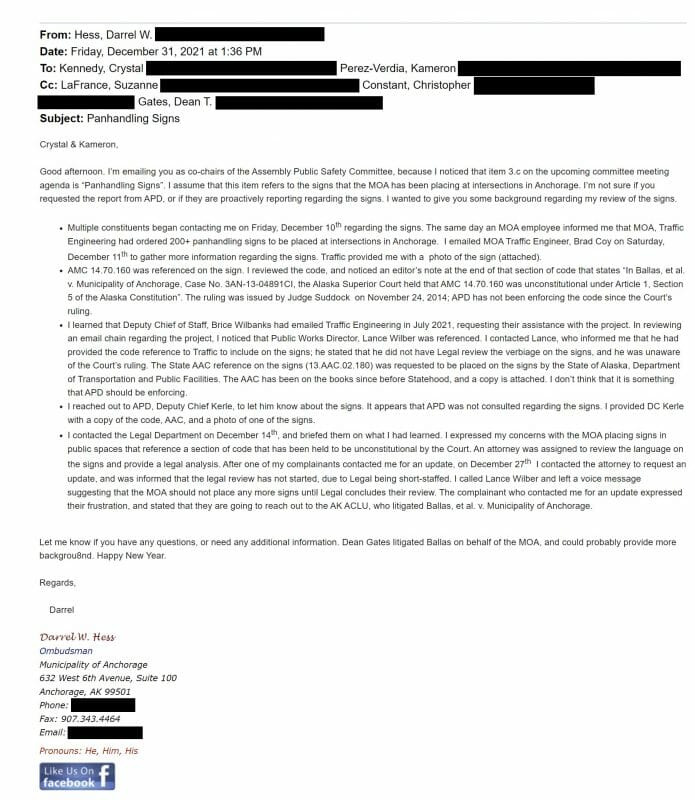 Hess states in the e-mail that he contacted APD Deputy Chief Michael Kerle to inquire about the anti-panhandling signs, and was told that APD had not been consulted about the project. In today’s municipal meeting, APD Chief Kenneth McCoy stated that APD had stopped enforcing Anchorage’s panhandling prohibition after the 2014 ruling and would not do so now. 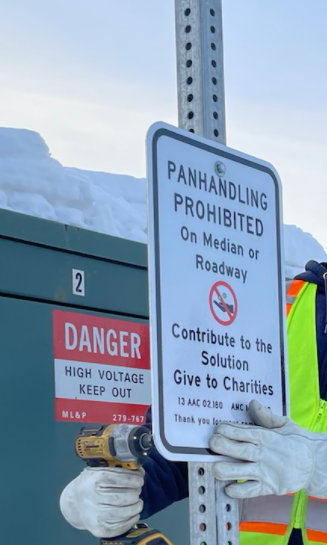 The signs also cite Alaska 13 AAC 02.180, a state law prohibiting distraction of drivers or pedestrian solicitations on roadways for business, employment, or contributions.

Mayor Dave Bronson made combating homelessness a key element of his 2021 mayoral campaign. On his since-removed campaign website, Bronson vowed that “those who choose to live a homeless lifestyle will not be allowed to ruin our businesses and neighborhoods. They will be removed from our parks, public streets, and our business and residential areas.” A page about panhandling in the Mayor’s section of the Municipality of Anchorage website states that “it is illegal in Anchorage to lure panhandlers into the roadway because it is dangerous,” and encourages Anchorage drivers to donate to charities instead.

Multiple administrations have struggled to address panhandling on Anchorage streets. A system of fines and other penalties for panhandlers and those who gave to them was put in place by the Sullivan administrataion in 2011, but had mixed results.

The Landmine reached out to the Mayor’s office to request a comment about the current signage project, but did not receive a response in time for publication.

So, this is how we solve the panhandling problem, by posting a sign, which is arguably distracting to motorists, informing the panhandlers of an unenforceable law? Somebody will get a “deal” when these will be used as shingles on a woodshed. You can’t make this stuff up.

Ok Lynn
Do tell. I’m sure you have the answer.
Always one to comment without a solution.

Uniformly enforce the statutes that protect the public and the individual from harm. The problem is that Trump/Dunleavy/Bronson crowd want selective enforcement (usually against people who don’t look like them) and they lose in the courts every time. So. you believe that posting meaningless signs with reference to a law that cannot be enforced is the solution? That is a classic example of attempting to equate motion with progress and sadly stunts like this work on the gullible.

I don’t think that a single one of you on the ANC Assembly have a clue. All that you leftists want is your hidden agenda that doesn’t work either on your socialist platform. You folks need to get out of town & return the city to the common sense citizens instead of running this town to the crapper. The leftist Socialists agenda agenda doesn’t work & isn’t wanted in Anchorage.

The “leftist socialist agenda agenda” of not trying to enforce unconstitutional laws? Gasp!!!

I understand that anything that doesn’t directly benefit you is “socialism”. The point is that Bronson’s “Common sense” in this case is just another waste of time and money. “Common sense” indeed…

The answer is to follow the laws every elected officials swears to uphold. Don’t ignore it. Don’t actively disregard it. Don’t play with our water supply. Don’t hire your unqualified friends. Don’t make it more difficult to get vaccines or tests. Don’t be an asshole.

Here’s the answer, Richie: don’t post signs which refer to unenforceable, unconstitutional laws. I realize you would die for Bronson, but this isn’t even a partisan thing.

You mean like signs letting people to no let their dog shit on the trails without picking it up.

The community needs to set the tone; Anchorage has become possibly the only Northern sh–hole city, propagated by Establishment Nonprofit types that profit from “The New Human Trafficking” aka “homelessness”. Hobos network just as much as a LinkedIn white collar pros; guess how many across the country tell each other about 3 buffets a day, a hotel room, free winter clothes, medical, and they get signed up for what’s left of the PFD after the “Nonprofits” steal their part? Talking about homeless, panhandling, and Nonprofits…..it’s a shame that Elmer Rasmussen’ final legacy is that he and his daughter Natasha Von… Read more »

So many in Alaska who derive an income from government spending either directly by working for “the man”, drawing a pension from “the man” or by planning and building government funded projects for “the man” are the first to bite the hand that feed them. And the PFD is not simply a government “hand out”? How many tax subsidies does it take to keep “private enterprise” in business in Alaska? The days of the “old west” are gone now and that fiction you see in the movies about “when America was great'” was so often a myth. You might want… Read more »

Site wouldn’t let me vote. Said “You’ve already voted for this comment” although I had not voted on any of the comments. This has happened before…..

It appears to me that the signs promote a political position, addressing homelessness by giving to charity (another kind of enabling) instead of by altering the system that leads to and promotes homelessness–lack of access to mental health treatment, high cost of housing in relation to wages, shortage of single bedroom and studio apartments.
The debate over if charities or the municipality and state should provide the solution is contentious, and so these signs are promoting a political position.

The signs are still there.

Not Judge Smails. I say keep them.