The Alaska Landmine has obtained contracts between the Alaska Gasline Development Authority (AGDC) and Holland and Hart, and Brownstein Hyatt Farber Schreck, law firms who employ former Alaska Governor Sean Parnell and former Alaska Senator Mark Begich, respectively. The original contracts were signed in May and September of 2020. Change orders were signed in December. You can see the contracts and change orders here:

Recently Governor Mike Dunleavy (R – Alaska) wrote an op-ed in the ADN about a potential gasline from the North Slope to Fairbanks. In the op-ed he says:

Backed by significant private sector interest, and the real possibility of funding from the federal government, this opportunity to create thousands of construction jobs couldn’t come at a more opportune time for our state.

Both contracts have language about work on the federal level to support the gasline. The Brownstein Hyatt Farber Schreck contract specifically cites the CARES Act and the potential of federal money for infrastructure projects. Parnell and Begich both have contacts in D.C., on both sides of the aisle. While the Trump administration was supportive of resource development projects, since being sworn in President Joe Biden has taken steps to curtail fossil fuel development.

Larry Persily, who served as head of the federal office for Alaska Natural Gas Transportation Projects from 2010-2015, provided the following quote on the contracts:

Certainly ADGC is not the only entity in the country that sees federal Covid funding as a financial opportunity. They are smart for trying to get on the list. However, while AGDC is more likely to get federal funding for the gasline than Representative David Eastman is to be elected House Speaker, they are both not going to happen.

AGDC provided the following comment on the contracts, “AGDC will provide an Alaska LNG progress update during tomorrow’s board meeting.” AGDC is set to hold a board meeting tomorrow morning at 9 am. Here is the information: 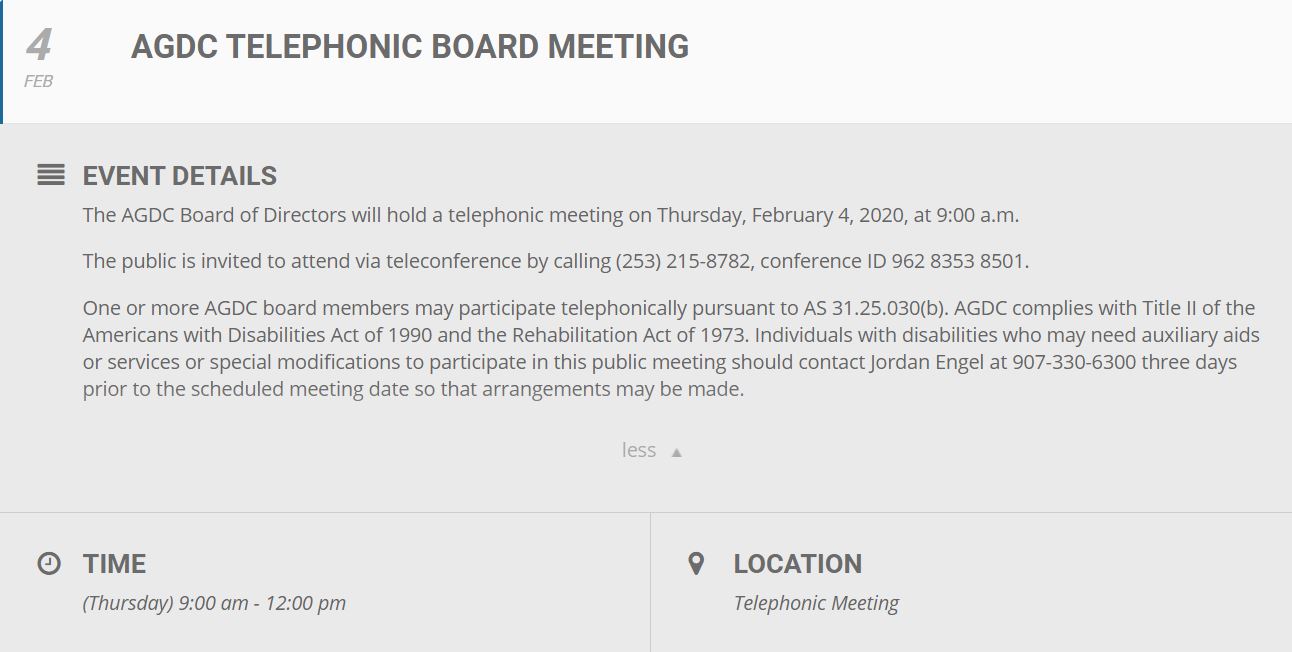 Very difficult to tell the difference between individual blood sucking parasitic lamprey eels. This “vendor selection” makes perfect sense in light of the reality that both of these “public servants” objected to rank choice voting.

They are keeping control of “the project” in the looooong oily arms of the slope cartel, who have first dibs under their current contract with the state “from way back when”. I mean if we are going to pad the pockets of slope oil companiesfavorite lobbyists Parnell and Begich, who both work for K street lobby giants who also represent the three companies on the slope. No conflict there...? The three slope oil companies are playing "both ends against the middle" with state interests again. Begich and Parnell were hired to sell the slope "company" deal that is now under… Read more »

Has it come to light what Mark Begich is charging the city for housing the homeless at his 2 star motel?

A gas line to Fairbanks makes sense. It will help reduce the anount of air pollution that frequently covers the area.
That said there is no way the current Federal Administration will allow the pipeline to be built. The best Alaska can hope for now is to get the nessasary studies done for thenline to Fairbanks

Should a Gasline to Fairbanks ever be built former Governor Walker may see his dream of the line being extended to Valdez. The chances of this ever happening are approximately 1 in 100,000.

I understand the cynicism on this and the many decades this project has been ‘just around the corner’. I hear Frank Williams admit this is no sure thing. Is it worth the lobbying investment? Even at $15/mmcf, will it help Fairbanks deal with air pollution and offer a rational chance to convert the Ft. Wainwright and Aurora Energy coal plants to natural gas? Just on air quality alone, GVEA has donated over $600,000 of non-member funds to wood stove change-outs and testing ESPs. EPA has contributed millions. Point sources, FNSB, DEC, EPA have spent countless hours dealing with it. Nearly… Read more »