There has been a lot of talk around the Capitol lately about the sheer number of emails and voicemails many legislators have been receiving about Governor Michael J. Dunleavy’s (R – Alaska) agenda. I heard about some particularly nasty ones that Speaker Bryce Edgmon (I – Dillingham) and Representative Zack Fields (D – Anchorage) had received. I inquired about them and was told they were real. Upon request, I was given copies of the messages. Here are three of the worst ones.

To Speaker Edgmon. The caller is referring to a recent House Majority press conference that he saw on the “lame ass Channel 2 news.” He is very concerned about the road system and legislators who don’t live on it. Someone should tell him the vast majority of our State wealth comes from the North Slope, which is not on the road system. He ends the call by saying, “Fucking n***ers.”

To Speaker Edgmon. The caller says Edgmon is from “The pissant, shithole part of the State.” He sounds like he’s had a few drinks. He’s also very concerned about anyone that does not live on the road system. He calls Edgmon a pussy for switching from Democrat to Independent. He ends with calling him a “fucking loser.”

To Representative Fields. The caller is very critical of Fields. He also sounds like he has had a few drinks. He ends with, “Go fuck yourself, n***er.”

Dunleavy has been running Facebook ads from several pages that are being paid for by his office. The pages include Restore the PFD, Repeal SB91, Cap Government Spending. One ad targets Senate President Cathy Giessel (R – Anchorage). It ran from May 6 – May 7 with a budget of $100-$499. There are several other paid ads. 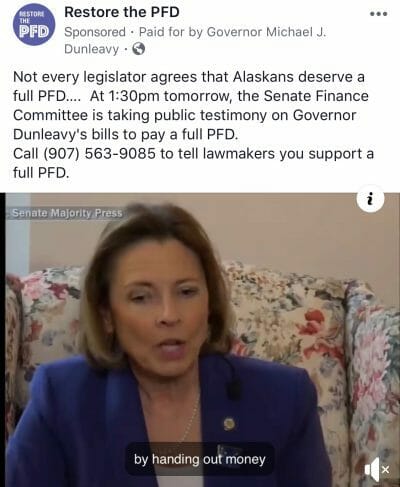 There are also text messages going out to encourage people to call in and testify on different bills, including Dunleavy’s PFD bill. Representative Fields recently asked members of the Dunleavy administration about hundreds of emails and voicemails his office has been receiving from people who have been directed to them by Americans for Prosperity. The officials he asked said they did not know anything about it. If you sign up on their website, it takes you to links to call Fields. You click on it and it calls his office from the computer. The caller ID in his office shows a Columbus, Ohio number. Here are some screenshots of the voicemails. These are just a few. There are many, many more. 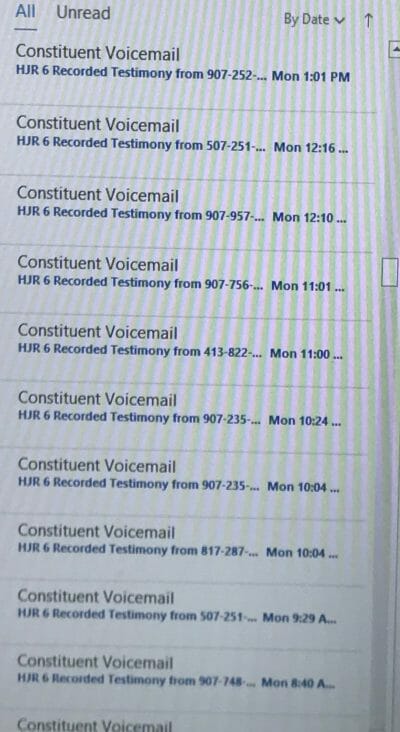 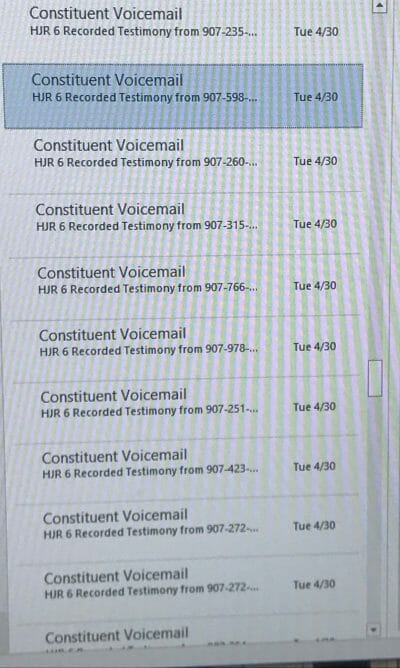 Dunleavy has also been using language like, “I’m not going to stand for it. Are you?” People who have been around the Capitol a long time have told me they have never dealt with this kind of thing before. Dunleavy is using State money, which should be a concern, and social media to target Alaskans, fire them up, and encourage them to contact legislators. It’s no surprise that some people call in and leave these kind of horrible messages.

None of the vulgarity, anti semitic or racist remarks surprise me. It’s been on the rise since Mr Trump was elected. Our esteemed Governor is his maxi-me, therefore the same illogical people are dragging themselves behind their leaders. It’s just sad that neither one comes out with meaningful dialogue to oppose such distasteful comments and hateful behavior.

I guess these are the same people draining the ‘muskeg’.