The House is likely to concur with the huge budget passed by the Senate on Tuesday, according to multiple sources. The House was scheduled to reconvene at 7 pm last night to consider concurrence, but when it became clear the concurrence votes were likely there, House Speaker Louise Stutes (R – Kodiak) quickly and quietly adjourned until this 10 am this morning. That did not happen, and the floor session has been delayed to a call of the chair.

Normally, when the budget gets sent back from one body to the other, they fail to concur with the changes so the differences can be worked out in a conference committee. In fact, I could not find an instance going back decades where the House concurred with the Senate’s version of the operating budget. But we are not in normal times.

Update: Thanks to information provided by the Legislative Finance Division, the House concurred with the Senate’s budget in 1982. That was also a combined operating and capital budget bill. It was also the year after the famous House coup in 1981, which means it was the same Legislature. 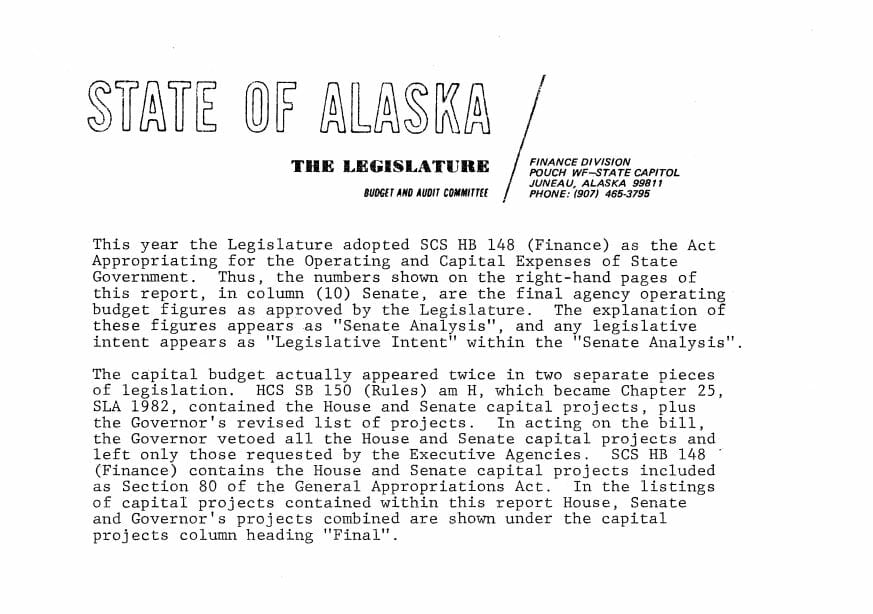 The Senate Finance Committee jammed the capital and supplemental budgets into House’s operating budget. Then, it got loaded up with billions of dollars in larger dividends and capital projects on the Senate floor. Because Senator Natasha von Imhof (R – Anchorage) was absent on Monday, the Senate narrowly approved amendments raising the approximate $2,600 (50/50 amount) to approximately $4,300 (statutory amount). They also added a one-time energy rebate of $1,300, making the total approximately $5,600 per Alaskan.

The colossal Senate budget includes approximately $4.9 billion for agency operations and statewide obligations, $3.5 billion in dividends, over $800 million for capital projects, and approximately $1 billion in supplemental spending for last year’s budget – totaling over $10 billion. This is just state funds. When you include federal matching funds it totals over $17 billion, a staggering amount of spending. Soaring oil prices have led to a large rise in revenue. But the Senate’s budget is so big there is still around a $1 billion deficit with the windfall, leaving no money for savings.

Sources report Dunleavy has committed to vetoing the $1,300 energy rebate, totaling $840 million, in exchange for support from House members who are concerned with the massive budget. This still gives Dunleavy a full dividend but reduces the deficit. Cutting the $1,300 rebate likely got Representatives Bart LeBon (R – Fairbanks), Steve Thompson (R – Fairbanks) and James Kaufman (R – Anchorage) – all members of the minority – to agree to concurrence. Representatives Kelly Merrick (R – Eagle River) and Neal Foster (D – Nome), the finance co-chairs, will also likely vote yes. Foster supports a full dividend and Merrick got the Port of Alaska funding she wanted. This will help both of them in their upcoming elections. Representative Sara Rasmussen (R – Anchorage) is also a likely yes vote. Rasmussen, LeBon, Thompson, and Representative Geran Tarr (D – Anchorage) were all spotted at the Governor’s Mansion yesterday.

Stutes is delaying the floor session to try and somehow get people to change their minds, but the votes and the will are there. The House must go back into session by Sunday per the constitution, so she can only delay until then. As soon as the House goes back into session, anyone can motion to pull the budget from the limbo file for a concurrence vote. That only requires a majority of members present.

There are several other bills in play that many want to see passed before session is over. These include the alcohol rewrite bill, the broadband bill, the election reform bill, the campaign donation limits bill, and some crime bills. If the House concurs – and there is no conference committee – the Legislature would need to waive uniform rules (requires two thirds) to suspend the notice requirement. When a budget conference committee is appointed, something called the 24-hour rule goes into effect – meaning you can notice bills with a 24-hour notice.

The constitutional session limit is Wednesday at midnight. They could extend ten days with a two thirds vote in each body, but that is not likely. Alternatively, Dunleavy could call a special session and place as many bills as he wants on the call. The 24-hour rule is automatically in effect during special sessions. But the more likely result of concurrence is the Legislature adjourns and most the bills die.

Earlier during the Senate floor session, Stedman motioned to waive the hearing notification requirement for Senate Bill 107, Senator Bill Wielechowski’s (D – Anchorage) bill that is basically the failed oil tax ballot measure. After a motion from Wielechowski during the budget debate on Tuesday, the Senate voted to discharge this bill from Senator Josh Revak’s (R – Anchorage) Senate Resources Committee. The Senate voting to discharge a minority bill from a majority member’s committee is unheard of. The bill hearing is scheduled for tomorrow morning in the Senate Finance Committee. This is a message to pro-oil Republican legislators who supported the massive budget – if you want to break the bank then we need to get more revenue to pay for it. The idea is to get the oil industry to pressure on them. During a break, Senator Shelley Hughes (R – Palmer) asked what the bill does. Senator Lyman Hoffman (D – Bethel) responded, “It pays for the dividend.”

Things are in flux today. It’s not clear when, and if, the House goes to the floor. If Stutes can somehow convince a majority of representatives to delay the concurrence vote, they could get focus on getting other bills passed. But this is not likely. And even if they are able to pass more bills after concurrence, there’s a problem. Any bill that is passed with a fiscal note would be unfunded until next year or a special session.

Stay tuned for more updates as the day progresses. We are in uncharted territory so it’s anyone’s guess how this all ends.

Statuary PFD and back pay for money stolen.$1300 is a start.

Jeff you do see this is all theater. The rebate + a $2600 dividend is $3900, while the stat dividend is $4300. So the governor saying he will veto the rebate just makes him look like a giver of great dividend, but getting the citizens of Alaska $1300 less a year than the Senate thinks they deserve. Question: Does the IRS view a energy rebate differently than a dividend? Government services?

Just speaking for myself.
Glad to contribute to Uncle Sam including my wife and child.

For sure, paying taxes is important, so is state government (and federal) fiscal fiscal responsibility.

Leaving no money for savings? Again, you fail to mention the $9 billion the legislature moved into the corpus of the Permanent Fund over the past two years.

Savings are important, but not at the expense of the people. Inflation is killing the poor and lower middle classes in order to line the pockets of the rich.

“Sources report Dunleavy has committed to vetoing the $1,300 energy rebate…”

No, no, no Dunleavy. I want my free money! What is the difference to my wallet after Walker vetoed the legislative appropriation for the PFD and Dunleavy, using the same authority, vetoed my free energy money? I want my free money and I want it now! I don’t want to have do anything other than consume oxygen in Alaska to earn it! To hell with Alaska after the oil money is gone

My point is not about the positive effects on society of a universal income-there is lot of information one can easily find on the subject. My point is, its disingenuous for Dunleavy to claim he is bringing us a bigger dividend than the House proposed if he is cutting the total check down to the same amount as the Houses Rebate-dividend combo.

Lynn,
You are a whiny, sniveling shit that can not see past your self-righteous nose. Return the money but I bet you won’t.

What part of statutory does a lawmaker not understand?