Suzanne Downing is no longer the editor of the Juneau Empire. And that’s a good thing because it looks as though she has lost touch with what constitutes news and what is propaganda.

On Friday, July 26 Downing chose to write about @evil_bad_man  – that’s yours truly on Twitter – and his crude joke about Alaska Governor Michael J. Dunleavy and his Chief of Staff Tuckerman Babcock, who is the former chairman of the Alaska GOP. Never mind all the insanity happening in Juneau right now. Never mind all the insightful analysis on the legislative session that could’ve been written.

My guess is it’s Tuckerman Babcock bending Dunleavy over a barrel. https://t.co/oZhzSItRoy

After following her blog the last couple of years I’ve concluded that her head must be so far up the Alaska GOP elephant’s ass that she is blind to what is happening in Alaska. This would explain why she has embarked on this sycophantic crusade on Must Read Alaska. She would not speak ill of the Alaska GOP elephant even if it were trampling the 49th State to pieces.

Suzanne, it was an honest guess to the end of this episode of Molly in Denali (it took me less than 30 seconds to write that tweet, and I’m not sure if “great pains” is an accurate description of the effort I’ve put in to expressing my disdain for Dunleavy). Given the state of things in Alaska, “Tuckerman Babcock bending Dunleavy over a barrel” seemed like the most logical conclusion to the episode. There is a theory gaining traction in Alaska that Governor Dunleavy is a wooden-headed dolt who is not smart enough, nor competent enough to be the State’s top executive, and that Babcock is his puppet master. This joke alludes to that theory.

Another funny thing that happened is Downing called this tweet homophobic. Downing seems to have no idea what that term means. Does she get to call people homophobic after writing articles like this?

Is LGBTQ month in schools a form of month-long sex ed? 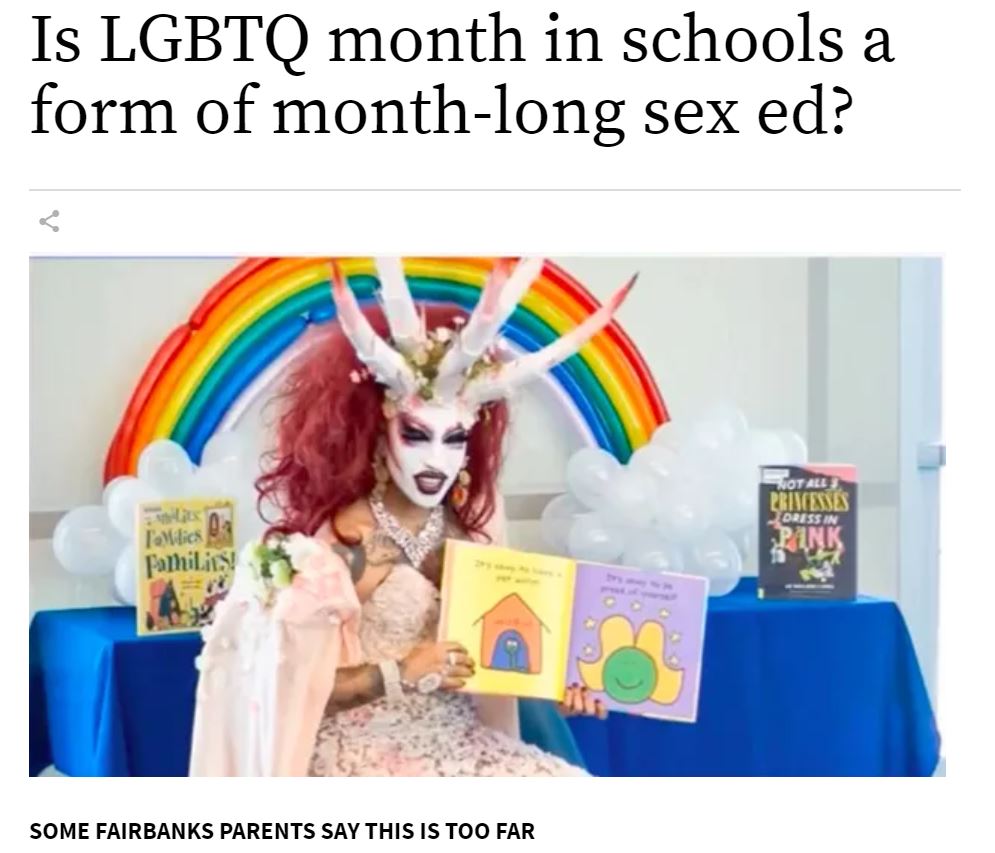 Downing’s sense of self-awareness is astounding.

Apparently, Downing is blind to the fact that people on the right also say mean things on social media. Remember Art Chance? The man who had been hired by the Dunleavy administration as a policy advisor. He was let go after it came to light that he had a long history of being crude and profane on Facebook, arguing politics, and threatening to fuck the wives or girlfriends of those who disagreed with him.

Chance still writes a column for Must Read Alaska.

I’m not bringing up Chance’s behavior to excuse my own. I am doing it to point out that people of all political ideologies can be crude on social media.

Maybe one day Downing will pull her head out of that elephant’s ass and learn to think for herself, but I doubt it. I’m sure she will continue kissing the Dunleavy administration’s ass with each blog post.

Downing acts as if she is morally superior because her language is pure. However, Downing’s Must Read Alaska is far more profane than any tweet that some libtard guttersnipe such as myself could make. Downing continues pushing Dunleavy’s dangerous agenda which seeks to cripple the University of Alaska, dismantle Power Cost Equalization, sink the Marine Highway System, and destroy thousands of jobs around the State. Many Alaskans lives could be ruined by these policies. So who is the truly profane one? It’s as if Downing is blogging straight from the gutter.

All hail Suzanne Downing, Queen of the Guttersnipes!

So Suzanne, if you’re still reading this – and God I hope you are – go fuck yourself.

Kevin Baird has reported for newspapers in Alaska, Arizona and New Mexico. He lives in Portland, Oregon. Follow him on Twitter: @evil_bad_man.

I started to read this and I just can’t. Is this what journalism is nowadays? Long, childish tweets? Every one of these “tweetalists” need to grow up — or at least take a breath and maybe do some meditation before pecking the keys.

Wow nice article… Not… was starting to like this news source until now. Keep it to real news, not the bullshit you just spewed out.

Mr. Landfield,
This diatribe is beneath you. How exactly was this supposed to further the discourse?

Yeah, but now tell me what you REALLY feel about that lickspittle woman?

This was cathartic to read. It feels even better knowing it'll get 10x the reads than anything she's ever written has.

Suzanne is ABSOLUTELY reading this, because she's fueled entirely on anger and failure

Ya’ll do realize this was a guest post, right? A.K.A. an opinion article. If you were looking for cold hard facts you clicked on the wrong link. Of course, this doesn’t mean that the comments are incorrect. Downing is 100% a guttersnipe.

Kevin lives in Portland, such a beautiful clean city! Kevin you should go back under the Burnside bridge where you belong and leave us Alaskans to our own problems.

But you really do need to try to draw a line between your journalism and opinion pieces as the downfall of many a blogging journalist is mixing the two.

That being said, Suzanne is simply a propagandist for those already intellectually imploded…

This is worse than a Must Read Alaska article.

Congrats, Kevin—you have given Suzanne yet another “article” to link to and put on a faux “poor poor me!” act to fundraise with from a throng of wealthy goblins. As a media professional I would think you’d understand the risk one takes when they spotlight something ugly—you’re raising money for her, so you officially are just as harmful as she is. By the way, your tweet was homophobic and rapey in the eyes of a sensitive human, so please don’t pretend it wasn’t. How about you instead target her spouse (or ex, who knows) Patrick Yack, former head of Alaska… Read more »