After days of denials to Alaska press that the incident had occurred at all, the Bronson administration suddenly acknowledged that Mayor Dave Bronson had ordered a halt to Anchorage water fluoridation during an October 1 tour of an Anchorage Water and Wastewater Utility (AWWU) facility. The abrupt about-face attracted national attention and led to articles in the Daily Beast, the Associated Press, and Yahoo News. The New York Times picked up the story yesterday.

The Bronson administration claims that fluoride was removed from municipal water at the request of AWWU staff in order to protect worker safety, and that they were unaware their order violated law. However, emails obtained today by the Landmine from AWWU staff suggest that the administration is continuing to make false statements to the public and the Anchorage Assembly about the incident.

“At no time was city code violated”

A December 14 statement by Bronson Administration spokesperson Corey Allen Young claims the mayor had ordered fluoridation halted because fluoride “burned the eyes and throats of staff who handled it.” According to the statement, during the AWWU tour “Information was presented to the Mayor’s team that pausing the fluoridation of Anchorage’s water would not violate federal or sate law and didn’t violate Municipal Charter.”

In a municipal meeting yesterday regarding utilities, Municipal Manager Amy Demboski stated that Bronson had ordered fluoride removed from Anchorage water on October 1 because “multiple employees that were verbally talking about eye irritation, coughing, from handling the [fluoride].” According to Demboski, “at no time was city code violated.”

In the meeting, Deputy Municipal Manager Kolby Hickel stated that AWWU Manager Mark A. Corsentino and others had implored the administration to end municipal water fluoridation. According to Hickel, Corsentino and others “made it very clear to me that this chemical, even with proper PPP on, it burned their eyes, it burned their throats, it irritated their skin. It is something they don’t like to deal with.” Hickel stated that Corsentino had repeatedly advised her that ending fluoridation would save money and would be a “health improvement” for workers at AWWU.

Hickel stated that it was AWWU staff, and not the mayor, who turned off the fluoride. According to Hickel, “It was stated multiple times during this time that it would not break any state or federal regulations or charter. What they failed to mention was that it was actually in code. When we learned it was in code, Mr. Mayor and Ms. Demboski immediately ordered it to be turned back on.”

This morning, the Landmine obtained an October 1 email sent from an AWWU staff member present on Bronson’s tour to Corsentino and others at AWWU. The email, sent shortly after the tour, states “It was explained to Mayor Bronson that Municipal Charter directs the AWWU water plants to dose fluoride, and it was not a compliance issue with AEDC.” The email claims that Bronson asked about the expense of adding fluoride to municipal water, and after receiving an answer ordered the municipality’s fluoridation systems turned off. The email contains no references to worker health or safety. 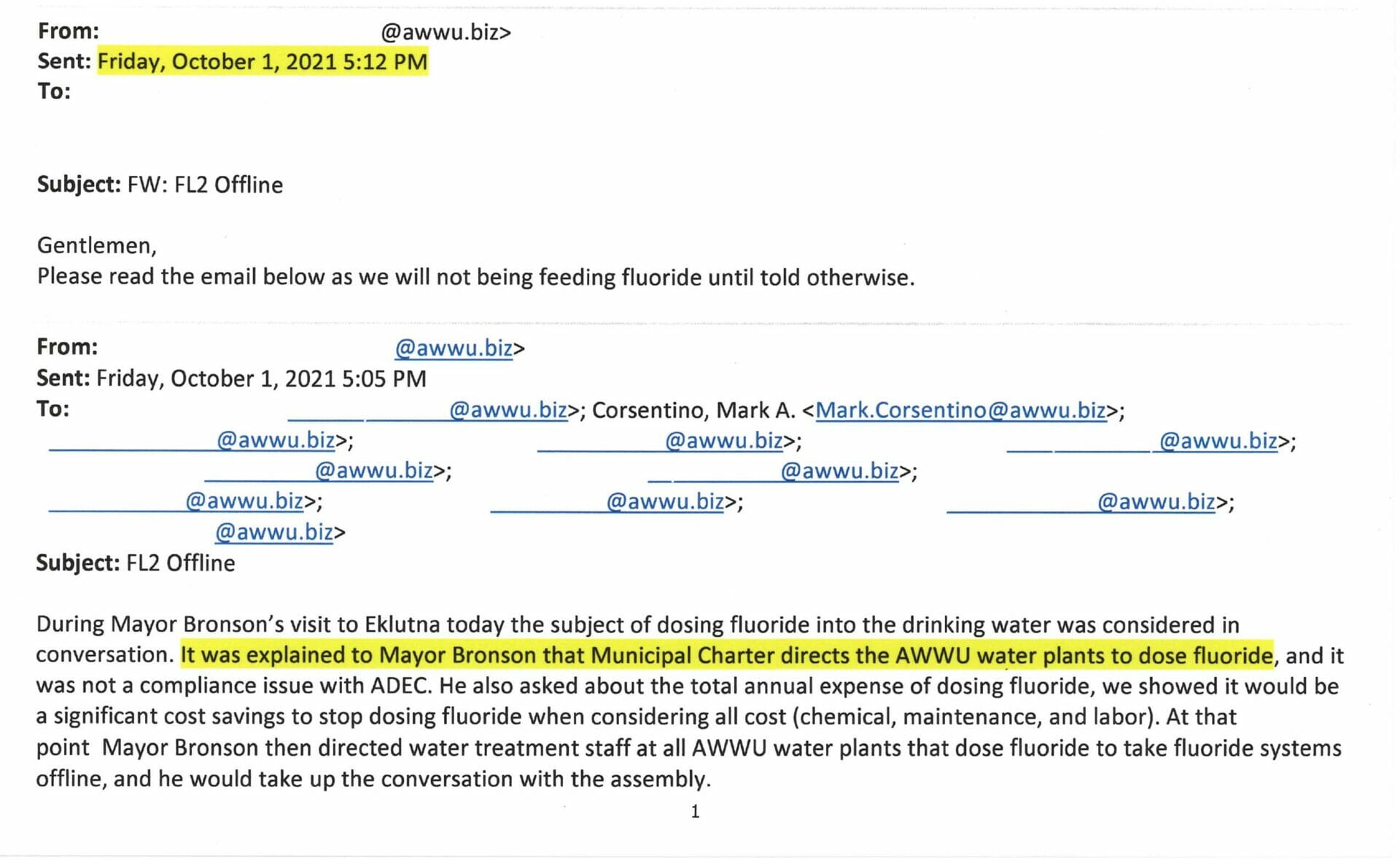 Corsentino replied soon after, CC’ing Deputy Municipal Manager Hickel. Corsentino stated that he had just spoken with Bronson and Demboski, and that while the two “support removing fluoride from our water,” they wished to do it legally. Corsentino continued, “Thank you for understanding any confusion this may have created, and we’ll continue to look at this issue to come up with a thoughtful sustainable path forward with respect to continuing to add fluoride to our water systems.”

Corsentino concluded by stating, “Thanks and have a great weekend, and excellent job by Eklutna staff on the tour given to the Mayor today, it was certainly exciting!” 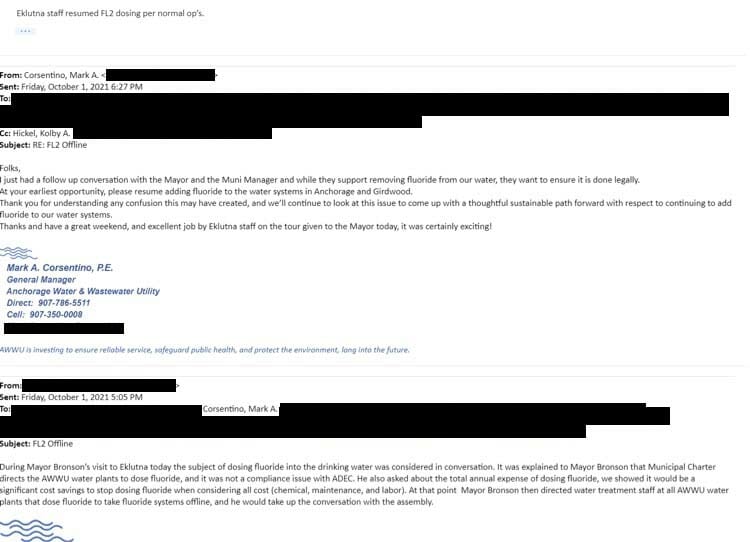 The Landmine reached out to Corsentino for comment but has not received a response.

The Landmine contacted Broson spokesperson Corey Allen Young on December 14 to ask why the Mayor’s office had initially denied that the fluoride incident had taken place, but did not receive a response.

Excellent work, Jeff. This is why Landmine is so important.

Demboski, Broson, and Hickel are all embarrassing themselves by continuing to lie like this. Just come clean and let’s get on with this.

Corey Allen Young is lying. Demboski is lying. Hickel is lying. This situation needs serious attention and an investigation NOW and if these claims are substantiated all three of them, at minimum, need to be removed from office for violating the public trust.

Bronson too. Tampering with the municipal water supply and then lying about it to the press and to the Assembly absolutely warrants removal from office.

What a lovely introduction to Hickel. I wonder what she was promised in exchange for “taking one for the team” and lying through her teeth about this. I hope it was worth at least as much as her reputation.

It’s time for Mark Corsentino and Chief McCoy to come forward and tell the public what actually happened here. It’s clear that the administration is not going to be honest about their actions and the public needs a truthful explanation of what is going on with APD and our municipal water supply. And Corey Allen Young and Kolby Hickel: if you are reading this article, don’t let your reputations and credibility in this small town be destroyed by your unethical, dishonest bosses. They are using you. You have a lot of your futures ahead and much to lose by continuing… Read more »

At this point, Corsentino is dragging himself into this. If he doesn’t blow the whistle, he is complicit. I don’t doubt he’s a good guy and concerned about his job, but this man is in charge of the safety of our drinking water and that needs to be the priority here. If the mayor illegally tampered with our water supply, we need to know. If Corsentino can’t be upfront about this situation then he really does not deserve to be in charge of our drinking water.

How are ya gonna spin this one, Corey? Lets really see you shuck and jive for Bronson!

Surprise, surprise. Not a word in those emails about employees complaining about burning eyes, burning throats, irritated skin, or making any complaint at all about handling the fluoride. Bronson wouldn’t be lying to us, would he?

Mayor Bronson just did a live video to explain why he deactivated the fluoride system:

antisemite
antiscience
Yet 50% of our neighbors think Broson is the best thing since
a good ole book burning.
Alaska
the last frontier of ignorance

Never has the adage: “The lunatics are running the asylum” been more descriptive than today in the Office of Mayor David Bronson. The concept of “command responsibility” was obviously never taught to Air Force Officer Bronson. Who does he think is responsible for this travesty? The poor shmuck “Actual Mayor” Demboski probably ordered to close that Flouride control valve? Don’t be surprised if that poor employee isn’t the person who is actually now fired by Demboski.
You can’t make this stuff up….

Demboski/Bronson can’t fire Corsentino or he will have no reason not to come clean about what happened at AWWU. That’s the funny thing about this: on paper, Corsentino serves at the pleasure of Demboski/Bronson, but in reality their administration badly needs him to prevent a scandal.

On the flip side, if these allegations prove correct… at a point Corsentino needs to be fired for being complicit in Demboski/Bronson’s tampering with our drinking water.

I think we agree that the lowest “totem” on the pole will pay the price for this latest Bronson shot into his own foot.

These idiot right-wingers don’t even know or understand the laws of this country. Why do morons continue to vote these idiots into office???

Bronson and Demboski both need to be removed from office. Whatever process is called for for removing the mayor (recall, the municipal equivalent of impeachment, etc.) needs to be initiated immediately. Both Bronson and Demboski have both irreparably and unapologetically betrayed the public trust and continue to do so every day this charade is allowed to continue.