Sources have confirmed that Governor Mike Dunleavy (R – Alaska) has sacked Jon Cook, the chair of the board of the Alaska Railroad Corporation. Sources also confirm that Cook is a supporter of the recall effort against Dunleavy. The Recall Dunleavy group held an event at Airport Equipment Rentals in Delta Junction on August 16. Cook is the CFO.

Cook’s term on the board was set to expire this October. His name has been removed from the State website that lists members of boards and commissions. He is still listed on the Alaska Railroad website. Former Governor Bill Sheffield, who was the vice-chair, will act as chair of the board until the board can select a new permanent chair. This is a developing story. 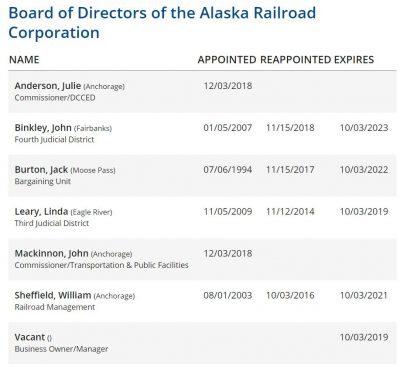 Someone grab the collar…the Governor is LOOSE!