On December 5, 2018 I sent two separate records request to the Department of Administration. One was sent to the new Commissioner, Jonathan Quick. The other was sent to Angela Hull, the Director of Correspondence and Constituent Services. They can both be seen here: 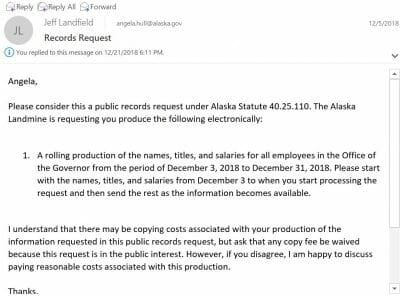 Everything I requested is public information. When I requested nearly identical information from the Walker administration, I received it three days later. The only difference in the requests was I asked the Dunleavy administration which of the exempt and partially exempt state employees had been terminated.

I called Angela Hull after I sent the request. She informed me she would be meeting with Amy Demboski and Jeremy Price, both Deputy Chiefs of Staff, the following week to discuss records requests. She told me she would be in touch with me after that. I have not heard back from her. Commissioner Quick also failed to respond to me. I sent him a follow up email today asking on the status. He replied, “Let me check.”

Alaska Administrative Code 96.325, Response to request; time limits, states that agencies have ten working days to respond to a records request. They either must provide the information, advise the requestor that the information is nondisclosable, or ask for an extension. It has been 13 working days since I sent the requests.

In contrast I sent another, unrelated records request on December 11, 2018 to Pam Day, who works in HR in the Department of Administration. She got me the information I requested on December 21, 2018, or eight working days after I made the request. Pam gets it.

Transparency is one of the most crucial things a government can do to ensure they can be trusted and held accountable. When a government fails to be transparent, people start to wonder what they are hiding. Maybe they aren’t hiding anything, but when they fail to be transparent it is impossible to to know. As a candidate, Mike Dunleavy repeatably said he was going to, “Restore trust in government.” He even wrote this opinion piece, Restoring Alaskans’ trust in government, four days before he took office. So far his administration is not living up to his campaign promise.

Asking about the past is offense. Why not ask who has been brought on and to which postions? A meeting of the minds is better than questioning wrong doing. That’s circular.

This is what you get when you have rank amateurs appointed to positions of administrative authority best suited for experienced professionals. Response to your request is an easy-peasy task. Inability to reply in a timely way to a simple lawful request demonstrates incompetence at best or direction from Tuckerman Babcock to withhold information at worst. Your experience is a small symptom of the major maladies we’ll soon be witnessing.

Warren, look at my comment above. The Walker Administration stonewalled Alaskans and legislators.

Hmmm, 3 requests, two responded two yet slightly late with full info and the third answered. All just prior to Christmas from a “new” administration….

Doesn’t sound quite as doom and gloom viewed that way. In the spirit of Christmas and with a New Year soon upon us, give them a chance.

The way I read the above Landfield made 3 requests and got 1 answered. The other 2 didn’t get him the information. Did you see something in the article I missed?

You should see the Open Records requests I sent to the Walker Administration and it took them weeks to respond initially. Then they finally gave me the data after months. Then it was in a PDF format which is pretty much unusable. Jeff, give the guy a chance. Or are you just another Andrea McCloud?

Did they tell you they needed an extension? The law is clear on this. If they did not follow the law then they were also wrong. The Walker administration complied with the law on every records request I sent.

Jeff, when Angela Hull talked to you that should be considered an initial response to the request. BTW, when you sent the “nearly identical information” request to the Walker Administration, was it 2 days after the governor was sworn in as in your request to the Dunleavy Administration?????

I called her, she did not call me. And it was the same day I sent her the request. I sent the Walker administration a request in mid-November asking for list of all EX and PX employees, positions, salaries, etc… I got it three days later.

But your request to the Walker Admin was well into the Administration, not 2 days after being sworn in, right? Did you ask for the number let go? That is probably protected information because it deals with a personnel file.

Vote Up0Vote Down  Reply
Why?

Why do you feel the need to defend this trash administration on this particular point?

This is nothing new with Angela Hull. I have never received my records request for
The previous administration -she no longer takes my calls. AMCO board did not send a “real records request” nor has the Governors office (when. Governor walker was in office. Although polite- Angela Hull appears to be willing to send information but does not. I have my documentation -if it helps with anything you may be planning