Dept. of Law memo concludes that binding caucus does not constitute bribery or coercion

A legal memo obtained by the Alaska Landmine, sent from the Department of Law to Senator Mike Shower (R – Wasilla), concludes that the binding caucus does not constitute bribery or coercion under Alaska criminal law. According to the memo, Shower asked the Department of Law whether the binding caucus violated Alaska’s coercion or bribery statues. The memo, written by Deputy Attorney General John Skidmore, concludes that:

Using the criminal code to regulate the inner workings of the legislature, as noted above, is not likely to be successful. Binding causes are political in nature and we believe the most direct avenue for change in this area is through the use of the political process.

Senator Shower introduced a bill and a constitutional amendment during the last session aiming to eliminate the binding caucus, claiming it is illegal. He held a press conference on February 12 to discuss both the bill and amendment. Since then, neither have had a hearing. Shower has frequently spoken against the binding caucus on Facebook Live videos and on talk radio. The memo is dated June 24. Since that date, Shower has continued to host Facebook Live videos and speak out against the legality of the binding caucus. The Landmine could not find any instances in which Shower acknowledged the memo.

After the general election every two years, members of the House and Senate must organize a majority in each body. This requires at least 11 members in the Senate and 21 members in the House. The majorities in each body are allowed establish caucus rules. The binding caucus rules have traditionally stipulated that members of the majority must vote for the final version of the budget and support the ruling of the chair. Nothing prevents a majority from forming a caucus that requires every member to vote in favor of the budget. The memo explains that elected officials get to determine the rules for the caucus they form, and that it is unlikely a court would interject on such an issue:

As a preliminary matter, legislators have a right to association that protects their ability to form caucuses and to enforce caucus rules. Alaska courts have held that the Alaska Constitution’s protection of an individual’s right to freedom of association also applies to political parties to “associate together to achieve their political goals.”2 Further, the notion of caucuses as part of the political process is embedded in the statutes related to legislative function. AS 24.60.037(c) specifically states that legislators may meet in a closed caucus to discuss “political strategy.” Under this section “political strategy” includes “organization of the houses, assignment of committee membership, scheduling of bills, vehicles for adoptions, house-senate relations, other procedural matters, caucus operations, meetings between majority and minority caucus leaders, meetings between majority and minority caucus leaders of both houses, meetings with the governor, deliberations with regard to political strategy, and discussions of issues in the context of political strategy.” These factors strongly suggest that binding caucuses are not only contemplated as part of the political process but generally protected under the Alaska’s Constitution.

You can see the memo here: 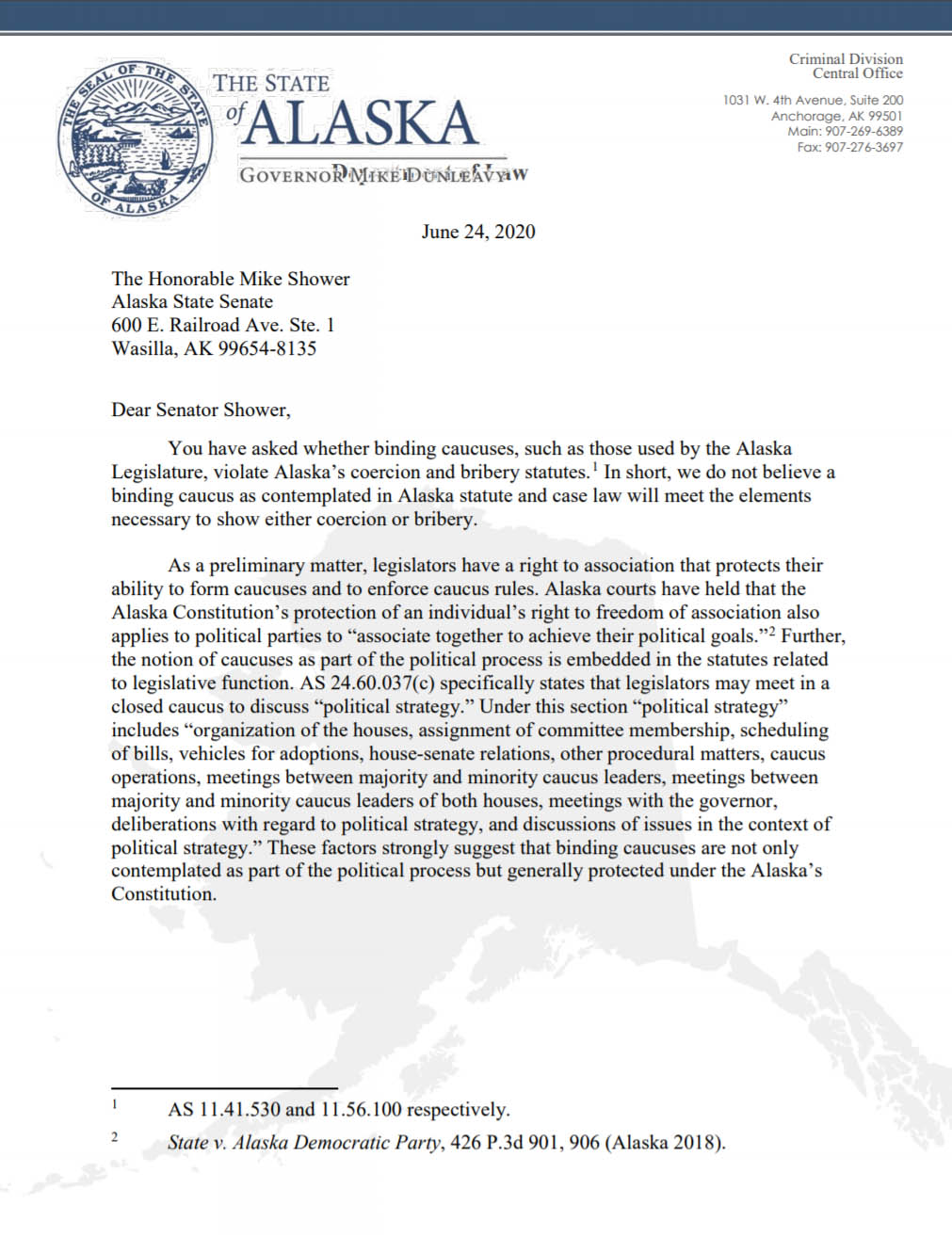 The standing caucus is a significant reason we will run out of savings in the next session. The standing caucus exists to sustain the “quid pro quo” which trades political power for state spending. (Ever wonder why the final budget appropriation isn’t agreed to until the last minute? (Hint: “Horse Trading”)). Secrecy of these “negotiations” is insured by the legislative exemption to state open meeting law. The standing caucus openly violates the Joint Uniform Legislative Rule 24 when it grants committee chair persons defacto veto power to kill any bill by simply refusing to hold hearings with no written justification… Read more »

Lynn we quite often disagree but I am with you on this one!