Death Threats Have No Place in Alaska Politics: What Happens When Political Rhetoric Goes Too Far

It’s political season, and it’s more charged than ever before. People are mad about about crime, they are mad about the dividend being reduced, they are mad about the economy, and some are just mad about everything. Some politicians tap into that anger and use it to win elections. It’s a lot easier to tell people who to blame for their anger or problems than it is to explain to them the complex solutions required to solve them.

Like many of his posts, it has been shared multiple times and there are lots of comments. But one comment went over the line – way over the line. It can be seen below: 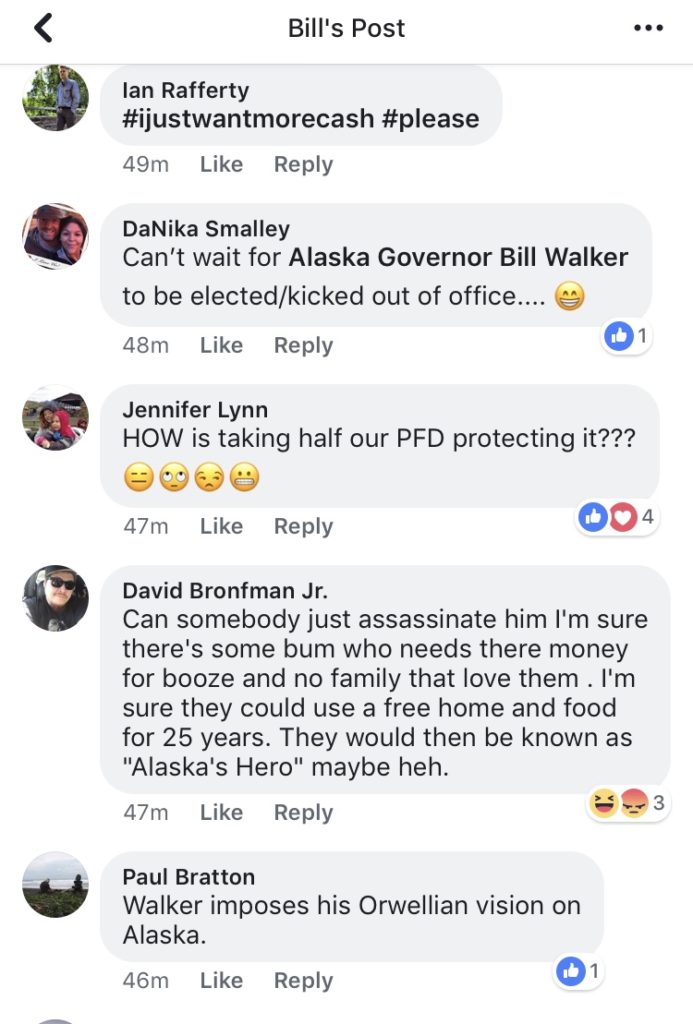 The comment has since been deleted by Wielechowski. When asked about the comment Wielechowski said, “We can disagree strongly on things, but there is absolutely no room for talk like that.”

I reached out to Governor Walker’s Chief of Staff, Scott Kendall, about the comment. All he would say is, “We take the first family’s security and safety very seriously. We therefore cannot comment on such matters.”

I’m not blaming Wielechowski for this or singling him out. It just happens to be that the comment was made on his post. While this comment is one of the worst I’ve seen, I see comments all the time on the pages of political candidates and political groups where people say horrible and nasty things about Governor Walker and many other Alaska politicians. I have seen images of politicians put in cross hairs. I have seen people suggest tarring and feathering politicians in public.

How have things gotten so messed up? I have an idea. Some political candidates and political groups seem to relish in calling Bill Walker a thief for reducing the dividend. Then they blame him for all of our crime problems. Never mind the rise in crime started before SB 91 went into effect. Never mind the legislature passed the bill before he signed it. Never mind funding for public safety has been reduced over the last several years. Talking about those things and explaining it to people is hard. It’s much easier to just blame all of our problems on one person.

How do politicians and campaigns who constantly call our governor a thief, and then blame him for all the crime problems, expect people to react? All it takes is one psycho who hears these kind of things over and over again to do something crazy.

The people who choose to use politically charged rhetoric to get votes should be ashamed of themselves. They know exactly what they are doing. Maybe they don’t fully appreciate the potential consequences, but they know what they are doing. We all need to do better than this. My fear is that as campaign season continues, the rhetoric will only intensify. I hope I’m wrong.

Joking about a tar and feathers for politicians is almost as American as apple pie…a favorite of old comedians like Will Rogers and Jack Benny..take a breath on that one, it’s innocuous and it’s not likely to stop anytime soon, nor should it.

Threats of assassination however, should be taken seriously, investigated, and prosecuted accordingly.

Thank you. This is thoughtful and I completely agree.

The post you have pointed as reads like it’s not really about killing anyone, but that David Bronfman jr, is making an attempt at that tired old notion that people only come and stay in Alaska for the PFD.

Thanks, Jeff. Pogo’s “We have met the enemy and they are us…” applies to most of those whiners and haters to whom you refer. Everybody is all about their Rights but NOBODY wants to accept their responsibility; Alaska used to be the land of the Free.,,now its a bunker full of Freeloaders. If Alaskans want to give $billions in corporate welfare to oil companies that will not start generating positive cash flow for years, kill a burgeoning film industry because they don’t like “Hollyweird Lib-rulls”, cut the Operating budget by $3.5 billions, cut the capital budget by billions, fail to… Read more »

I disagree that crime was as bad before they decided to let criminals go to save on jail time. Do you have stats? I disagree about stealing pfd. Government will just spend it like they have with their portion. No one can keep people from saying innopropriate things, as we’ve seen with our president. Can’t blame what is said on a public post—- you say you don’t blame anyone, yet you name whose post it was on. I’ve seen far worse on Trump—- not that it is right. I can see frustration with politicians not listening to their constituents &… Read more »