It was a normal October afternoon for employees and customers at Raspberry Roots, a marijuana dispensary located in Anchorage, Alaska. Or so they thought. After showing his ID a customer walked into the dispensary, looked across one of the glass showcases and said, “Uh… is that Don Young selling weed?”

It was in fact Congressman Don Young (R – Alaska), but he was not behind the counter to sell product. He was in the middle of an October 9, 2019 tour of several Anchorage businesses in the city’s growing marijuana industry. 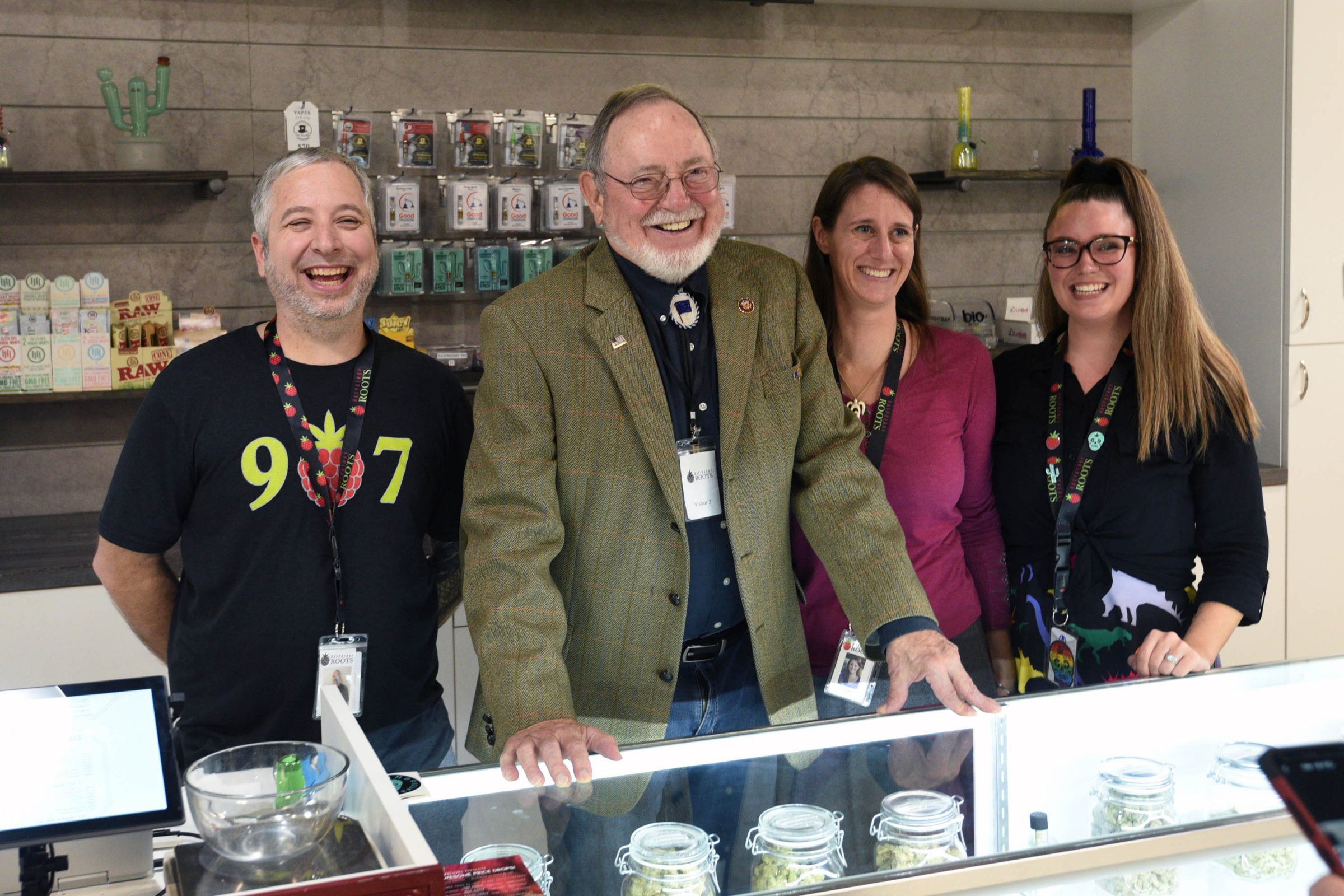 Young with owner Kim Cole and employees behind the counter at Raspberry Roots.

Young is currently the longest-serving member of the United States House of Representatives, giving him the title Dean of the House. He began his tenure during the Nixon administration. Now 86, he is a conservative Republican who unabashedly encourages drilling in the Arctic National Wildlife Refuge (ANWR) and supports President Donald Trump. Many might think him an unlikely ally for marijuana advocates.

But for Young, marijuana legalization is a states’ rights issue. Young told me, “I don’t think the federal government should impose their will on a state. And I’m a big believer in that. When I got involved in this I had some of my supporters say, ‘What are you doing?,’ and I said, ‘What I’m doing is doing what I believe in. You can’t be choosy. Either you are for states’ rights or you’re against states’ rights. You can’t pick one that you like and not have the other.'”

Alaska legalized the sale and use of recreational marijuana by ballot initiative in 2014, becoming the third US state to do so. The State Legislature, Marijuana Control Board and local governments handle constantly-evolving marijuana laws and regulations.

Young has sponsored pro-marijuana legislation with Congresswoman Tulsi Gabbard (D – Hawaii), who is running for president in the crowded Democratic field. According to this Politico article about the bills Young and Gabbard have sponsored, “The Ending Federal Marijuana Prohibition Act would take marijuana off of the federal controlled substances list, giving full authority to states to regulate the substance without federal interference.”

Young told me, “Tulsi and I have been friends for a long time. I just think she’s a great lady. We were talking about this, because she is a military person, and she knows the value to military people that need this. So we got together and introduced this legislation.”

Young has also co-sponsored legislation that relaxes banking restrictions on marijuana businesses. Currently, legal marijuana businesses have to handle all transactions in cash only due to federal drug restrictions, causing persistent concerns about business security and employee safety. The bill passed the House 321-103 with strong bipartisan support. Young said he recently spoke with Senator Mitch McConnell (R – Kentucky) and feels the bill has a good chance of passing in the Senate.

During the tour Young joked, “Truthfully I can say I’ve never smoked a joint–and I didn’t inhale either!” He added, “It’s not my interest, and I appreciate people that use it, and I understand the benefits for it. It’s just not my thing. I’m just saying if you are going to have a business you have to have the ability to run legally with all the benefits of other businesses.”

Young’s next goal is to address problems that employees who use marijuana face with employers who can’t hire them because of federal anti-marijuana laws, despite state-level legalization. Young said, “It makes it very hard to keep a strong work force. It doesn’t mean everybody has to be high. It’s just the fact they have it in their blood when they are tested. So they can’t work in certain facilities in this state.”

Stop one on the tour was Great Northern Cannabis’ cultivation facility. Jordan Huss, one of the owners, showed Young how they grow and harvest marijuana plants. 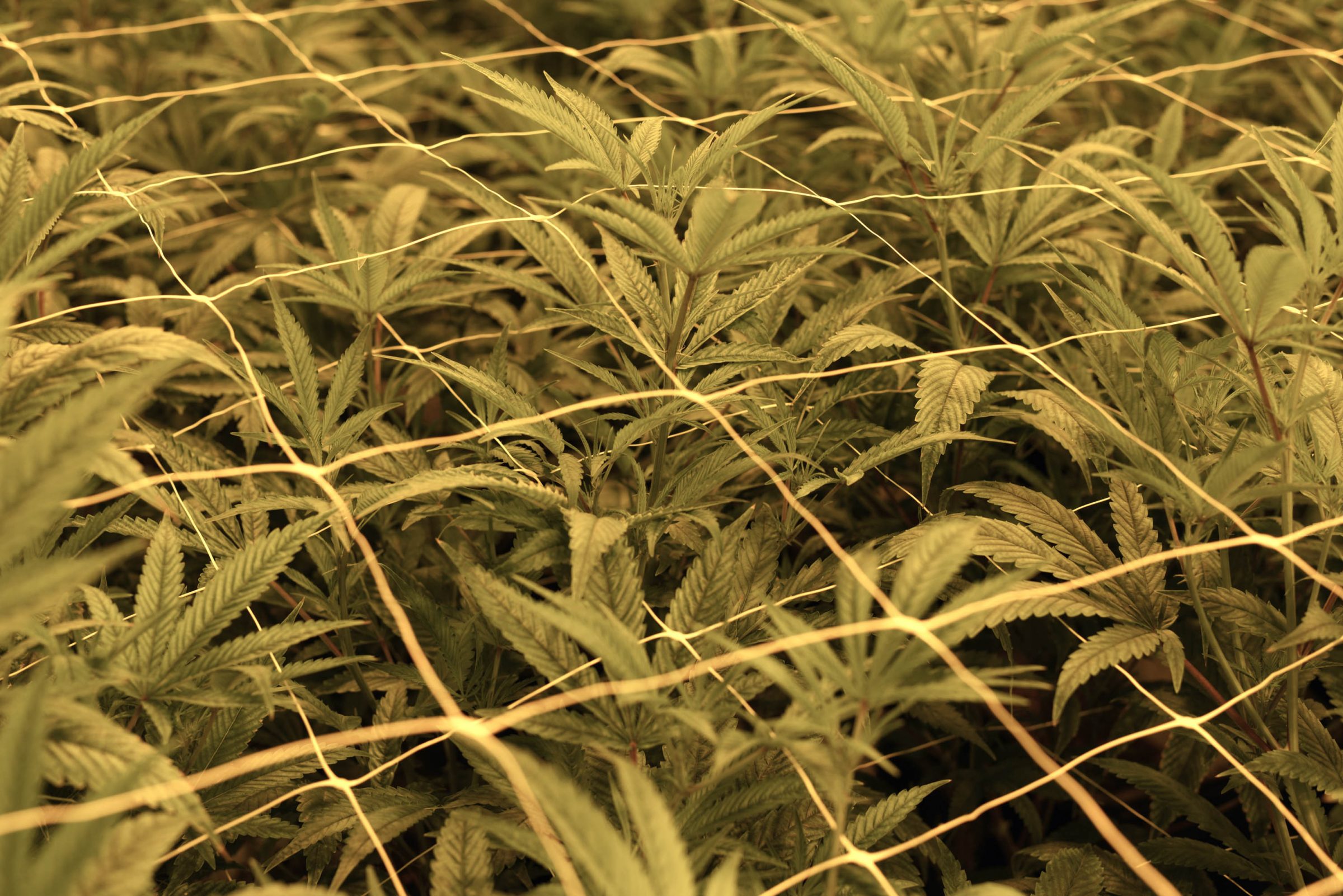 Young was impressed with the farming and quality of the facility, as well as how the product is tracked from harvest to sale. Huss said the facility currently harvests 120 pounds a month. During the tour, Young was handed a one-pound bag of marijuana. Young pretended to throw the bag like a football. 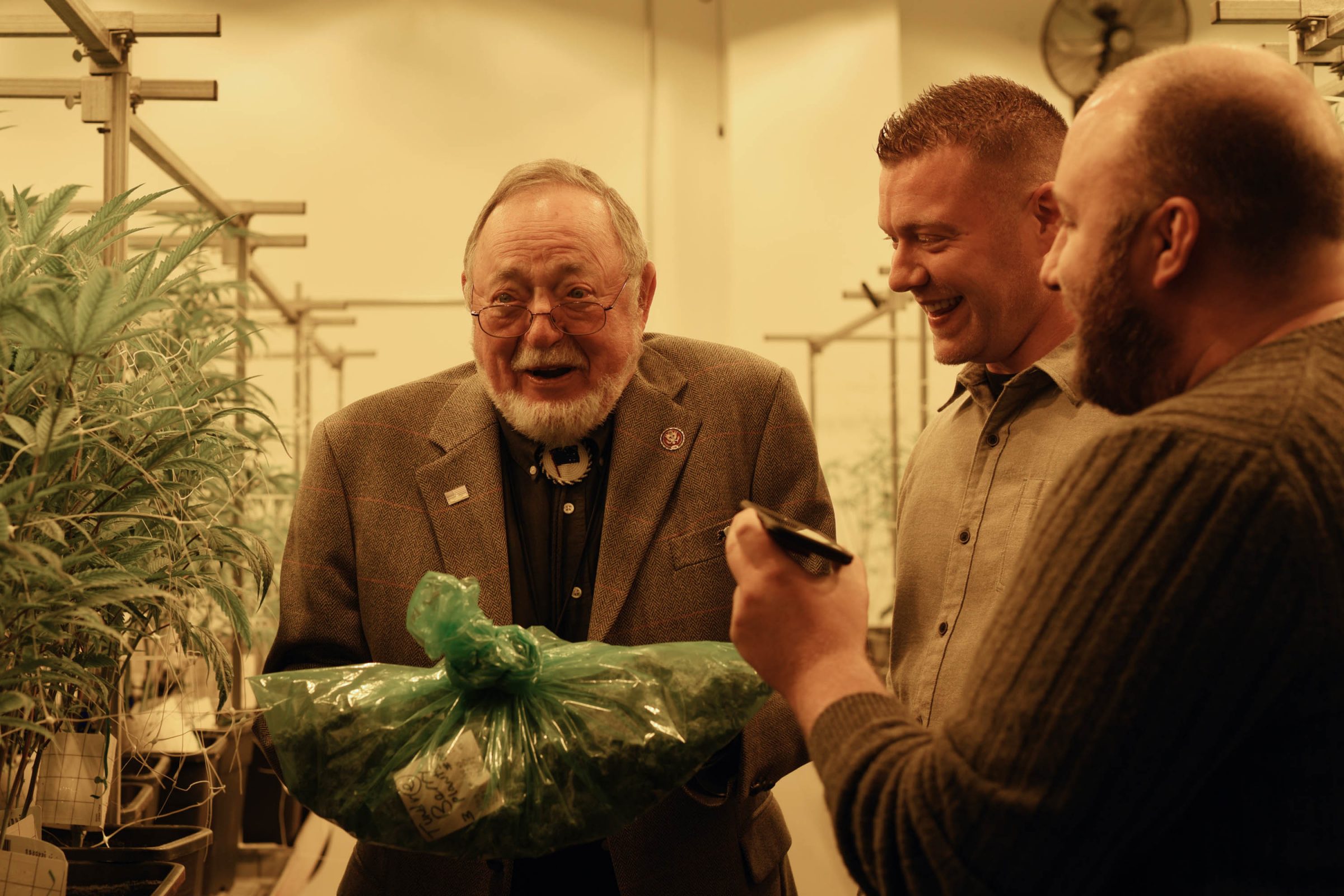 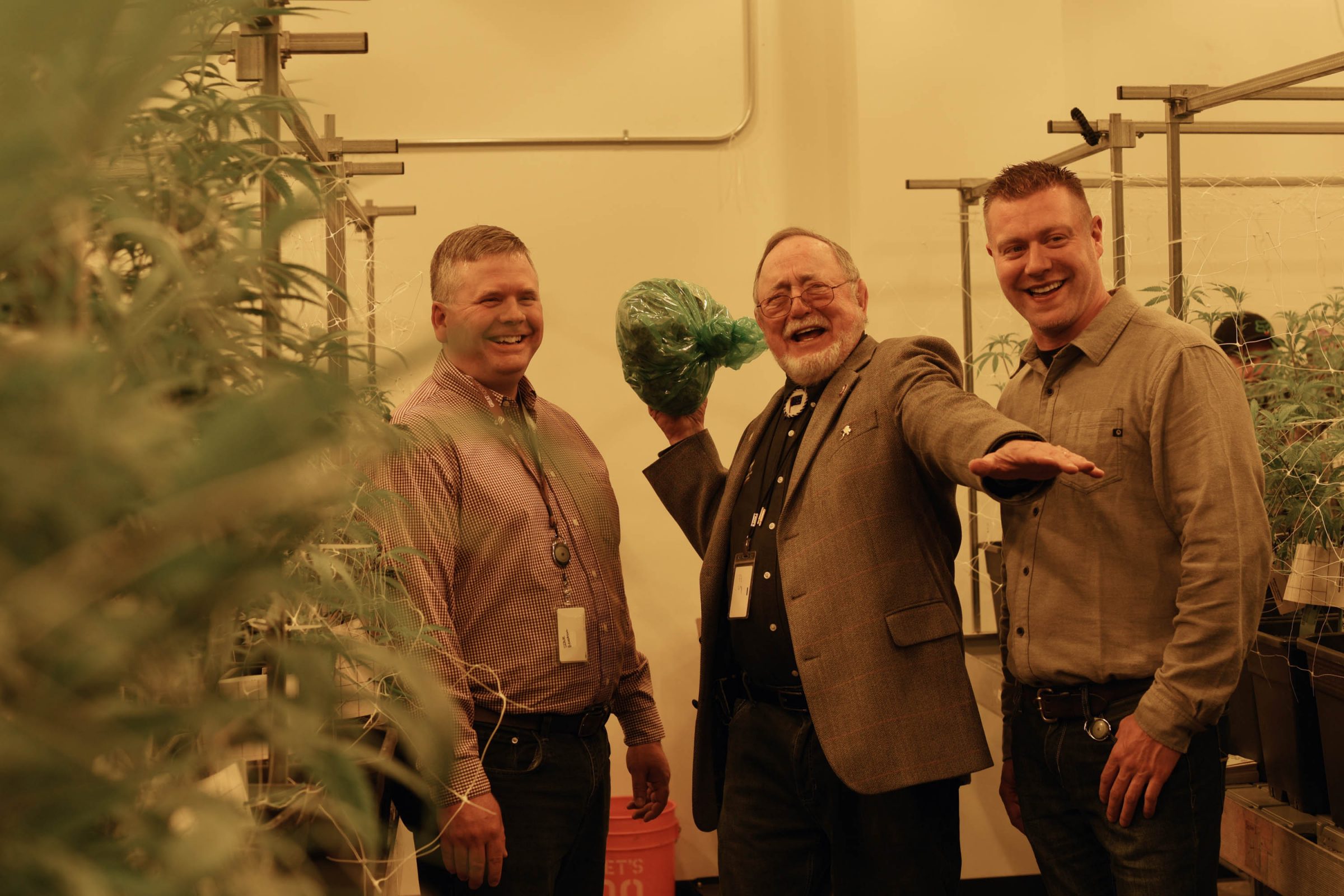 Young posing with a pound of award-winning Tundra Berry.

I asked Young if he had ever held a pound of marijuana before. He exclaimed, “I’ve never held a joint before!” 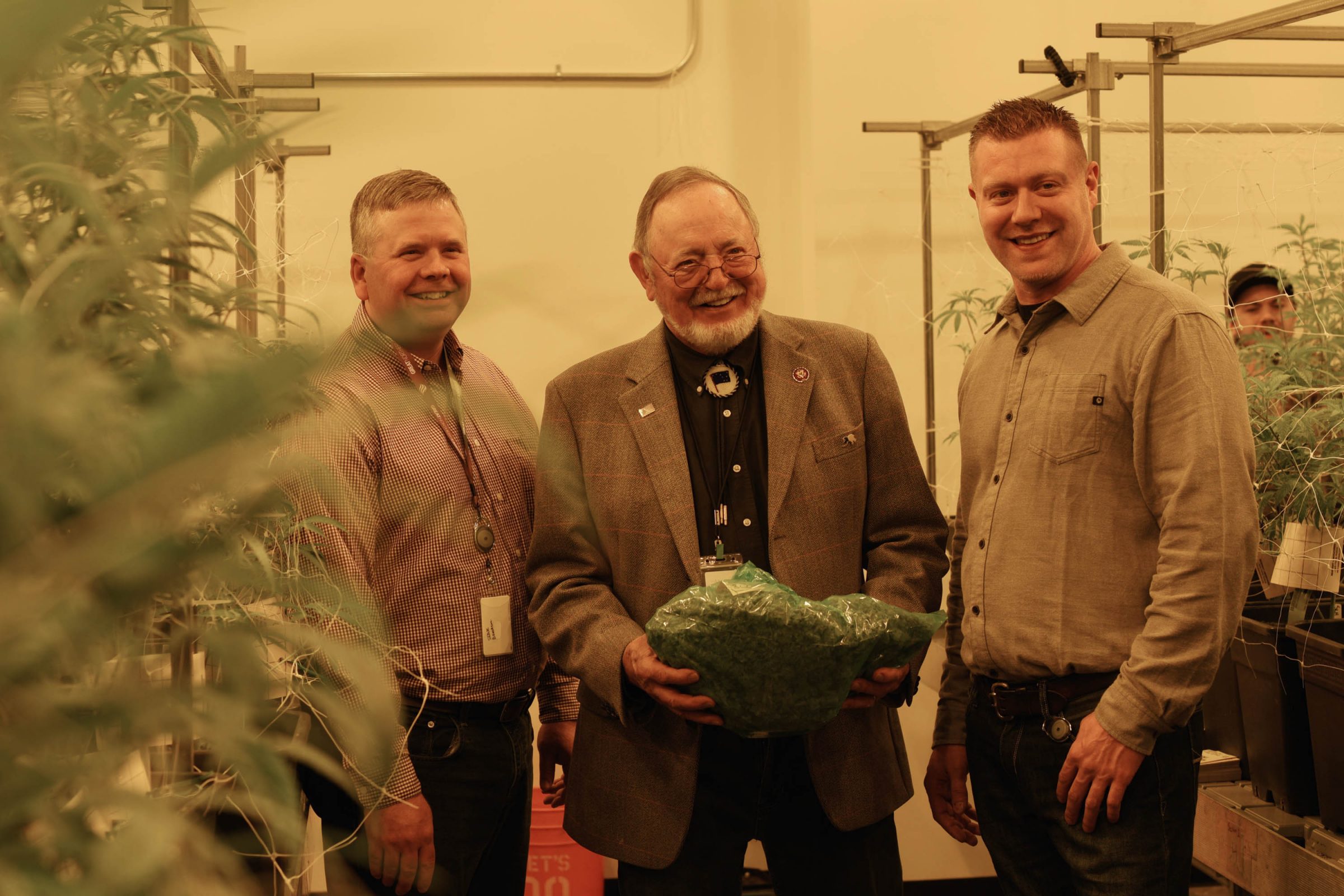 Stop two was the manufacturing and retail operation Raspberry Roots. Owner Kim Cole showed Young through the different aspects of the business. 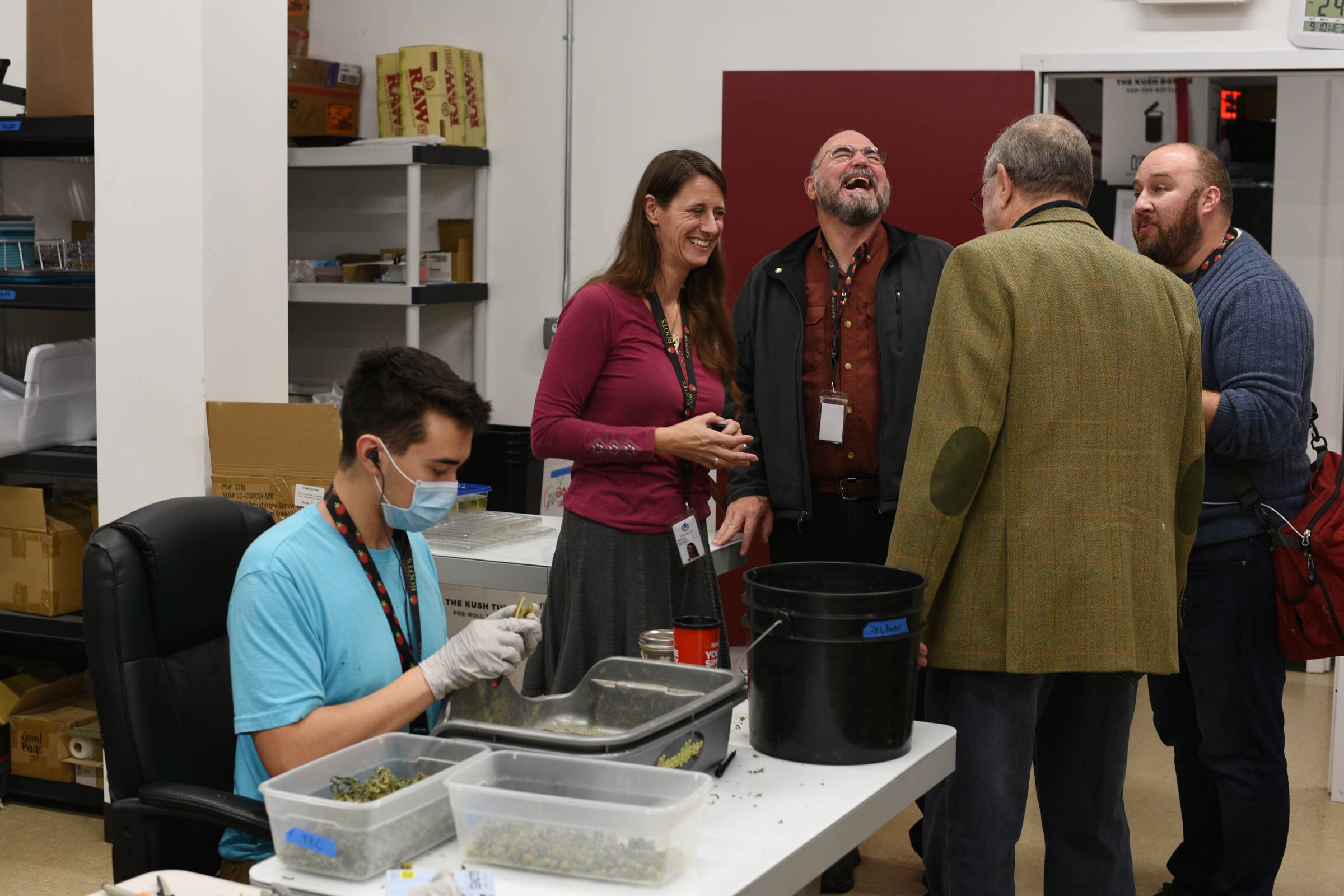 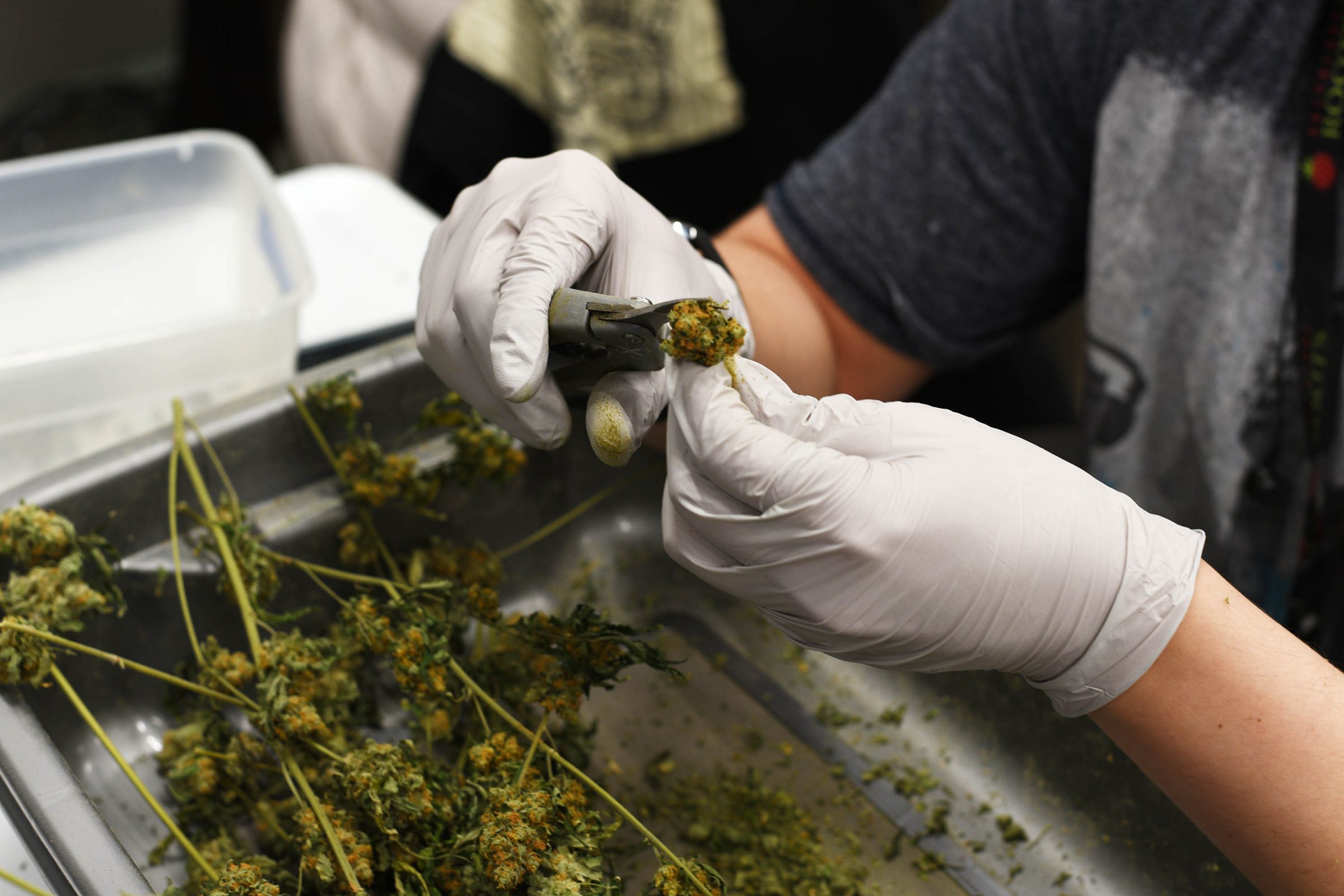 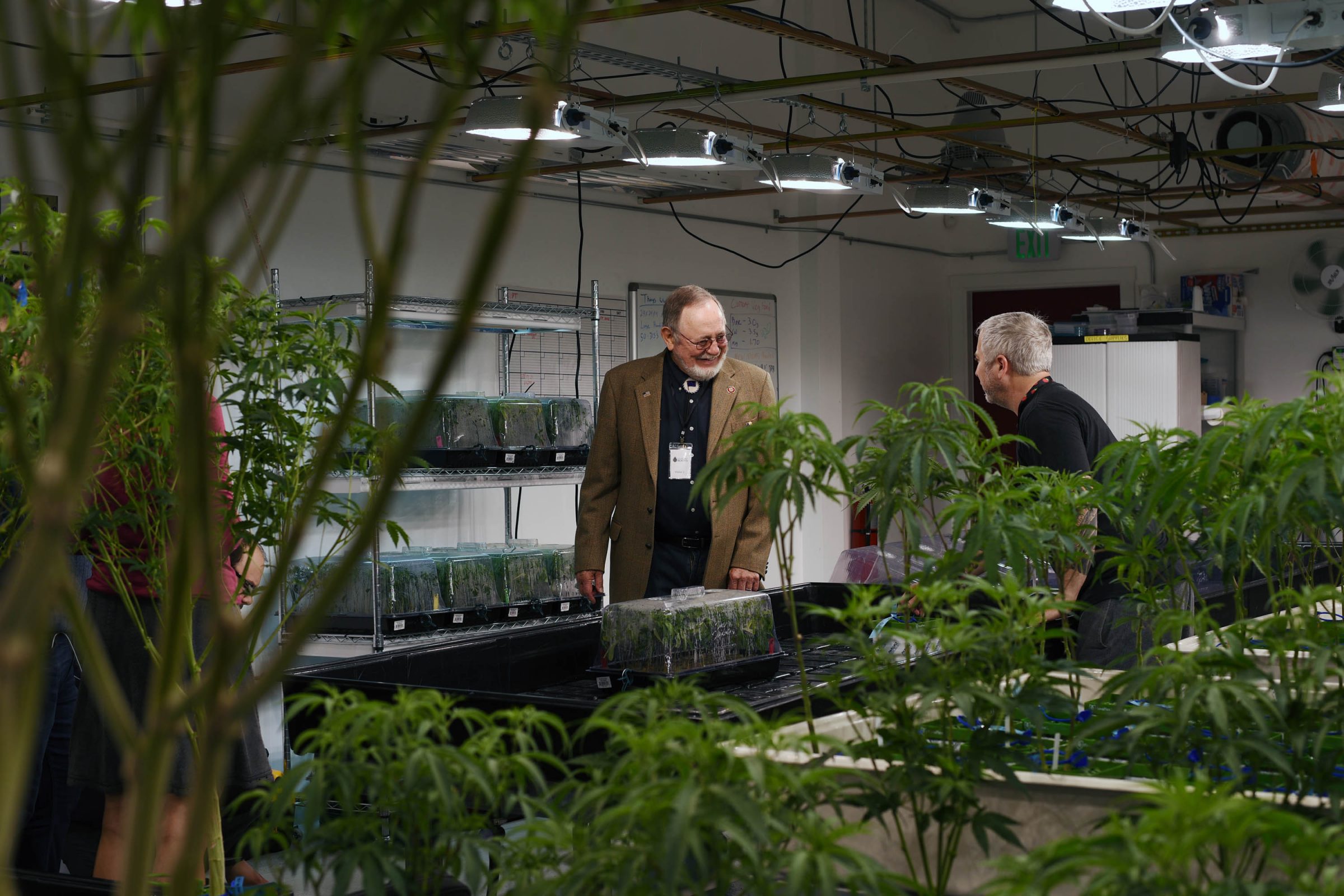 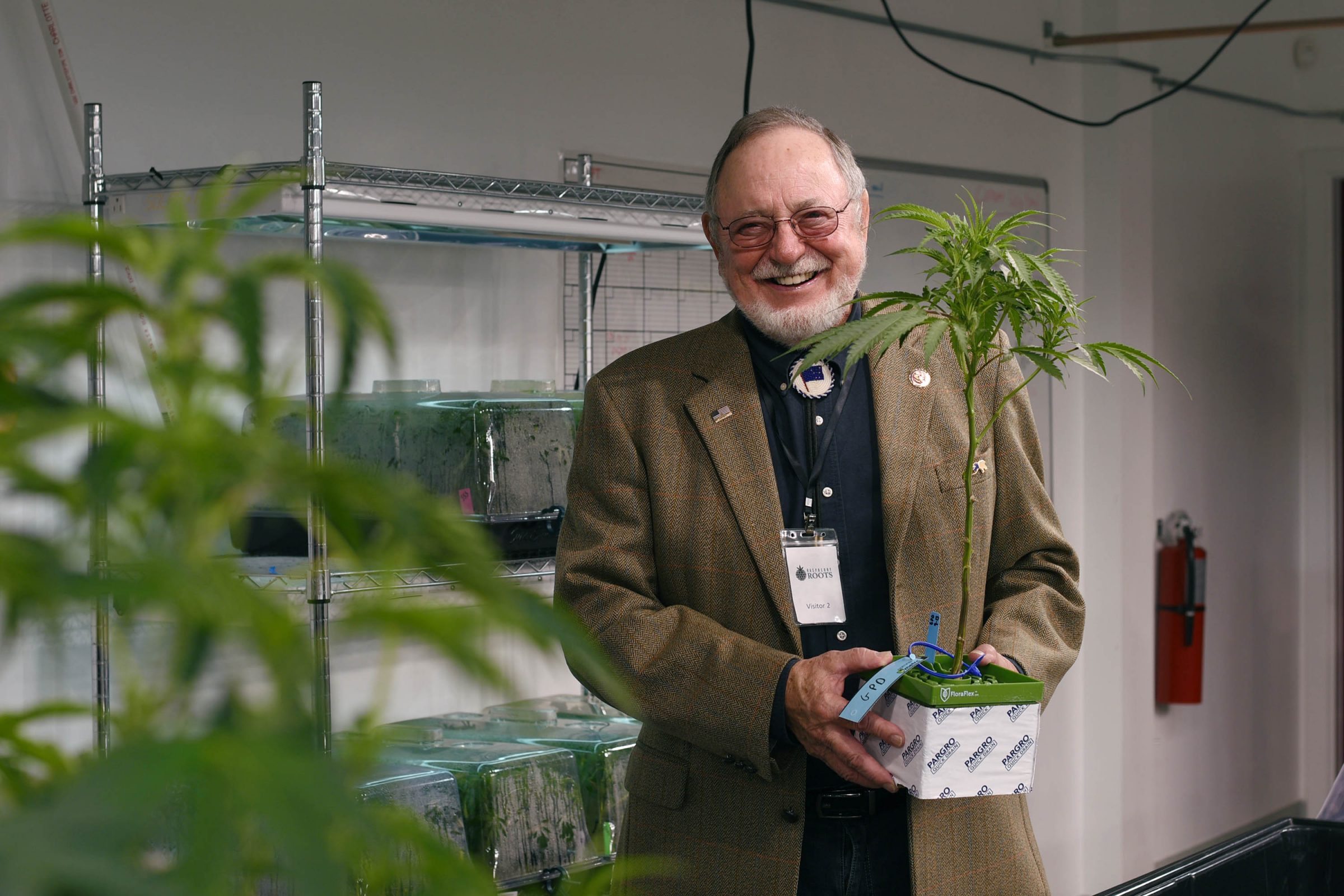 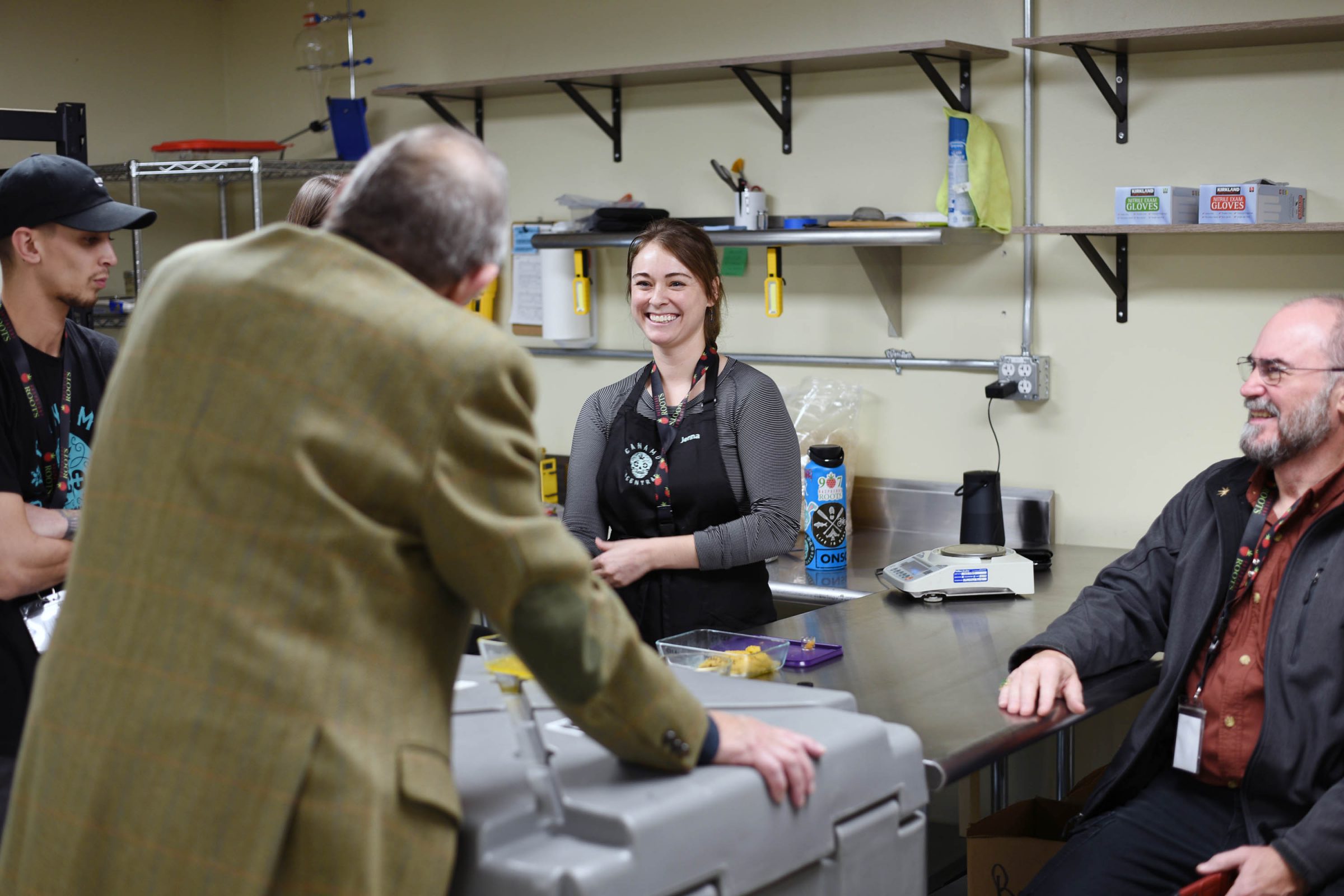 Cole, a former high school teacher, told Young, “Education is my number one goal with my budtenders to make sure that they can educate our customers.” Many of Cole’s employees also took part in explaining to Young the different parts of the business. At one point, an employee held up a jar of a strain called “Fruity Pebbles” for Young to smell. When asked how it smelled Young jokingly responded, “Let’s just say it’s a little different.” 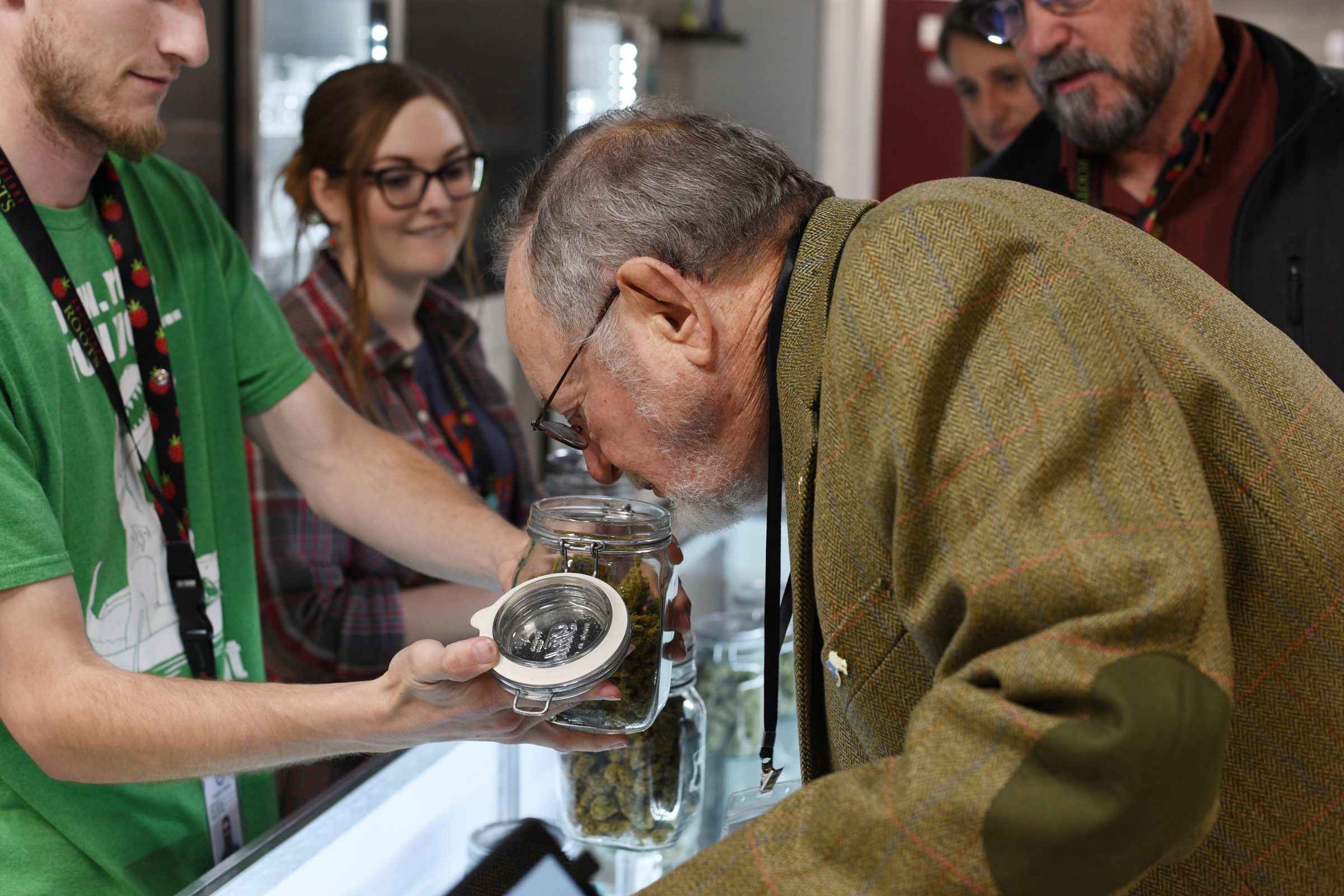 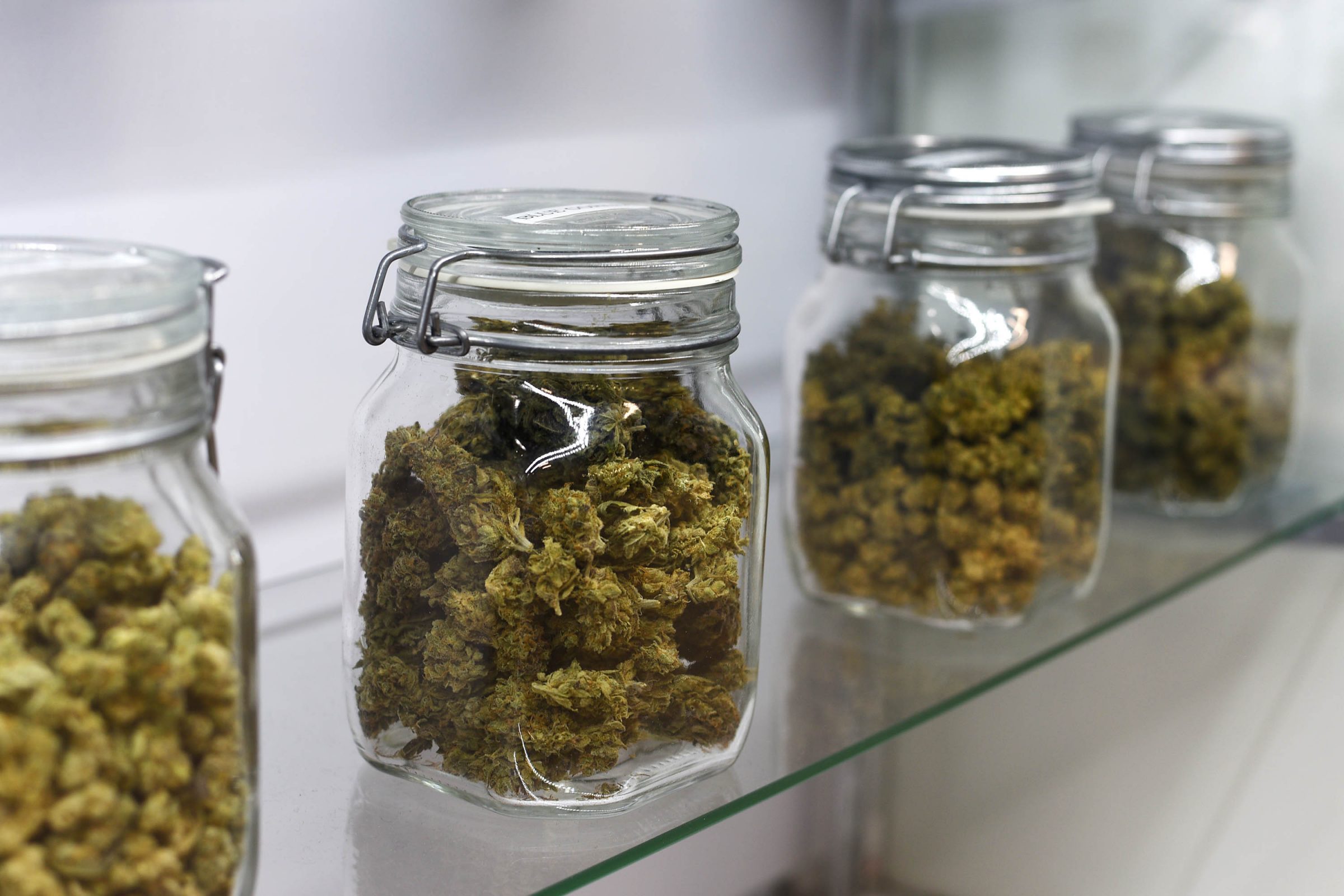 Jars of marijuana at Raspberry Roots.

Young was joined by his wife, Anne Garland Walton, on the tour. Walton, a flight nurse, frequently accompanies Young on official business. “I still have my nurse credential,” she said, “but now I have this 24-hour, rest of my life assignment. We can often be on 11 airplanes in 13 days.” Walton was also impressed by the facilities. She is not a marijuana user but she said, “I’m in favor of what it does for sick people.” 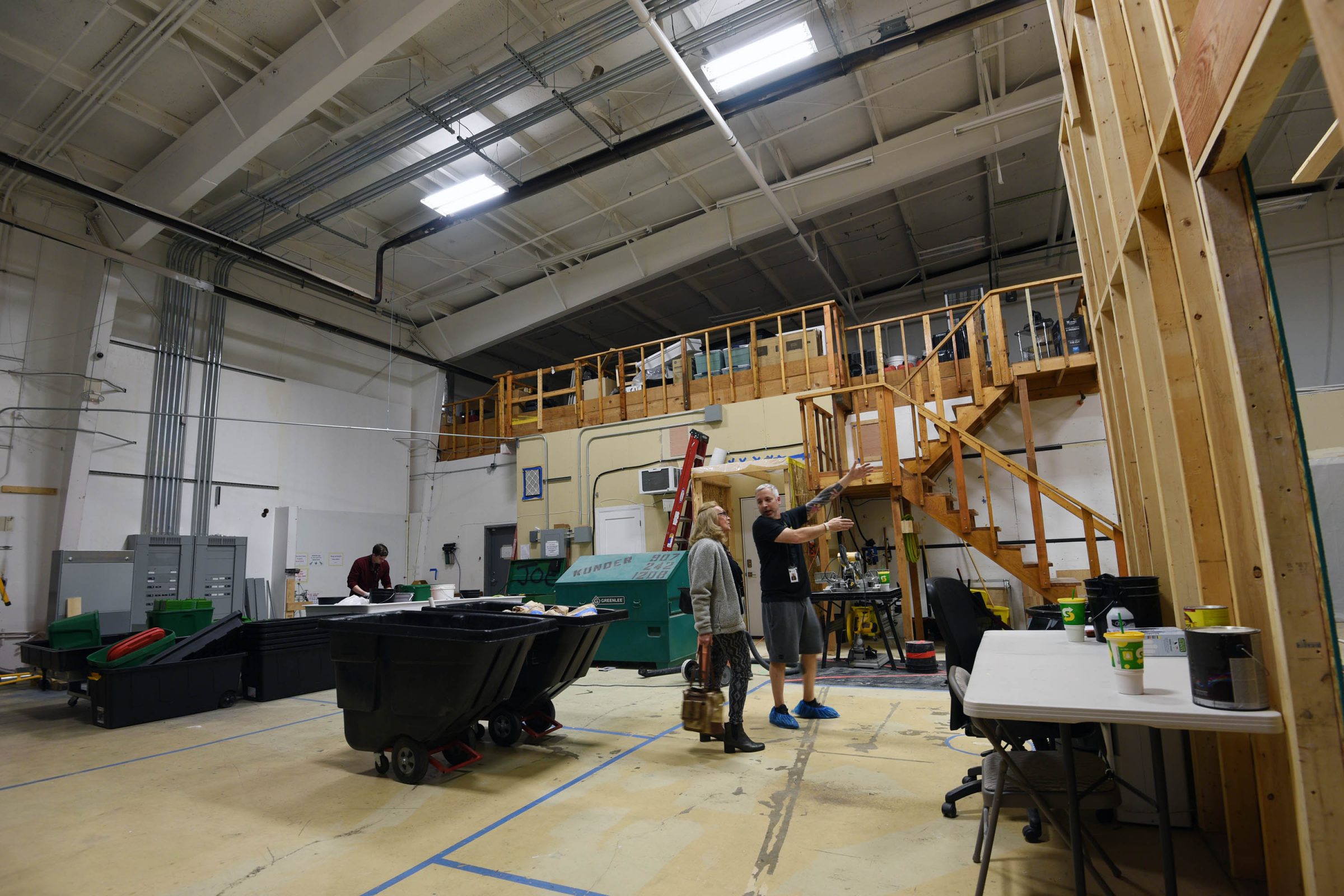 The third and final stop on the tour was Enlighten Alaska, a retail facility in Spenard. Co-owners Jane Stinson and her daughter Leah Levinton showed Young around the business. 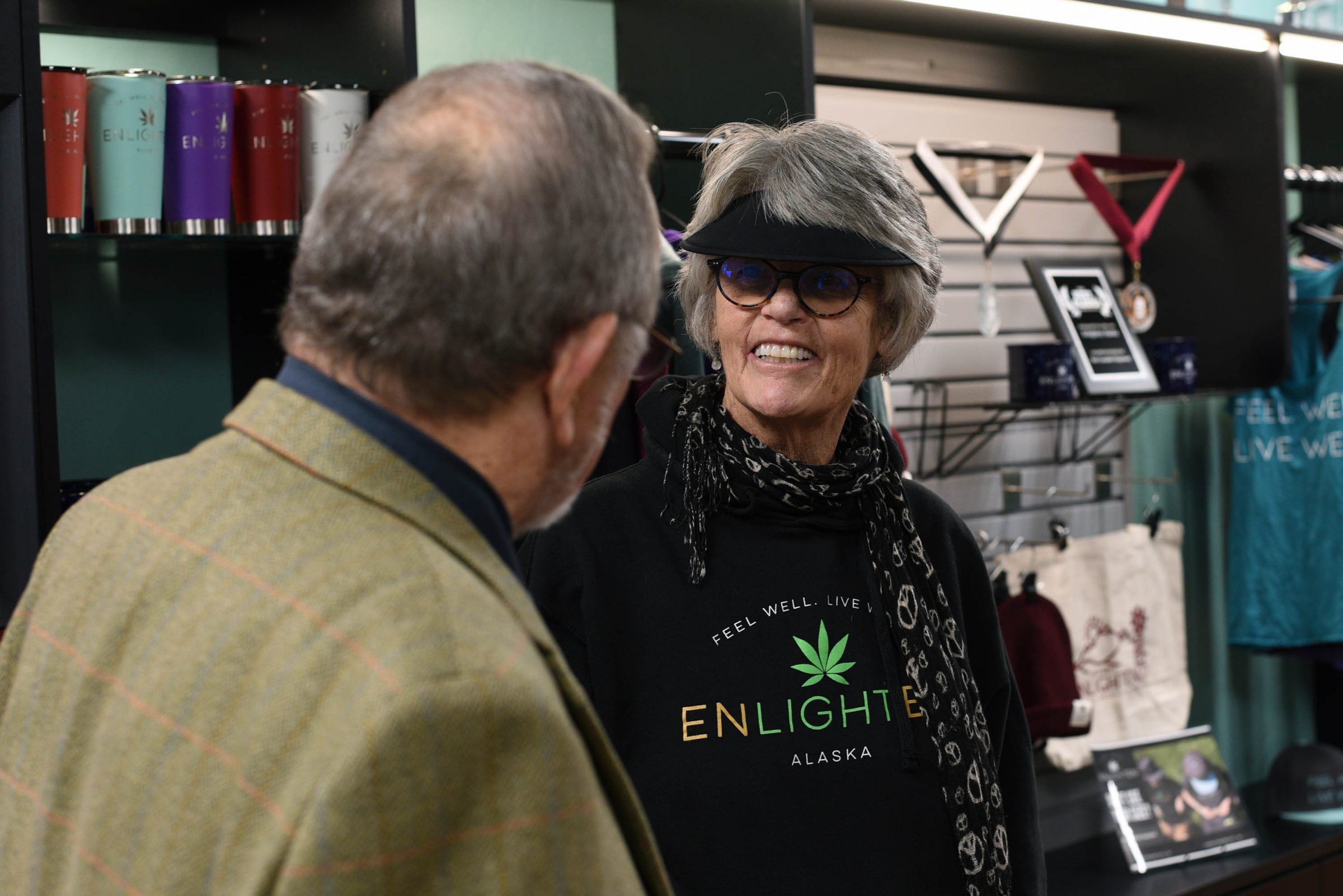 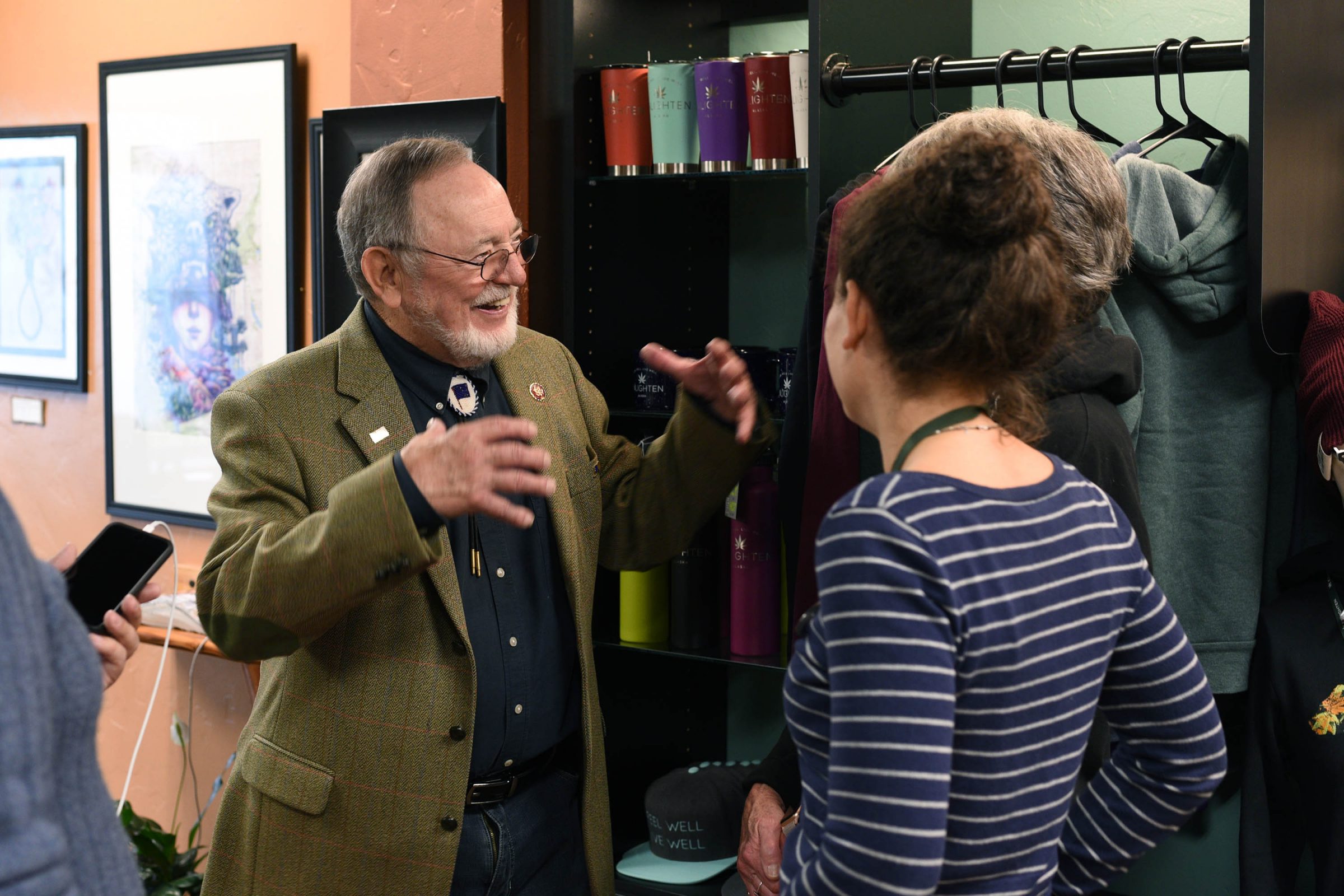 Young asked if the business attracted tourists. Levinton said it did but explained that consumption was a challenge. On-site consumption is currently banned in Anchorage, but there are efforts to find a solution. 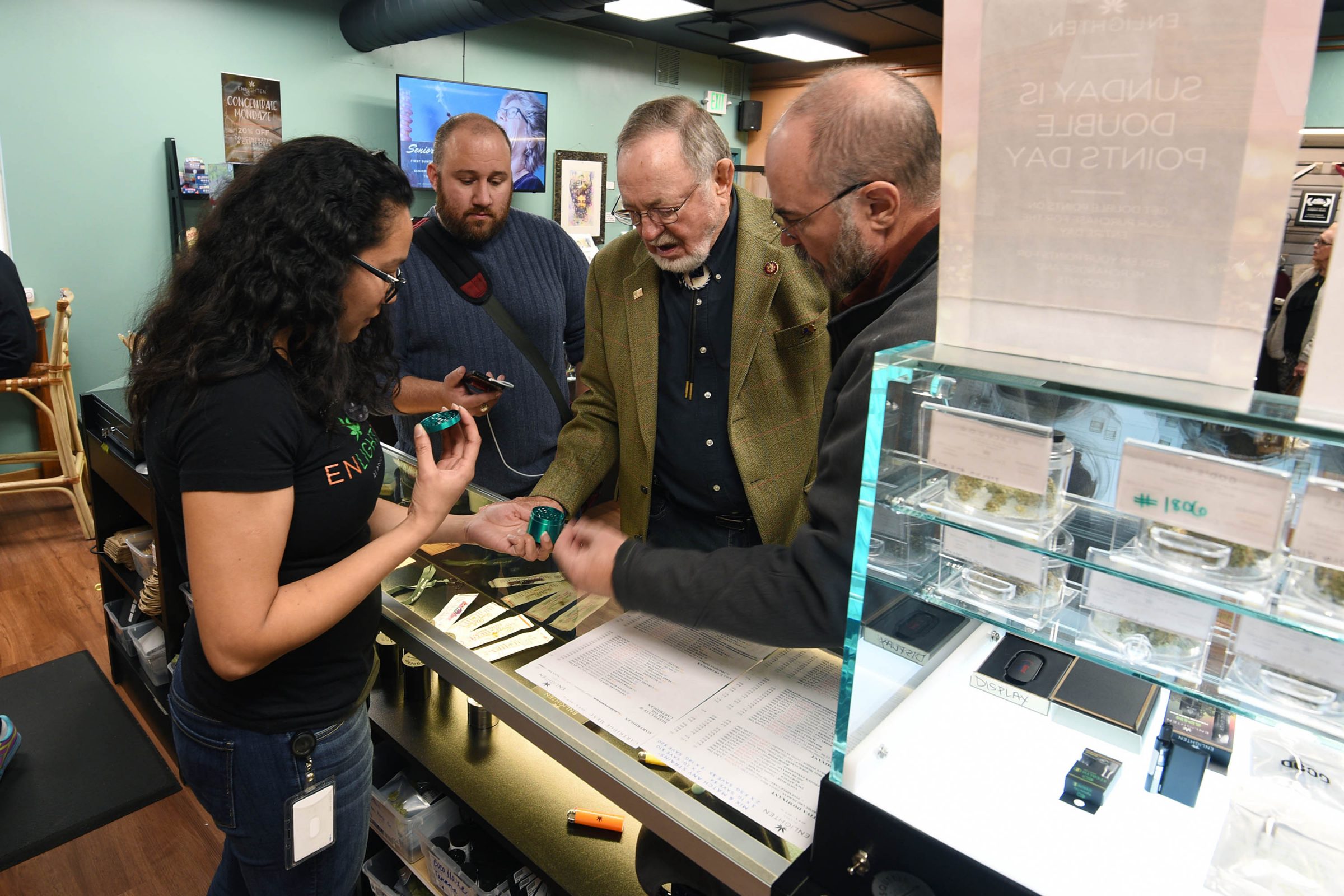 Young said he was impressed with the professionalism and layout of all three facilities. He also praised the caliber of the businesspeople he met and was happy to see how many people the businesses employ.

At the end of the tour Young told me, “One thing I love about this job is I learn something new every day. And to me that’s a great reward. This has been very informative.” Young said he enjoyed “learning what it’s about, how it’s being processed, how it’s being sold, how it’s being regulated–the whole bit. Most people don’t understand that.” 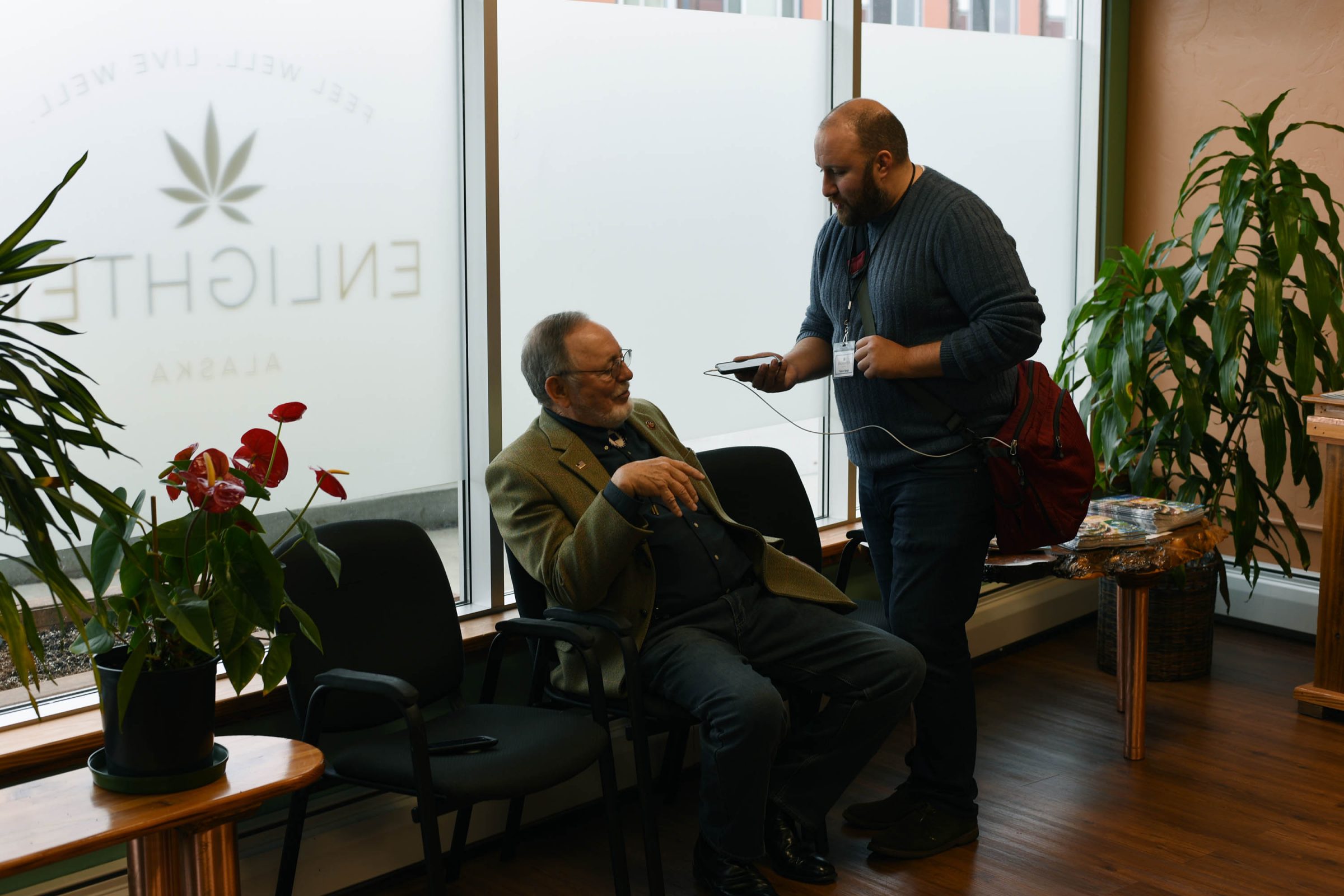 We would like to thank Congressman Young for letting us tag along and photograph his weed tour.

The photos in this article are available for public use via our Flickr gallery here.

This is pure gold

Don should try it. It might mellow him out, which he could use.

If you value your health, Do NOT buy ANYTHING from Great Northern Cannabis, they are shady AS FUCK. Knowingly selling moldy weed ? Really Jordan ? Profit is obviously more important than operating in an ethical manner. There is no excuse for endangering the health of your customers.