Public calendars released by Governor Mike Dunleavy’s (R – Alaska) administration show a series of meetings between members of the Permanent Fund Corporation Board of Trustees and Governor Dunleavy leading up to the firing of Angela Rodell.

Rodell, the former CEO of the Permanent Fund, was fired by the board on December 9, 2021 on a 5-1 vote. The sole no vote was William Moran. Dunleavy has stated that he had no part in Rodell’s firing and was not aware of it until after it happened.

There’s no evidence in the public calendars that directly contradicts Dunleavy’s statement. But they do show multiple meetings between Dunleavy, his cabinet members who sit on the Permanent Fund board, and other board members, without showing whether Rodell’s position was discussed. No one in the Dunleavy administration would respond to questions about what was discussed in the meetings or what they were about.

Dunleavy’s November public calendar shows a November 12 meeting with Craig Richards, chair of the Permanent Fund board, that lasted over an hour. Dunleavy had staff meetings listed before and after the meeting with Richards. He then he met with Kate Sheehan, Director of Personnel for the State of Alaska.

When asked about what was discussed at the meeting with Richards, Dunleavy’s spokesperson Jeff Turner responded, “The Governor meets routinely with APFC Trustees.” At a Legislative Budget & Audit Committee meeting on Monday, Richards would not answer a question about whether he had discussed Rodell’s firing with Dunleavy or any of his staff before it took place. Here is a summary of Revenue Commissioner Lucinda Mahoney’s November calendar; she is one of two Dunleavy commissioners who sit on the Permanent Fund board:

Multiple calls to Rieger to ask about the meeting went unanswered. Mahoney said she did not recall the meeting. 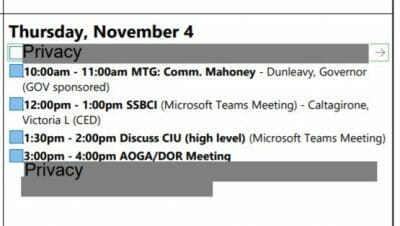 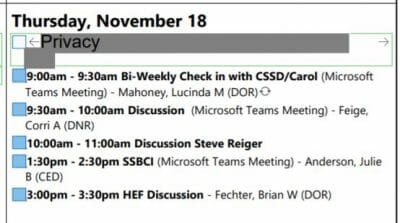 Here is a summary of Natural Resources Commissioner Corri Feige’s November calendar; she is one of two Dunleavy commissioners who sit on the board:

A call to Feige to inquire about the meetings was returned by a spokesperson for the Department of Natural Resources, who referred questions to the Permanent Fund Corporation. 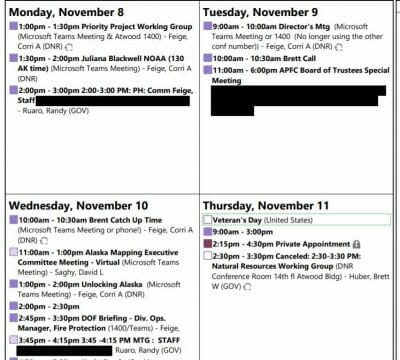 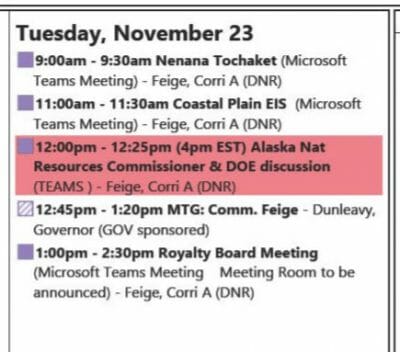 Mahoney and Feige’s December calendars show they were together in New York City from November 30 to December 3. They were there meeting with banks about arctic investment.

Feige’s December public calendar shows that she was in Reno, Nevada with Dunleavy at a mining conference on December 9 – the day the board voted to fire Rodell. Feige called into the meeting.

Attorney General Treg Taylor’s December calendar shows he took a personal day on December 9, 2021 – the day Rodell was fired by the board. He had a 30-minute meeting with Chief of Staff Randy Ruaro the next day.

The first precept of bona fide government service: Avoid any appearance of impropriety…

#piledhigh’s credo? No pile o shit too small to roll in …

Thanks again Jeff. Prima facia evidence but if you were to find a “Nixon Tape” of Dunleavy conspiring to fire Rodell – to what end? Remember this is Alaska where the spirit of Soapy Smith is alive and well.

Sunlight is the best cleaner! Keep up the FOIA grind.