Brad Keithley’s chart of the week: While those in other states became richer, how the median Alaska household became poorer

A recent article from Alaska Public Media’s Kavitha George is the trigger for this week’s column. The article, entitled “Alaska was the only state to see a decline in median income in 5-year census survey,” reports on the results of the recently released 5-year American Community Survey (ACS) data by the U.S. Census Bureau.

In short, as Newsweek put it, while most “Americans Became Wealthier Under Donald Trump,” Alaskans went backwards, suffering “a plunge in median household income.”

How did that happen?

While the Alaska Public Media article references various economic factors, it does not consider the impact of PFD cuts, which began in calendar year 2016 at the beginning of the survey period and continued throughout.

Turns out, that impact is hugely significant.

To analyze we calculated the average PFD cut from statutory levels over the same period as covered by the new ACS data – calendar year 2016 through 2020. Stated in 2020 dollars – the same as the ACS data – the average PFD cut over the period was approximately $1400, or stated on a median household basis, again the same as the ACS data, approximately $3000 per household.

Adding that amount to the median household income otherwise reported in the ACS demonstrates that if the PFD had been paid according to the statutory formula during the period, “real” (i.e., inflation adjusted) median household income in Alaska would have risen from 2016 to 2020, the same as in most other states, in Alaska’s case by approximately $1,500, or about 2%.

In addition, because of the highly positive impact of PFDs on lower income Alaska families, as in every other state Alaska poverty levels would have declined rather than “stay[ed] about the same.”

In short, even with low oil prices, job losses and all of the other head winds affecting the Alaska economy over the period, Alaskan families, like American families in most other states, still would have “become wealthier” overall had the statutory PFD been retained for the benefit of ALL Alaska families, rather than, as we’ve explained in previous columns, been cut and diverted as a means of protecting the top 20% against being required also to contribute an equitable share of their income to government.

Some will quickly point out that had the state not cut PFDs it would have needed to raise revenues other ways in order to plug the resulting fiscal hole.

That is true, although it would not have affected either the ACS household income data, which is calculated on a pre-tax basis, nor offset the positive impact on poverty levels.

But even adjusting for the need to raise revenues other ways, the median Alaskan household still would have come out ahead by maintaining the statutory PFD.

On average over the 5-year period covered by the ACS data, PFD cuts were used to divert approximately $900 million per year from Alaska families to government. Applying the same data from the 2017 and 2021 studies by the Institute of Taxation and Economic Policy (ITEP) that we have used in previous columns, we analyzed the impact of generating that same amount by other means.

Applying the share of income taken from that bracket under the various approaches we have analyzed in previous columns produces the following results:

The conclusion is clear.

And this result doesn’t apply just to the median Alaska household.

As we’ve explained before, the negative impact of using PFD cuts hits Alaskan households in other income brackets even harder. Because of the highly regressive nature of PFD cuts, in addition to its adverse impact on the median Alaska household, using PFD cuts also takes far more than the other alternatives from households in the upper middle, middle, lower middle and low income brackets – in total, 80% of Alaska families.

Compared to PFD cuts, here’s the impact by income bracket if the $900 million instead had been raised through the other alternatives. 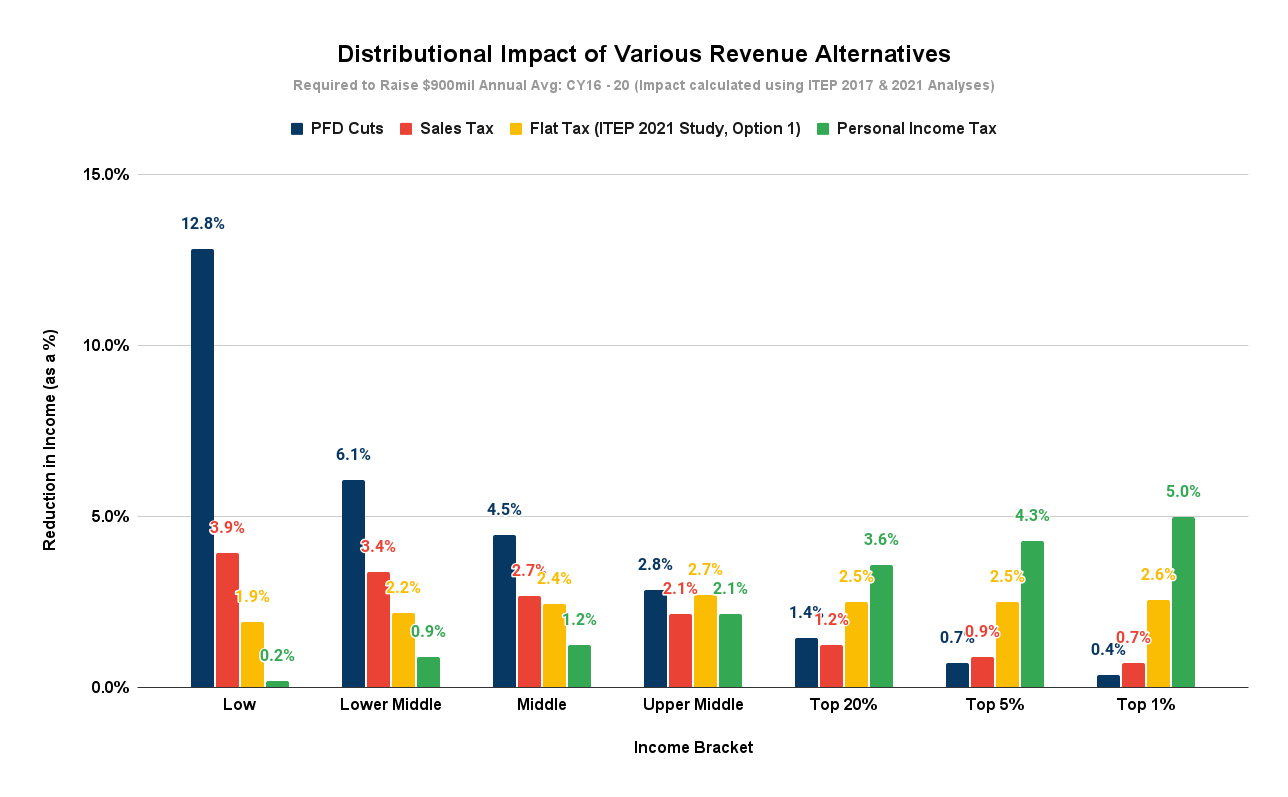 Even those brackets contributing more by using an approach other than PFD cuts still would have been fairly treated.

While some have lamented the decline of Alaska income during a period where the median household income of every other state at least stayed stable (according to the Newsweek article, as was the case with Wyoming and Puerto Rico) or grew (everywhere else), Alaska legislators have no one to blame but themselves.

Much lower impact alternatives were – and remain – in the Legislature’s tool kit.

In that sense, the economic decline of the median income Alaska family over the 5-year period was an artificial and man-made consequence, rather than the result of broader economic conditions.

Rather than some remote, uncontrollable economic force, the people Alaskans elected to office to look after their interests were the ones responsible. During a period over which the economic condition of the median household in every other state at least stayed stable if not improved, the Alaska Legislature went down a path that instead made the median and 80% of other Alaska households poorer.

Speaking of poor. I just got me Social Security estamate. $1090 at 62 per month. A life time of paying taxes and that’s my return. Thing of voting for D Democrats. Na. Pity party over and back to work.

So, in yet another week with a basically redundant set of graphs we arrive at the same conclusion: Give the PFD to lower income families. There is no other alternative. If you don’t want to hand out the money to those who benefit the most then save it for future generations of Alaskans.

🤷 Your comments inspire us to keep writing about the issue until you (and others) get the actual point, which is that of all the various revenue options, PFD cuts are the most inequitable and have the “largest adverse impact” on 80% of Alaska families (not just lower income) and the overall economy. If we need revenue, there are far more equitable and economically positive ways.

Brad,
Thanks for your efforts. I see your argument as “apples” and “oranges”. Rather disingenuous to classify a “cut” as lack of revenue. The State already has the revenue, and your complaint is how they distribute those dollars. Gleaning more revenue is an entirely different topic. Again, I don’t see how many ways you can keep presenting the same argument. Just “means test” this government largess and be done with it!

Both the 2016 ISER and 2017 ITEP studies view PFD cuts – the diversion of statutorily directed private sector revenue instead to govt – economically as revenue to govt, and compare its effect to alternative revenue approaches.

While we can understand why the Top20% want to view it differently – it diverts the focus off of the huge benefit to them of using PFD cuts – we view it the same as it is in the ISER and ITEP studies, the economic equivalent of revenue.

The Supreme Court has ruled the PFD amount is created by legislative appropriation. In fact, the specific amount is no more “statutorily directed” than any other budgetary line-item appropriation. You can’t lose revenue you could never realize. If so, the individual might have a claim to, for example, offset the loss of a promised PFD amount against taxable income. I can’t deduct Dunleavy’s promised PFD amount or the amount in any statutory formula because it doesn’t exist.

🤷 As we said, we understand why the Top20% want to view the issue differently (and create rationalizations for doing so). All the Supreme Court said was that the legislature could redirect the amount through appropriation; it did not void the statute.

Us? We’re going to stick with the economists who have looked at the actual economics of the impact.

And – as I was reminded by others – not even the legislature itself thinks the statute has the non-effect you ascribe to it. Legislative Finance continues to refer to it in budget presentations as “current law,” and various legislators themselves continue to try to replace it with other statutory approaches. Ways & Means in particular has heard several bills this Legislature to do so, and currently seems to be pushing a statutory replacement that would incorporate POMV 25/75, with the redesignation of the remaining amount to K-12. If a statute has the non-effect you ascribe to it, there would… Read more »

Apparently, the State Supreme Court didn’t care much about what the litigants’ “thought” in their demand for a “statutory amount of PFD outside the appropriation process. What the legislature “thinks” is not that important when that thinking violates the State Constitution. This latest “work around” might well see a repeat decision by the Court. Anyway, looking forward to another graph.

A splendid idea. To keep it fair, let’s apply the same resource test to all distributions from Permanent Fund earnings.

If you realize a certain amount of income in a year (say $50,000?) you don’t get a PFD and you don’t get free state services funded by PF earnings.

This way we’re not inflicting taxable income (a PFD) on Alaskans who don’t need it, or nontaxable income (PF-funded services that plump up bottom lines) on a Texan oilfield baron or a wealthy Alaskan influencer who doesn’t need it.

You make a point of using the term “PFD cuts” repeatedly to make your ad nauseum argument for bigger PFDs. Funny, doesn’t that parallel Dunleavy’s rhetoric? Median family income is going down here because of our job losses and statewide worker exodus. How’s that “Open for Business” workin’ for ya. Mike?

The argument isn’t specifically for bigger PFDs. It’s for equitable distribution of PF earnings, which are statutorily dedicated to the welfare of all Alaskans & trace back to a natural resource that’s constitutionally dedicated to the same purpose. Our blind insistence that our only revenue option is to live on savings bestows a disproportionate benefit upon the top earners who decide how our Permanent Fund earnings are spent. But the benefits they’re skimming for themselves — while inflicting pain on 80% of Alaskans of lesser means — pale in comparison to the amounts they’re dedicating to free services for the… Read more »

Don’t tax me while you are still giving out money for nothing.

The medium households in AK are mostly dumbasses who voted or didn’t vote at all for elected officials who don’t represent them.

The median household in Alaska is headed by folks who are busy with work & families. Putting food on the table and taking care of the kids takes priority over political analysis for most. So yes, “they” are vulnerable to populist messaging by those who are out to plunder Alaska’s wealth. But “they” are also “us”. Blaming our economic & political dysfunction on them rather than self-interested policymakers and officials who can’t identify an ethical violation even when it has its teeth buried in their asses isn’t going to resolve anything.