This week we take a look at the FY23 budget as it transitions from the House to the Senate – roughly the midpoint in the legislative process – and hi-lite what appears to be yet another shift underway in the legislative treatment of the Permanent Fund Dividend (PFD).

Over the past five years traditional Unrestricted General Fund (UGF) spending (UGF excluding the PFD) has averaged around $4.7 billion per year. This year it appears headed up, although adjusted to compare apples-to-apples, not dramatically so – at least not yet.

For context, below is a chart covering the past 5 years (FY18 – 22) plus FY23 through the steps taken thus far this session – Governor Mike Dunleavy’s (R – Alaska) amended budget, House Finance as passed, House as passed, and Senate Finance. 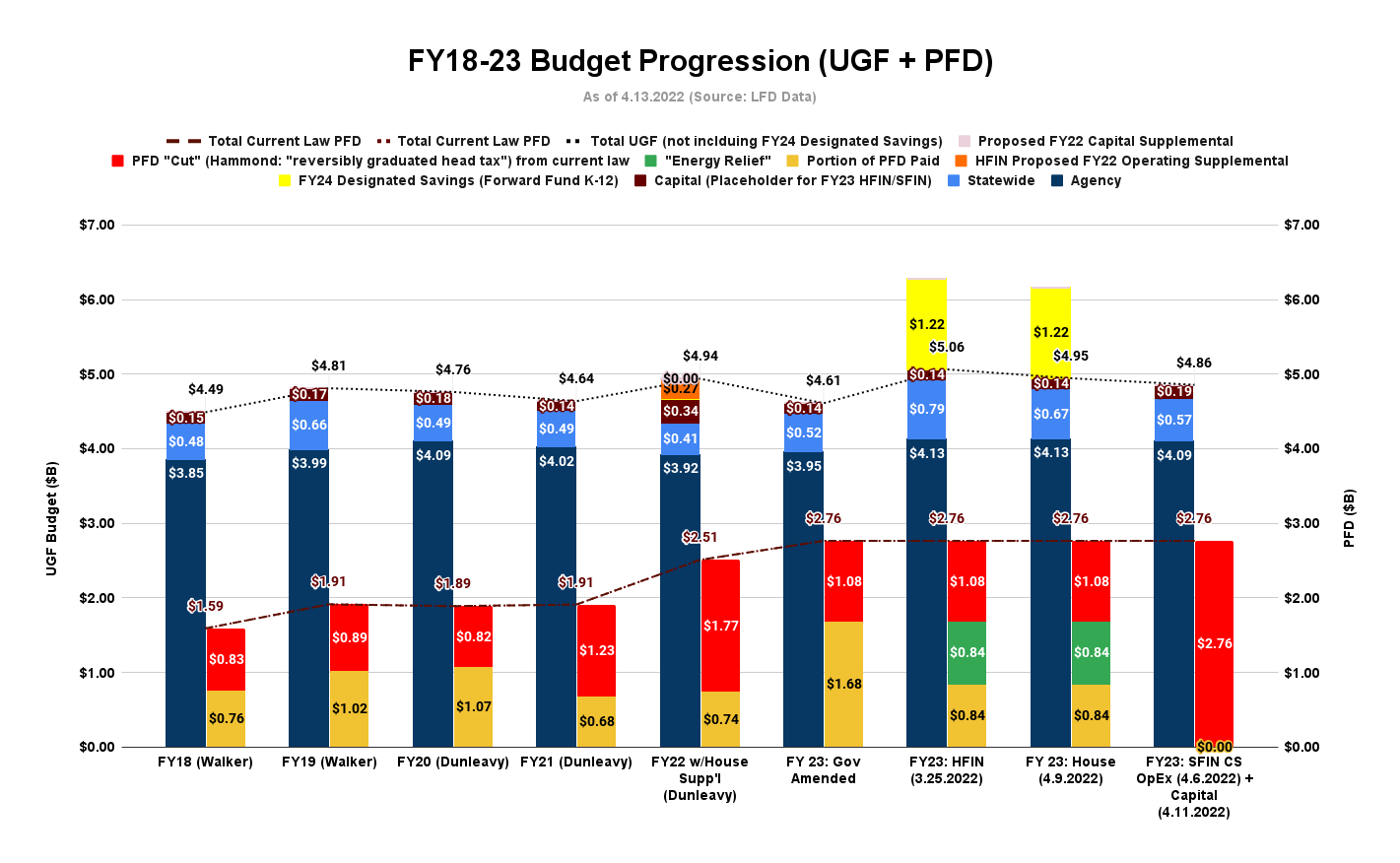 Of course there are a lot of steps remaining before both the FY23 and FY22 supplemental budgets are finalized and history has shown that they can change dramatically over those additional steps.

While some do, we don’t count in the FY23 spending levels the $1.22 billion in K-12 “forward funding” included by the House in its proposed operating budget. The reason we don’t is because, in our view, that appropriation is related to the FY24 budget. While the appropriation does reduce the amount of revenue spendable in FY23 on other items, it is not being appropriated for spending in FY23.

Instead, it’s essentially being set aside in a designated savings account to be drawn in FY24 to support spending then. Because none of the other previous five years includes a similar amount related to a future fiscal year, in our view including the $1.22 billion in the FY23 budget would distort their comparability.

While there aren’t dramatic changes on the spending side, there certainly are on the revenue side.

Over the same 5 year period referenced above, UGF revenues, before counting savings or the diversion of a portion of the current law PFD to the general fund, averaged $3.1 billion. Adding the additional revenues projected by the Spring Revenue Forecast, revenues for FY22 are now projected to reach $4.4 billion and, for FY23, $5.57 billion, 42% and 80%, respectively, over the previous 5 year average.

Those increases change the issues surrounding the budget and the PFD dramatically.

The same as the chart above, the chart below shows traditional UGF spending over the last 5 years plus the steps thus far taken in the FY23 budget process on the left, but substitutes the sources of funds used to pay for that spending on the right. 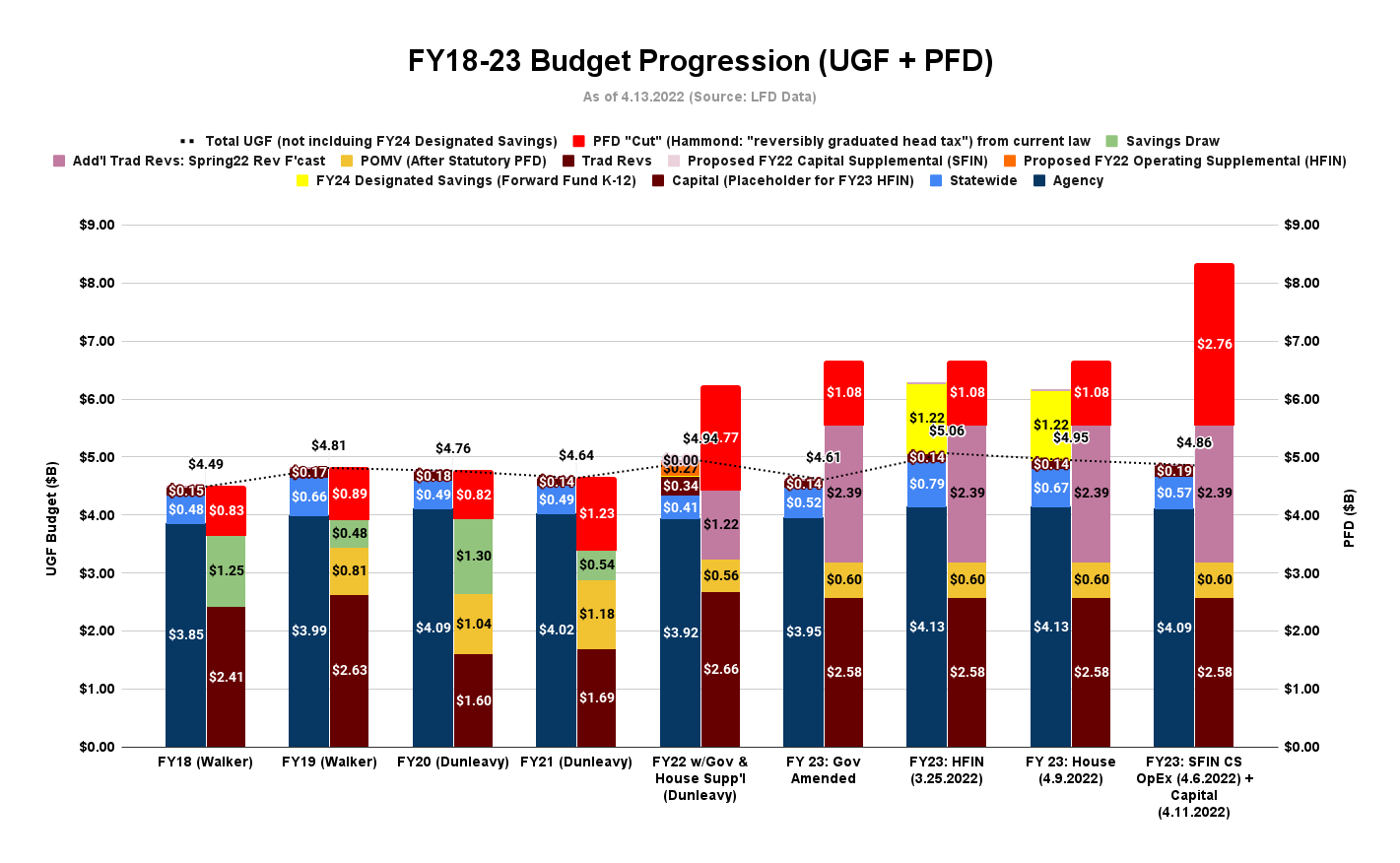 Because traditional revenues, plus the portion of the POMV draw available to government after deducting the current law (statutory) PFD, were not sufficient to fully cover spending, during the previous 5 years the budget was supplemented significantly by savings draws and PFD diversions in order to balance. Over the 5 year period the average savings draw was $700 million and the average PFD diversion was $1.1 billion per year.

In the view of most, the PFD during those years was based largely on what was “leftover” after the POMV draw was used to balance the current year budget. In essence, each year then-current Alaska families were asked to backstop then-current year spending by accepting PFD cuts.

But now, largely as a result of higher oil prices, the FY22 and FY23 budgets are running a surplus.

With the additions proposed in the supplemental budgets, FY22 spending totals $4.94 billion. Including the adjustments to traditional revenues projected in the Spring Revenue Forecast, FY22 revenues are estimated to be $4.4 billion. While the FY22 budget currently reflects $1.77 billion in PFD cuts, all that is required to balance the budget is $500 million. The remaining $1.27 billion in PFD cuts from statutory levels is surplus to that.

As noted above, projected FY23 spending currently appears to be somewhere in the range of $4.9 to $5.0 billion. Even before PFD cuts, FY23 revenues currently are projected at $5.57 billion, more than enough to pay for FY23 spending with another $500 – $600 million left over.

But even with those surpluses, the Legislature and governor nevertheless are continuing to propose PFD cuts.

Why? The House proposes to use the cuts to help cover “forward funding” of FY24 K-12 spending. Counting the surplus before PFD cuts, funding that FY24 commitment requires at least $600 – $700 million in PFD cuts.

Under the governor’s proposal, the incremental PFD cuts beyond what are required to balance the current year budget just goes to savings.

In short, differently from those made during the previous 5 year period, the FY22 and FY23 PFD cuts aren’t being made in order to backstop the current year budget. Instead, PFD cuts are now being made to cover future year spending, or in the case of the governor’s proposals, simply to create savings.

To us, making the PFD subordinate to future spending or savings is yet another significant change in the ongoing saga of the legislative treatment of the PFD.

Imposing costs on current Alaskan families to fund future spending or build savings might be appropriate if all Alaska families were being asked to have the same skin in such efforts. But they aren’t.

Instead, by using PFD cuts, it’s largely current middle and lower income Alaska families that are being asked to make the financial sacrifices to fund such future endeavors

Below is the distributional impact – the “who pays” analysis – of using FY23 PFD cuts either to fund future K-12 spending or, in the governor’s case, to increase savings. Under the proposed budgets as they currently stand, both approaches contemplate FY23 PFD cuts of about $1.08 billion from current law (statutory) levels. For comparison, we also include what the distribution would be if the same amount were raised using a more equitable, flat tax approach. 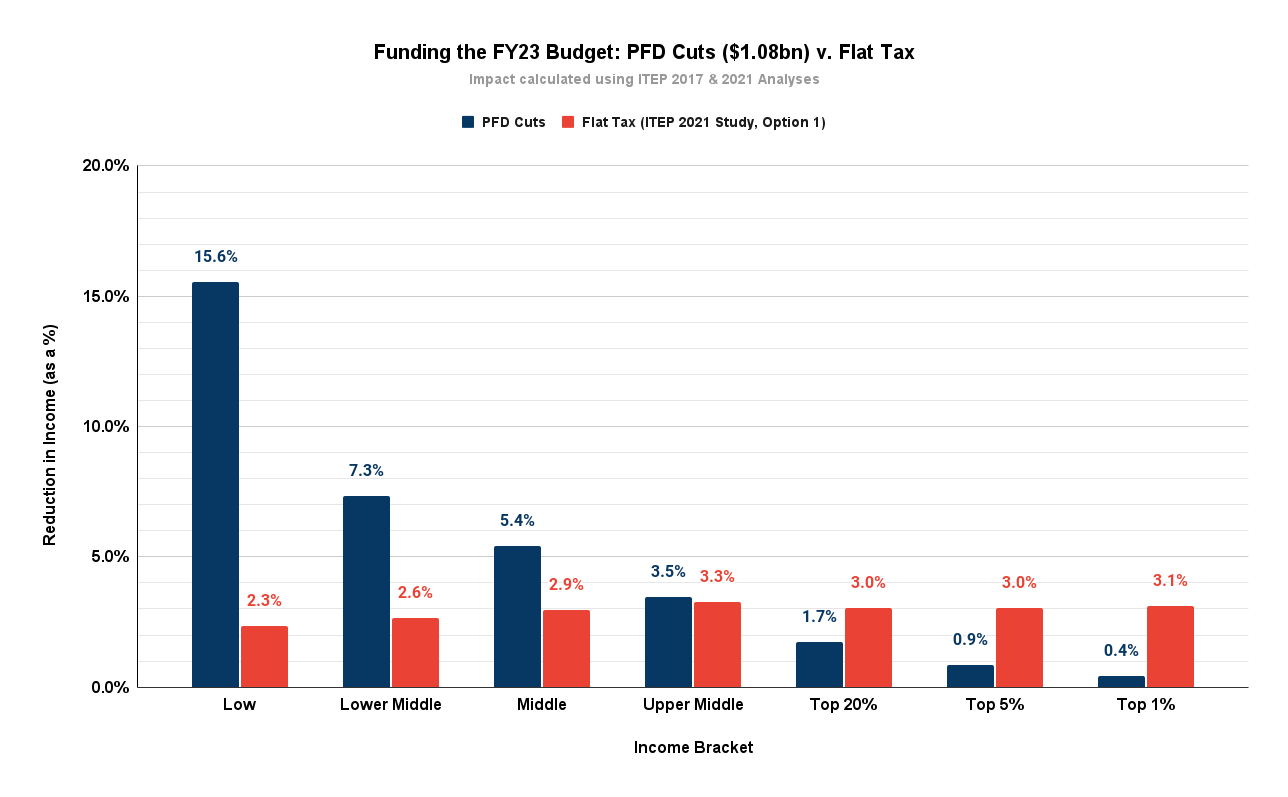 To us, it was one thing to ask current Alaska families to backstop current year UGF spending when the state was running deficits. At least they were being asked only to contribute toward current government services.

It is a significant step beyond now to ask current middle and lower income Alaskan families disproportionately also to fund future UGF spending. No longer are they carrying a disproportionate load only for the current costs of government, now they are being asked to contribute a disproportionate share toward future spending as well.

To us, that’s taking the inequity of PFD cuts another step beyond.

change the subject, only way i use to get in, but, follow the money. kelly giving a lot of money to pruitt, for what i don’t know, cause see no campaign of consequence ocurring. also, per those fec reports, alot of loot going to dave stierans company for the same thing. where’s the campaign for that kind of money. personally, i suspect that utimately there’s alot of kick back occurring or going to occur, kelly’s gonna pocket alot of that money personally. dig into it,Jeff