Brad Keithley’s chart of the week: Oil revenues aren’t only about oil prices

Whenever we write a column or post about “traditional” (which are mostly oil) revenues, some will always comment, “but what about production levels?”

They are right to ask, of course. Oil revenues aren’t only about oil prices. Gross oil revenues are the result of oil price times production. And production levels sometimes can make a huge difference.

As we have written previously, there has been a huge change in circumstances since that time, however, to the point that the Preliminary Fall Forecast now projects FY22 traditional revenues at $2.91 billion, fully 75% above the level included in the Spring Forecast.

Most attribute that to the change in oil prices used between the two forecasts. While the Spring Forecast was based on $61/bbl, the Preliminary Fall Forecast is based on $81/bbl, about a third higher. But, in actuality, that difference only accounts for a little over half (56%) of the projected increase in FY22 traditional revenues.

Based on DOR’s Spring “Price Sensitivity Analysis,” if the production levels had remained constant between the two forecasts, the jump in price would have resulted only in about a $700 million increase in FY22 traditional revenues (from $1.66 billion to $2.38 billion). Most of the remaining $500-plus million revenue increase is attributable to the roughly 6% growth in annual projected production levels from 460 mbd in the Spring Forecast, to 488 mbd in the Preliminary Fall Forecast.

To be honest, that projected volume increase seems to us like a lot, especially in light of experience to date. As part of our daily chart series (published on our Facebook and Twitter pages), each Thursday we regularly chart year-to-date (YTD) production levels against those projected in the most recent revenue forecast. As of yesterday, a bit more than a third of the way through FY22, the average YTD production level is only a bit over 455 mbd, not even yet at the level projected in the Spring Forecast and 30 mbd (~6%) below that extrapolated from the Preliminary Fall Forecast 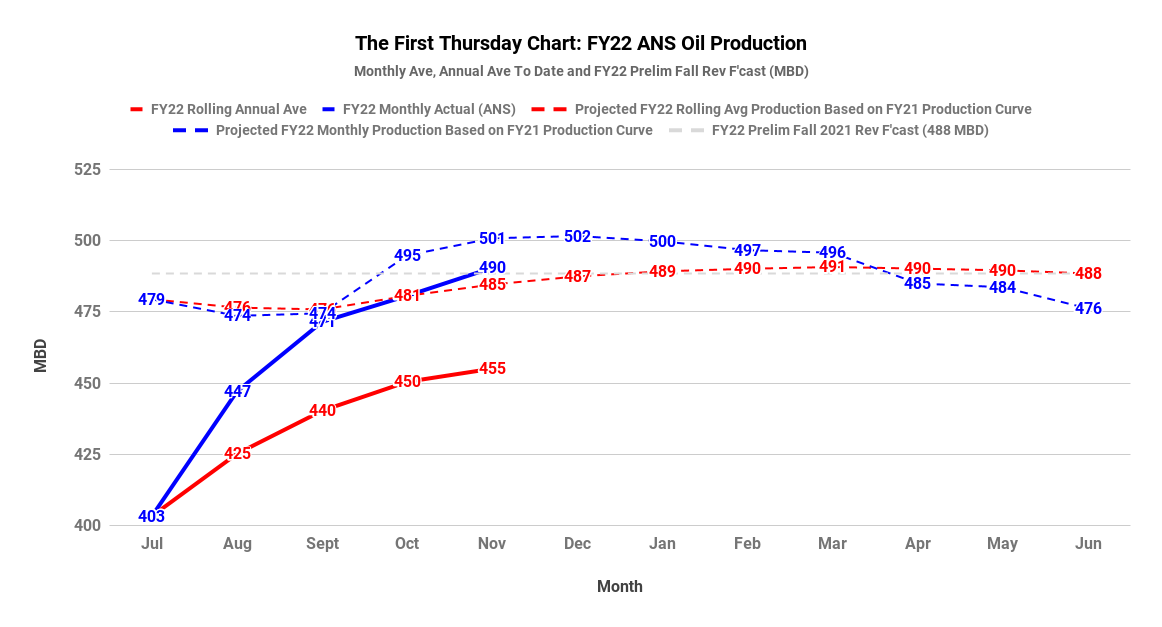 Now, true, because of temperature differences the North Slope oil fields regularly run at higher production rates during the winter than in the summer and shoulder months, so the current YTD average should be expected to increase some.

But as our second Thursday chart shows, production would need to average 509 mbd throughout the entirety of the remaining 7 ½ months of the year to hit the level projected in the Preliminary Fall Forecast. That’s a nearly 12% jump above the current YTD production level – and that’s if it began tomorrow. The target number will be higher if the anticipated jump in production comes later in the fiscal year. 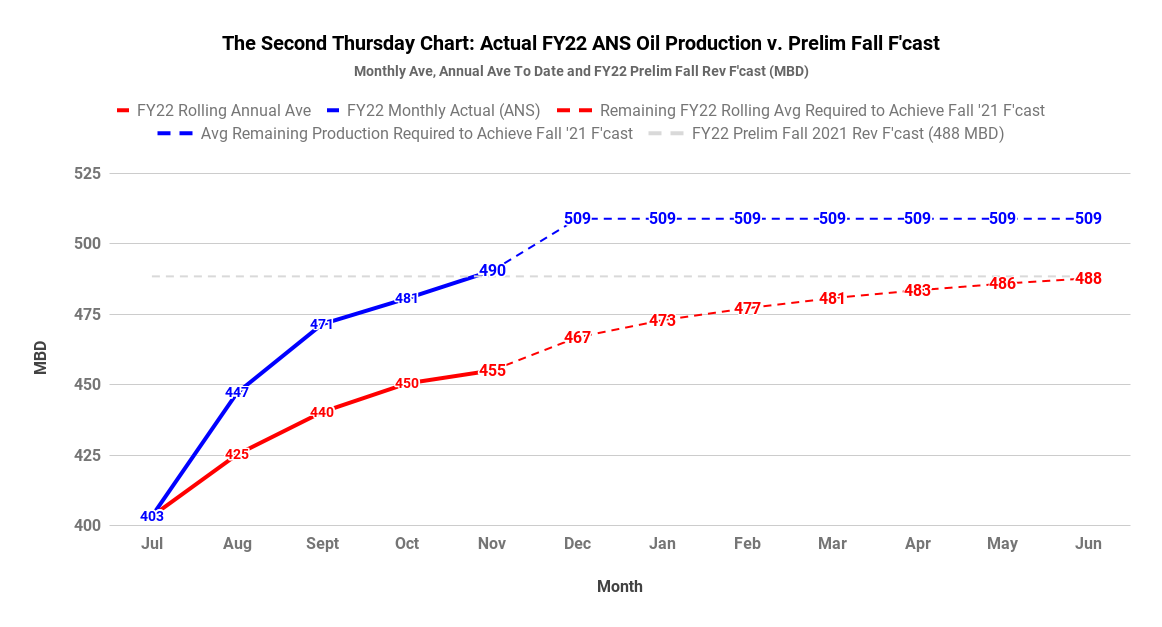 All we can be at this point is skeptical, however. Unlike price projections, which can be objectively tested using the current futures market, the volume projections included in any given revenue forecast are relatively opaque. They are based on non-public discussions (and, presumably, data exchanges) between the producers and the state. All that we know at this point is that the Department of Natural Resources, which provides the production forecasts to DOR, anticipates production levels will increase (materially) over the remainder of FY22 “due to the resumption of drilling and favorable oil prices.”

Following the discussion on that issue in the coming weeks will prove the importance of paying attention as much to production forecasts as price forecasts. As readers are aware, Governor Mike Dunleavy recently has been touting the projected $1.25 billion increase in traditional revenues between the Spring and Preliminary Fall Forecasts as justifying a supplemental appropriation sufficient to achieve his goal of a $2,350 PFD (based on POMV 50/50).

With more than 40% of that increase tied to a substantial – and as yet unrealized – boost in FY22 production levels, we anticipate the production forecast will receive a lot of attention both when the final Fall Forecast is published later this month or early next in connection with the Governor’s proposed FY23 budget and later, once the Legislature’s 2022 regular session starts.

Those discussions certainly will prove the relevance of routinely asking, “but what about production levels,” whenever the issue of oil revenues is raised.

It all makes cents now