Brad Keithley’s chart of the week: A realistic look at the 10-year outlook

Last Friday the Department of Revenue (DOR) released a “PRELIMINARY Fall 2021 Revenue Forecast.” While unusual, publishing an additional, “preliminary” report is not without precedent where there have been significant changes in market conditions between the regularly published Spring and Fall publications.

The new, “Preliminary” forecast projects higher near term production levels of 488.4 (FY22) and 500.2 (FY23) mbd, but beginning in FY24, lower production levels than were reflected in the Spring Forecast for the remainder of the period.

Our primary issue with the “Preliminary” forecast – and the one we chart here – is with the long term price deck. The forecast uses prices which reflect the current futures market for the first two years (FY22 and FY23), but then abandons that approach and starts using prices escalated from the previous year’s by inflation for the remainder of the period.

On the other hand, the current futures market – where oil producers, consumers and traders invest real money based on their expectations – continues in what traders call “backwardation,” where prices decline over time, throughout the entire period.

Here is the difference based on yesterday’s (Thursday’s) prices at market close. While the differences for FY22 & FY23 are relatively minor (within 5%), by FY30 the difference is huge, with the “Preliminary” forecast projecting a price level nearly 40% higher than the current futures market. 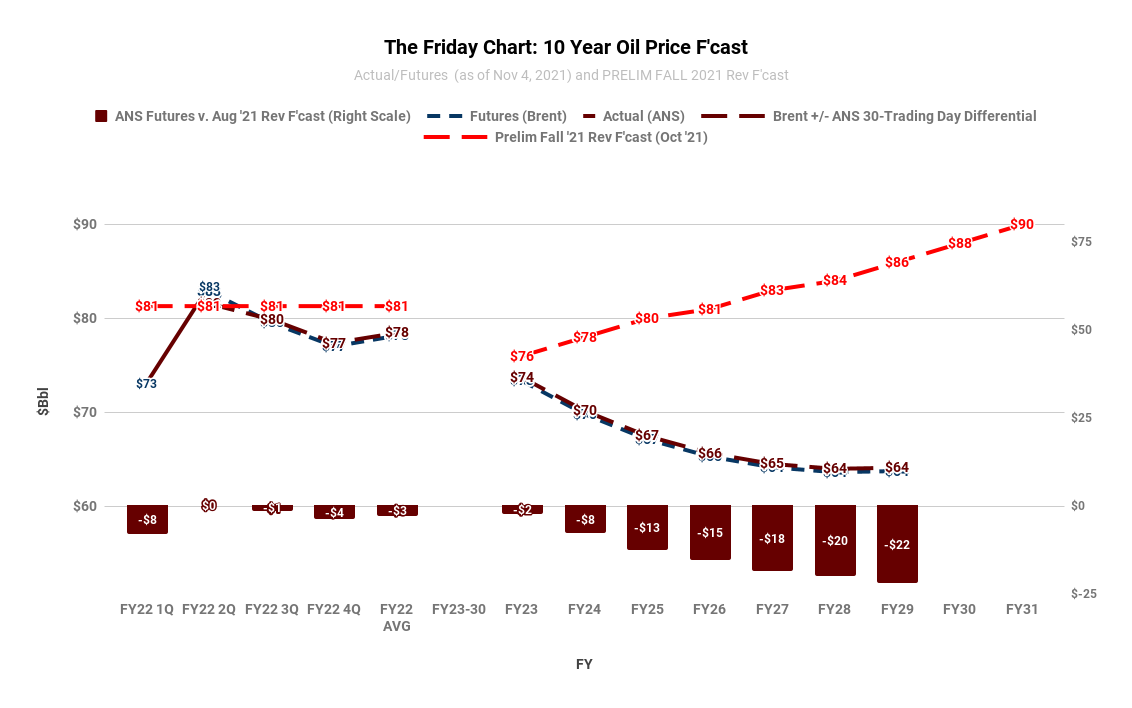 While we largely agree with DOR’s assessment of Alaska’s near term fiscal outlook (traditional revenues up significantly), we believe using a higher, inflation driven price deck creates a dangerously false sense of Alaska’s fiscal situation over the intermediate and longer term.

While the impact of the higher, out year prices are somewhat offset by the lower, out year production levels, the combination of the two still projects a substantial increase in traditional revenue levels over those reflected in the Spring Forecast. For example, the Spring Forecast projected traditional revenues of $2.7 billion for FY30. Using the substantially higher price deck, the Preliminary forecast revises that to $3.9 billion, a nearly 45% increase.

And both of those exceed what’s supported by the current futures market.

We believe a much more realistic (and fiscally conservative) approach is to continue to use the futures market price throughout the remainder of the forecast period. Using those (and the production levels from the Preliminary forecast), our current forecast for FY30 revenues is $2.2 billion, not only more than 40% below the Preliminary forecast, but also, largely because of the differences in oil prices, nearly 15% below even the Spring Forecast.

Because we believe the “Preliminary” forecast’s near term price and revenue levels are largely supported by the current futures market, we agree with the Administration that Alaska has some breathing room over the next two years compared to the difficult situation previously projected in the Spring Forecast.

But after that, not only does the situation turn worse than the overly rosy picture reflected in the “Preliminary” forecast, it turns gradually worse even than that previously projected in the Spring Forecast.

In essence, the current – what the futures market currently views as a transitory – increase in oil price is providing the Administration and legislature with what the Governor earlier proposed to create with his “bridge” draw from the earnings reserve account – a relatively calm period within which significantly to reframe Alaska’s fiscal structure to survive a much more difficult road ahead.

In the next session, the Governor and Legislature should proceed full speed ahead on that effort with the same urgency as if it had gone ahead with the bridge draw. What the current futures market is telling us is if the Governor and Legislature don’t, not only are we going to face the same problems as we have the last few years, they are going to become even worse than the Spring Forecast projected.

I am not sure how much attention these chart of the week columns attract, but I am very grateful for them.

I am curious whether the “backwardation” of the futures market is plausable as a preductive tool or if there is something inherent to futures markets that exert a downwards pressure on futures prices.

In other words, is this simply an illustration of the time value of money or is it really a crowdsourced prediction of the most likely scenario?

Dan … The usual state of the oil market is what traders call “contago,” where futures exceed current prices. As OPEC regained control of the market during COVID, the market flattened out, then slipped into backwardation late last year, indicating that the current market has tightened significantly, driving up the current price, but with some expectation it will soften over time. There are a number of factors driving that expectation. There are concerns about demand destruction at higher price levels, the potential effects of climate related measures and an expectation that supply stocks will rebuild at some point due to… Read more »

Thank you for your insight.

What am I doing wrong? Because of the font and graphic size these charts cannot be read on my laptop.

On most laptops you can increase the size of the page either by spreading it with two fingers or, in the browser, by “zoom”-ing (what its called in a chrome browser) the page.

And the rich get the money us surfs get the shaft.