A raucous series of Anchorage Assembly meetings from late September to early October saw the Assembly and office of Mayor Dave Bronson battling both over a controversial proposed mask mandate and for control of the Assembly chambers. The meetings earned national press coverage and intense local attention largely due to the behavior of attendees and the acrimonious relationship on display between the Assembly and Mayor’s office. Now, the Landmine has obtained documentation stating that at the height of the particularly chaotic October 7, 2021 meeting, Municipal Manager Amy Demboski ordered the Anchorage Fire Department (AFD) employee who operates the audio/visual equipment to cut the widely-viewed public live stream of the event.

During the October 7, 2021 meeting, Assembly Chair Suzanne LaFrance ruled that members of the Assembly and the Bronson administration could no longer ask follow-up questions to members of the public giving testimony. In previous days, Assembly member Jamie Allard (and, to a lesser extent, members of the Bronson administration) had frequently asked those giving testimony strings of minimally relevant questions. One of Allard’s aides stated on Facebook that she and other mandate opponents were attempting to stretch out public testimony in order to filibuster the vote.

An e-mail obtained by the Landmine shines light on Demboski’s unexplained trip to the audio/visual room. According to the e-mail, sent by AFD employee John Crabb, who has long managed audio/visual operations at Assembly meetings, to AFD Chief Doug Schrage and several others, Demboski demanded that Crabb cut the public audio/visual feed to the Municipal channel on GCI and the Assembly’s YouTube channel. According to the e-mail, Crabb refused Demboski’s order, stating that he reports to AFD Assistant Chief Alex Boyd.

Sources tell the Landmine that AFD Chief Doug Schrage instructed Boyd to tell Crabb to disregard Demboski’s demand and continue the audio/visual feed. Sources further claim that when Schrage contacted Boyd, Crabb was in the process of creating a graphic stating that the feed had been “cut at the direction of Municipal Manager Amy Demboski.” 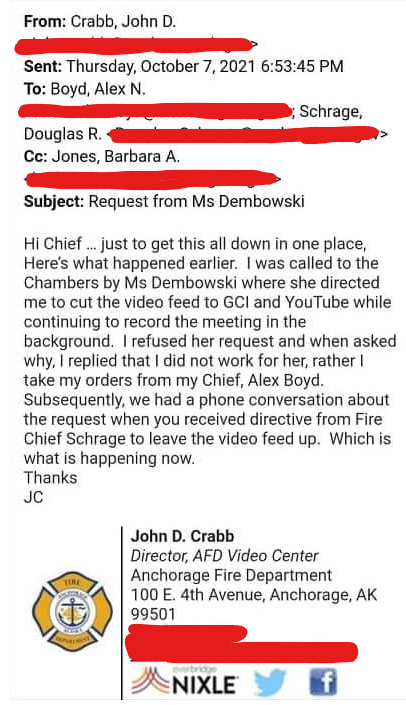 When asked for comment about the incident, Demboski responded by text, “The video feed was never turned off.” She did not respond to a follow up question about the email sent from Crabb.

The October 7 meeting culminated with additional acts by members of the Bronson administration intended to assert its authority over the Assembly chambers. Adam Trombley, the director of the Office of Economic & Community Development, abruptly removed a plexiglass shield in front of the speaker’s podium meant to serve as a COVID-19 mitigation measure. Then, Demboski ordered security to leave the room. Anchorage Police Department (APD) officers also departed, but remained in the library entrance area. Without any mechanism for maintaining order in the chambers, members of the audience openly shouted at, heckled and screamed profanity at members of the Assembly. One individual yelled at Assembly members that they would be hung. A variety of disruptions continued for the duration of the meeting.

Assembly Chair Suzanne LaFrance provided the following statement to the Landmine regarding the incident:

Given that the administration also dismissed security from the chambers and removed the plexiglass shield at the same meeting, I can’t think of one charitable reason why the municipal manager attempted to stop the public broadcast of an Assembly meeting. The video feed helps inform people about the Municipality’s business being conducted. It promotes openness and transparency. I would like to hear the municipal manager explain why she interfered with the people’s business by trying to shut down the video feed. There needs to be accountability for these actions. We must protect transparency and openness and ensure that this doesn’t happen again.

8
Reply
Amy what the hell happened?

I voted for Demboski when she ran against Berkowitz. Never again. She and the rest of the Bronson/Allard crowd assembled an angry, out-of-control COVID-positive mob and then Demboski tried to cut the live video stream so that the public could not see the thuggery in action. There is no other reason or excuse for this. I hope when the smoke has cleared, folks like Demboski and Trombley feel some shame about getting wrapped up in the disgusting and inept theatrics of the Bronson administration.

19
Reply
lol
Reply to  Amy what the hell happened?

lol Amy is not getting wrapped up in the Bronson admin or whatever, this is just the real Amy when she finally has power. Thank god she lost that mayoral election. At least it gave Anchorage a few years of relative sanity before Bronson.

Scary. But is it grounds for her removal as a muni employee? What rules has she broken so far?

5
Reply
Will
Reply to  Dumb question

Let’s start with the First Amendment.

Pretty narrow and one-sided, as if to suggest yet another attempt to control the narrative. Two things come to mind. First, given the wide-ranging discussions in recent months about separation of powers, why is the Anchorage Fire Department in charge of this feed? Excepting John Crabb’s individual expertise, what special expertise does the department possess versus any other arm of municipal government? Second, as the Assembly has steadily increased its staff while at the same time meetings run less smoothly than they used to, I wouldn’t expect an Assembly employee to do a better job. Still, we’ve seen numerous cases… Read more »

Question: If the Assembly is subject to the State Open Meeting Law, regardless of who “cuts the feed” during a public meeting for any reason not specifically exempted from the statute (e.g. personnel matter) why is the Administration or the Assembly allowed to interrupt the proceedings? Was the audience removed? This same B.S. of cutting the audio feed is routinely exploited by the Legislature who exempted themselves from that open meeting law. Only those with the wherewithal to be physically present are allowed to hear what is going on. Demboski was wrong in any event.

There’s a bit of history to your question about why AFD is in charge of the video feed. Once upon a time the job was placed out to bid, and KTUU/Syntax provided the feed to GCI. That was before the internet. KTUU lost the job when someone fed some pornographic material on the backfeed to the library and the wrong person saw it. Ooops. AFD personnel are required to engage in ongoing training in order to maintain their credentials, considering the size of this job AFD has a training specialist who coordinates this task from the AFD Video Training Center… Read more »

If the goal is to prevent political games, it sounds like the plan is working.

I hope when the smoke has cleared, folks like Zaletel, Dunbar, Verdia, Davidson, Constant, Peterson, Rivera, Kennedy and LaFrance feel some shame about getting wrapped up in the disgusting and inept theatrics of the Anchorage Assembly. NOT! The assembly politcal games will continue. Enjoy the show! https://mustreadalaska.com/assembly-meeting-turns-into-farce-as-transgender-stages-street-theater-protest/ (JUNE 24, 2020)

Two side of the story. We are only getting this one. The track record of the assembly doesn’t give much substance to this story. The assembly has been on the mission of control over the people for to long. The media can’t be trusted to tell both sides of the story without trying to bend the facts.

What is the other side of the story? What facts were bent or omitted?

“The video feed was never turned off.”
Cute, say something that irrefutable. Don’t answer the question.