The most updated Anchorage election vote count puts Proposition 13, the alcohol tax, up 51.24 to 48.76. Unlike last year, where the vote failed 46.24 to 53.76, the pro alcohol tax side ran a real campaign this year and was well funded. However, the Assembly should not certify the vote due to shenanigans that occured.

Recover Alaska also ran Facebook and radio ads supporting the alcohol tax. Alaska law requires groups supporting or opposing candidates or ballot propositions to register with APOC and file reports that disclose their income and expenditures. Recover Alaska did not do this in 2020.

Between January and April 2020, Recover Alaska spent thousands of dollars running ads on Facebook. Facebook only gives a range on each ad. According to Facebook, the group has spent $8,285 on ads between May 2018 and April 2020. Some of this was for ads supporting last year’s alcohol tax and some was for unrelated ads.

Here are all the ads they ran on Facebook and Instagram between January and April supporting the alcohol tax. 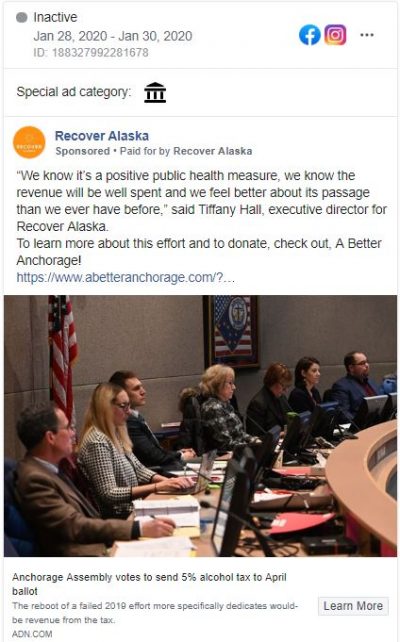 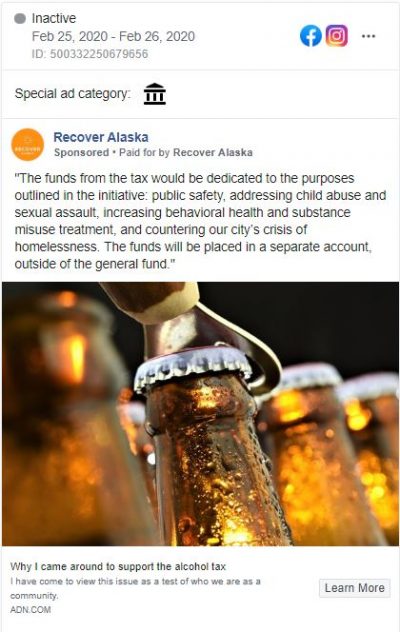 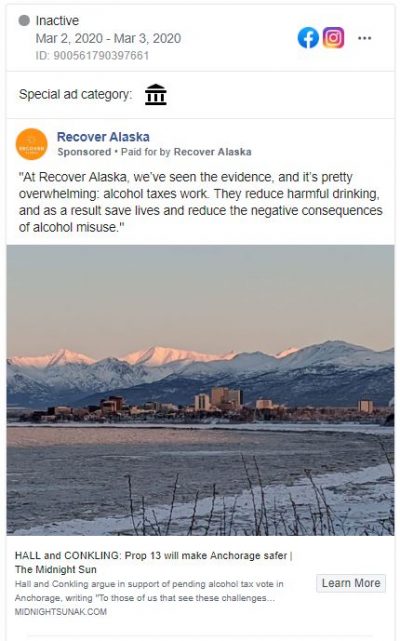 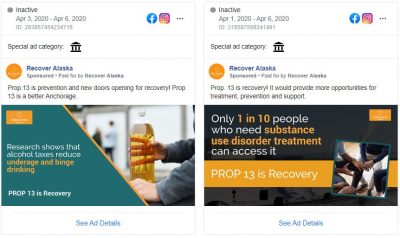 Recover Alaska also ran radio ads supporting the alcohol tax. They filed FCC disclosure forms for radio ads that were run on KENI. The FCC requires these forms for political ads. The forms do not show how much money they spent, just that they ran ads on KENI from March 16 to April 6. The forms can be seen here and here.

Campaign laws exist for a reason. Unfortunately they are frequently broken or ignored. APOC rarely issues significant fines to candidates or groups who break the law. When they do the fines are usually not much. The Anchorage Assembly should send a message and not certify this vote. They should demand more information from Recover Alaska about who funded their campaign and how much money they spent.

How much did CHARR pay you for this post?

Right ? Hard to pity CHARR, they’ve been working against the better interests of our community for a long, long time now. I can’t think of another advocacy group in Anchorage that is so dedicated to their cause, that they fail to see the impact that their industry does to our community. CHARR is a morally bankrupt organization that I truly hope goes out of business.

Violation of state laws is APOC’s job. The Assembly’s job is to certify the results of the election. The two are not related.

Alcohol, like marijuana, is a legal, but non-essential, recreational drug. Alcohol is classed as a depressant, meaning that it slows down vital functions—resulting in impaired judgement, slurred speech, disturbed perceptions, unsteady movement and an inability to react quickly. Because alcohol use is legal and pervasive, it plays a particularly strong role in the relationship to crime and other social problems that the Municipality of Anchorage pays to deal with (e.g. DUIs, homicides, rapes, domestic violence, assaults and Fetal Alcohol Syndrome). By not recovering the costs that alcohol abuse causes the Municipality is, in fact, subsidizing the cost of alcohol, a… Read more »

Wah ? Sorry that you’re butt-hurt about being left out of the Press Club, but this is why. You’re a pseudo-journalist with an agenda a huge ego, both of which get in the way of any objective reporting.

Yeah, this post reminds me of the underpants gnomes in South Park. You’re missing the part of how you get from the underpants (alleged violations) to the profits (refusing to certify the election).