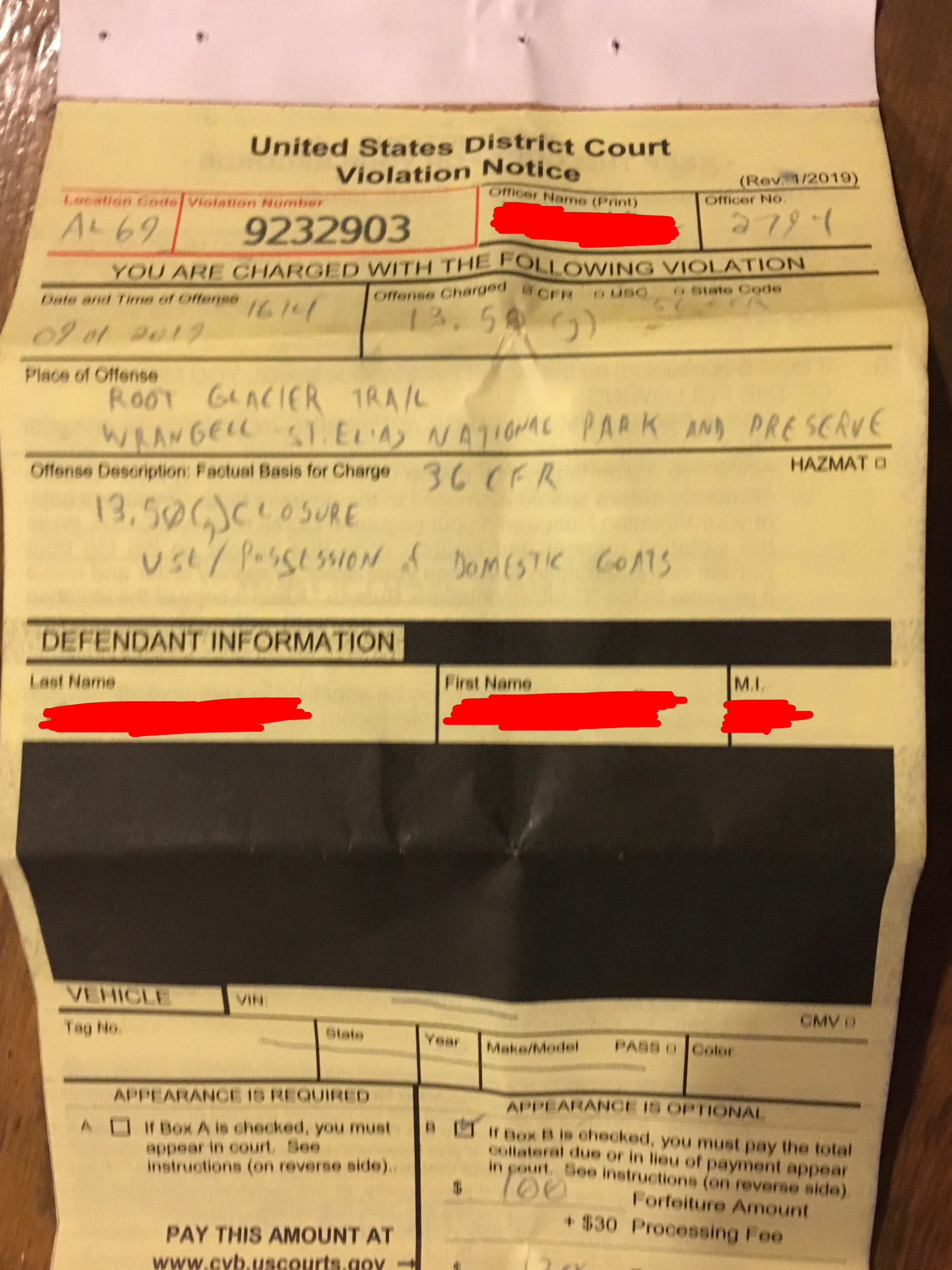 A group of women had brought two goats onto the glacier when they were confronted by a park ranger, who found them in violation of CFR 36 13.50 (g), a general and broad clause designed to protect the integrity of national parks. The fine was issued to the owner of the goats.

We reached out to the National Park Service for comment, but as of this writing we have not heard back. According to a source at Alaska Fish and Game, domesticated goats have a complicated history of spreading a disease to wild herds. The spread of the bacterium mycoplasma ovipneumoniae (M. ovi), which causes respiratory disease, has been a particular concern. Click here to read more on Fish and Game’s website about M. ovi. In 2018, the government of the Yukon Territory in Canada issued strict rules designed to separate domestic and wild populations of sheep and goats.

This story was brought to our attention by Landmine readers who were at the glacier at the time of the incident. We were not able to contact the woman who was fined. Check back for updates to the story.

The history of domestic goats spreading pathogens to wild herds isn’t complicated…..it is nonexisistent. There isn’t one documented instance.

Facts to back up this assertion?

This is pure bunk! No reported history of spread of m. Ovi between domestic goats and wild sheep. It is propaganda from the Western Sheep Foundation hunting club. Still, the federal law is there and they should have known.

Ummmm, the only animals in Alaska to have tested positive for M. Ovi, are wild sheep, sooooo there’s that.

I was wrong about this, they have tested some domestic sheep and goats since the last articles I read.

None found positive from what I have seen. Regardless m. Ovi is a transient bacteria and they have not shown any issues with Alaskan wild sheep being susceptible to it.

According to ADF&G it has been found in Dall Sheep and Caribou from the 40 Mile and Nelchina herds. Soooooo, there’s also that.

4
Reply
Pamela
Reply to  Brian A.

Also moose. They think it could’ve gotten to wild animals in the gold mining days and worked its way through the ecosystem. Now there are carriers. The only documented death of an animal contributed to M.ovi is a caribou calf that got a strain of pneumonia.

So according to the “scientists” on here we should just wait for an outbreak to occur before enforcing the law rather than prevention?

Outbreak from what? Wild sheep and caribou intermixing and already carrying a bacteria with. O apparent susceptibility thereto? Gosh, let’s build them padded mountain tops and safety nets too. Falls kill a lot of them.

You know what kills a lot of our wild sheep? Patrons of the Wild Sheep Foundation. That’s right: hunters.

So why, really, does someone ‘hike’ with their goats on federal lands? It’s likely that they are trying to make a statement or create a conflict… Then quickly bring it to the press… I suspect there will be more arm waving and whining about how this person is being denied their constitutional right to bring a goat anywhere they please! MAGA!

Pack animals T. I saw some years ago at Eklutna Lake.

Reporting so hard hitting it required two of you….

Why do you feel a need to publish this non-story ? They broke the rules, they got fined, as they should have. Why don’t you do a write up about what Rick Rydell does to earn his hefty paycheck ?