An internal Alaska Industrial Development Export Authority (AIDEA) document obtained by the Alaska Landmine shows that Governor Mike Dunleavy (R – Alaska) requested the $441,000 sole source contract to Clark Penney last year. Penney earns $8,000 per month, plus travel reimbursement, under the contract. The Landmine broke the story about the existence of the contract in May of 2019. The contract raised eyebrows because Clark Penney’s grandfather, Bob Penney, had donated over $350,000 to the independent expenditure group Dunleavy for Alaska.

The waiver in the May 2019 story, which was obtained by a records request, was signed by AIDEA procurement officer Michelle Hope on March 18, 2019. CEO Tom Boutin signed it on March 19, 2019. The metadata in the internal AIDEA document from the contract file shows it was created on a State of Alaska computer on March 15, 2019, four days before Boutin signed the waiver request and three days before Hope signed it.

DCCED is short for the Department of Commerce, Community and Economic Development. The metadata shows Shawn Williams created the document. At the time Williams was an assistant commissioner at DCCED. Williams was featured in the original story because he was involved with the Alaska Development Team. Penney’s contract is for work with the Development Team. According to the metadata the document was modified by Michael Catsi, who also worked for AIDEA at the time. He has since left. 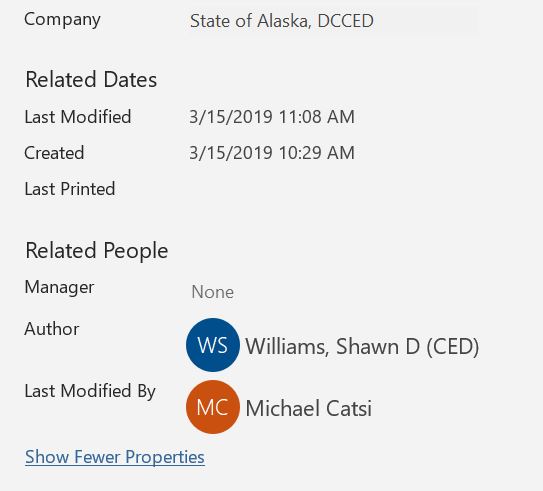 The Landmine obtained a total of seven internal documents from the contract file. The metadata on one of the other documents shows that Clark Penney created a document outlining part of the scope of the contract on March 13, 2019. That metadata shows that document was modified by Shawn Williams.

I requested a comment for this story from both AIDEA and the Governor’s Office. Neither have responded. I also sent the following email to Jeff Turner, Dunleavy’s press person, on February 5:

Did Governor Dunleavy or anyone in the Governor’s Office tell or suggest to AIDEA to give Clark Penney that contract?

I never received a response.

During a House Finance Subcommittee hearing on February 4, AIDEA CEO Tom Boutin said no one from the Governor’s Office told him to give Penney the contract and added, “The buck stops with me.”

The Landmine’s source said that before Penney was awarded the sole source contract “a man from the Governor’s Office had called several times instructing [AIDEA] to give Penney the contract.” The source said that after the story was reported in May, AIDEA executives discussed moving Penney’s contract to the Office of the Governor or cancelling the contract, putting it out for bid, and then awarding it to Penney. Neither option was chosen because they felt the news cycle would move on.

The story will be updated if AIDEA and/or the Governor’s Office provides a comment.

A charter member of the Corrupt Bastards Club is now our Lt. Governor, and Ben Stevens is the Chief of Staff to Doneleavy. The more things change, the more they stay the same.

Time for the FBI to come back again and root out the CBC players, starting with our governor!

Maybe it’s time to get the DOJ involved.

Wonderful idea; however, do you think that will happen under William Barr? Remember Dunleavy has met with Trump on Air Force One in Anchorage. To William Barr that equates to “sainthood”status for Dunleavy.

I supported this governor, bad decision, and if this was a condition of Penny’s support . . . come on, Mike. Good grief. Ethics seems to be a problem in Alaska politics. Expect this to become an issue come reelection. Bad move. Very bad move. Remember Parnell’s appointment of Dahlstrom and Therrialt back in 2010?

It won’t be an issue for re-election, it will be an issue for the recall vote before then. The Dunleavey group is swiftly running out of procedural roadblocks to that vote.

Ethics is a problem in REPUBLICAN Alaska politics.

thank you for your work on this topic, good job. what is this all about?
https://www.ktuu.com/content/news/State-of-Alaska-shelves-50K-oil-tax-report-saying-it-needs-substantial-additional-work-567884071.html
Dunleavy needs to resign he will never have the confidence of the majority of Alaskans.

Leo,
Thank you for that information. What did King report to the Administration? Was it a poor quality product or are they simply “killing the messenger”? Dunleavy , like Trump, certainly provides a “target rich environment” for investigative reporting.

I’m surprised this article did not include a mention of Mary Ann Pruitt. Mary Ann worked for a Dunleavy election group and after the election was paid $15,400 a month by the Dunleavy administration for utterly inept “communications” work. Rewarding campaign supporters with shamelessly huge, inappropriate contracts is the norm for this administration. Meanwhile, Dunleavy is telling everyday Alaskans that we’re broke and we need to cut essential services across the board.

Thanks Jeff for not “moving on” from this story.

Has anyone checked to see if the degree to which Dunleavy’s detractors are upset (aka trigger ratio) is such that this kind of malfeasance is warranted?

That would be up to you and the rest of us to get on the supporters FB accounts and ask them. I follow a few in Mat Su and I see nothing except save the PFD.