Three weeks ago the Landmine broke a story about a sole source contract for economic development from the Alaska Industrial Development and Export Authority to Clark Penney. The initial contract is for $44,000, which expires on 9/30/2019. The sole source waiver request authorizes a total of $441,000 over 40 months. Here is a link to the article with all the information and documents for the contract.

You may remember Bob Penney, grandfather of Clark Penney, as a major donor to the independent expenditure group, Dunleavy for Alaska. He contributed over $350,000 to the group to help get Mike Dunleavy elected governor.

Representatives Zack Fields (D – Anchorage) and Jonathan Kreiss-Tomkins (D – Sitka), Co-Chairs of the House State Affairs Committee, sent a letter to Tom Boutin, the CEO and executive director of AIDEA, and Julie Anderson, the Commissioner of the Department of Commerce, Community, and Economic Development, inquiring about the nature of the sole source contract. The Landmine has obtained that letter, as well as the bizarre response from Boutin and Anderson. Here they are:

The response from Boutin is something else. You have to read it. Anderson’s is much more boring and generic. She defers to AIDEA but does include that “time is of the essence in moving this initiative forward.” Maybe that means there are more sole source contracts to come!

The best part is how Mr. Boutin says he does not believe the contract is for the amount of the contract. He calls it a month to month contract and only refers to the initial amount of $44,000. The next time I apply for a loan I’m going to tell them I don’t owe my mortgage amount, I only owe my monthly payment! And then I am going to show them Mr. Boutin’s letter. He conveniently leaves out that the contract (click here to see contract) and waiver (click here to see waiver), from AIDEA, is for an amount not to exceed $441,000. You can’t make this stuff up.

He goes on to talk about how awesome and smart Clark Penney is. Followed by some epic run on sentences about Alaska’s economy.

He then denies having any specific knowledge about Bob Penney’s financial contribution to the Dunleavy group, but says he does read newspapers! Funny thing is Mr. Boutin was a deputy treasurer for Mike Dunleavy’s campaign for governor. Here is the APOC report showing that. I guess no one ever talked about the Dunleavy group or their major donors, even though the campaign office was literally right across the street from the group’s office.

He also says he did not know Clark Penney until earlier this year. Which is weird because Clark Penney worked on Dunleavy’s campaign. Mr. Boutin also touts Clark Penney’s experience and extensive contacts as justification for the sole source contract. I guess he really got to know Clark in the last six months. 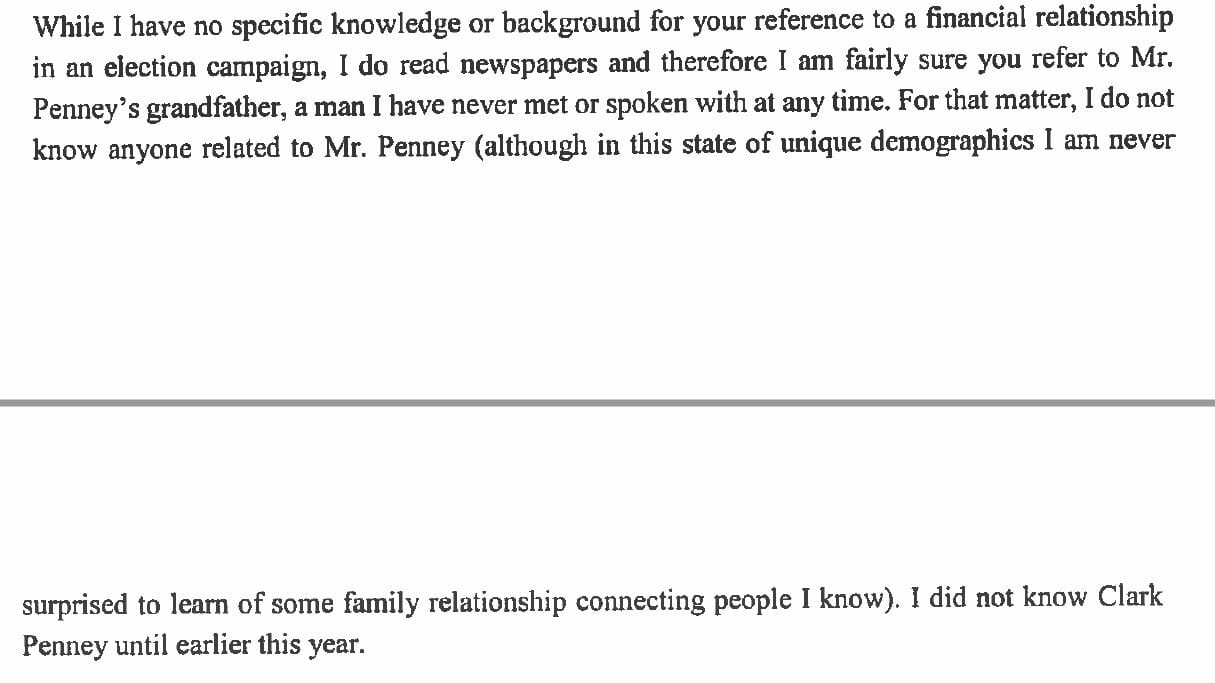 His ending is really something else. “Restoring trust that Alaskans once had in government will require more transparency that we sometimes saw in recent years.” Nothing says trust and transparency more like a sole source contract for economic development, from the Dunleavy administration, to the grandson of a guy who donated over $350,000 to get Mike Dunleavy elected governor. The hypocrisy is astounding.

More evidence that politics isn’t merit-based ?
It’s remarkable how many of these adults appointed to high-ranking positions can neither read or write!

Next you should look into AIDEA’s handling of the Road to Ambler… that’s another massive boondoggle!

Good work, Landmine. What bothers me is the broad assumptions typical of ideologues. Really, the value of our fish exports are less now than at statehood? And, yes, Alaska probably has a trade deficit. The point is???

Tom is in waaaaaaaaaaaaay over his head, and also not very smart.

Undated letter? Really relevant. How about AIDEA’s unaddressed letterhead? Maybe they don’t want anyone to know they’re in a building that once belong to VECO. Ghosts of corruption past maybe?

AIDEA has been and will continue to be a “wellspring” of cash for the politically connected. The mission of AIDEA is to pick winners and losers in the Alaska economy by granting (or denying) state subsidy.