In the beginning of the email, Lindemuth wrote:

I urge you to schedule hearings on HB 295 and SB 150 – the fix to the pretrial risk assessment tool. The attached news story illustrates the immediate need for having an override to a mandatory OR release decision when there is relevant out of state history. We’ve confirmed with DOC and Susanne Dipietro that we are more than a year out in being able to consider out of state history in the tool, and there is a good possibility that will never happen.

The story she referenced is this KTVA story, “Alleged repeat car thieves qualify for mandatory release”

The bill was introduced by Governor Bill Walker on January 19th of this year. It has yet to be heard in either the House or Senate Judiciary Committee. When asked why the bill has not been scheduled for a hearing, Senator Coghill said there was an issue with how the bill affects the tool and that legislative legal was looking into it. He said a hearing will be scheduled once the issue is fixed.

However, the bill has been in each committee for nearly two months and sources say this has been a priority for the administration since it was introduced.

Representative Claman was not reachable for a comment on this story.

A longtime legislator commented that it is unusual for a cabinet official to send this kind of email and copy all the committee members. Normally, these kind of discussions happen behind closed doors between the official and the committee chairman or their staff.

The KTVA article seems to highlight just how much of a problem there is with the bail tool. Public pressure to do something about the crime problem has been mounting over the last year. Many blame the unpopular crime reform Senate Bill 91 for the rise in crime, although it started before the bill went into effect. In November of 2017, Governor Walker signed SB 54, a bill the legislature passed during a special session that made changes to SB 91. It is puzzling why this bill has yet to have a hearing.

Lindemuth ends the email by saying:

We absolutely need HB 295/SB 150 to pass this session so courts can consider relevant out of state history – and it may be a permanent fix to this awful situation. I urge you to move forward with hearings.

Here is the full email: 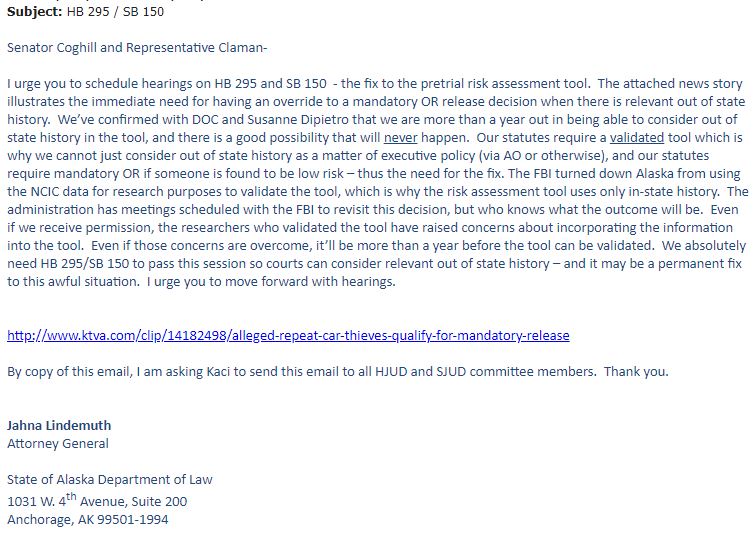