A Summary of the Anchorage Caucus Meeting

In prior years, the caucus met at the Loussac Library in an open, group format. This meeting, as well as last year’s, was different. Instead of a group format, where residents could testify to all legislators, the caucus was broken up into legislative districts. I much prefer the old version as it allows residents to speak to all of the Anchorage legislators (the ones who show up) rather than just their state representative and senator.

Representative Chris Birch is one of the co-chairs of Anchorage Caucus (the other is Representative Ivy Sphonolz). Birch said this setting allows Anchorage residents to speak directly to their legislators and discuss issues with them. While this is true, most of the legislators already hold constituent meetings throughout the session and year. Plus, many Anchorage legislators were not even in attendance.

I managed to spend some time in all of the meetings. There were two issues that seemed to dominate all of the groups, education and guns. Teachers were upset about cuts to education. There were some high school students that were protesting and advocating for education. Some people wanted stricter gun control laws, others did not want any new restrictions on guns.

Other issues that were brought up included the state budget, taxes, and the PFD.

Here is a handout with a breakdown of the legislators and groups: 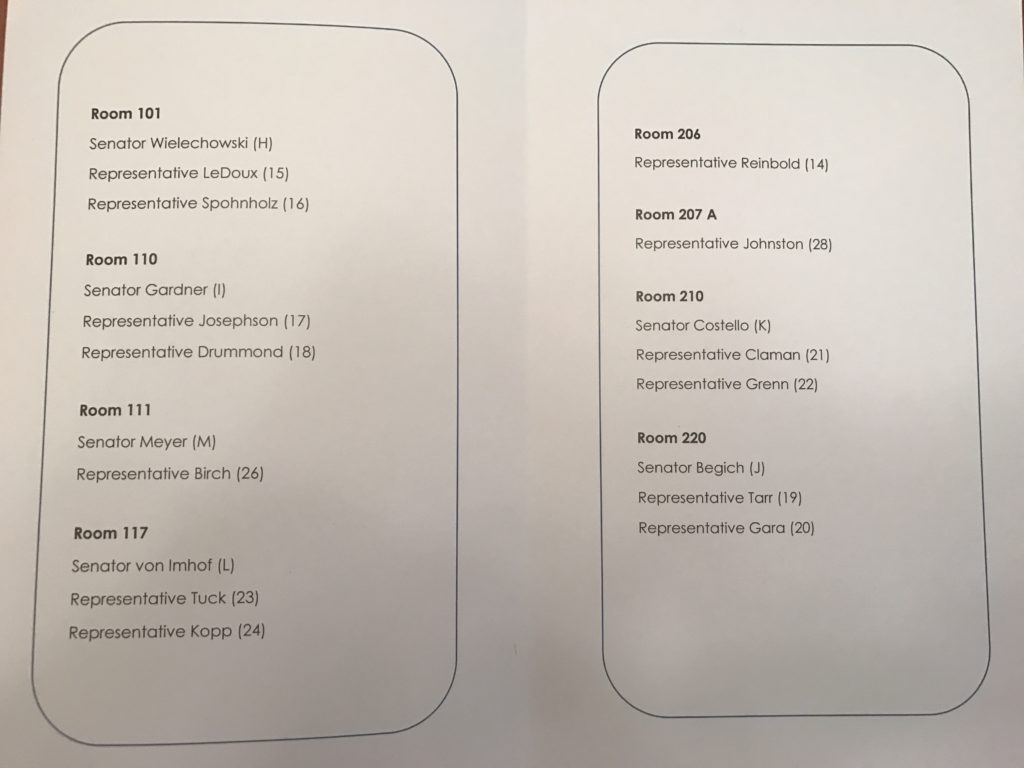 Strangely, some Anchorage legislators were not even listed. Others did not show up. Below is a summary of the different groups.

This group had around 15 people in attendance. One guy was talking about guns and referenced the Russian dissident and novelist Aleksandr Solzhenitsyn, who spent many years in a Russian gulag. He said the Soviets labeled him as paranoid. I’d say he had a right to be.

Senate District I, House Districts 17 and 18

By far the most packed room. There were around 50 people in attendance. Education and the fiscal plan (or lack their of) seemed to dominate this one.

This group had around 18 people. When I was in there, the fiscal plan and permanent fund were topics of discussion.

My district! This group had around 25 people. Healthcare, education, guns, and the permanent fund were all discussed. At one point, Senator von Imhof said the big hurdle with passing a percent of market value (basically using a percentage of earnings of the permanent fund for state government) is the amount of the dividend. She seemed bothered that this is an issue. Call me crazy, but maybe she is not the best vessel for this one. After all, we were in a building, Rasmuson Hall, named after her parents.

I stopped by and there was one guy doing some work waiting for anyone to show up. Sorry Eagle River!

This group had around 12 people. I did not spend much time in this one as it was pretty low energy.

This group had around 15 people. Education seemed to dominate this group. Two teachers spoke about budget cuts.

This group had around 14 people. Guns and education seemed to dominate this one.

Overall, I am not sure the Anchorage Caucus is even needed in this format. It is basically just a bunch of district constituent meetings. Many legislators and staff had to fly from Juneau to attend. It was also the same day as the start of the Iditarod. The fact that many Anchorage legislators were not even listed, let alone the seven that did not show up, shows this is not a major priority. Let’s see how it goes next year. Assuming they pass a budget by then…