The letter submitted to President Biden cites the importance of American energy independence, alleges that hundreds of thousands of jobs will be lost, and criticizes the Administration for calling for unity while unilaterally cancelling major fossil fuel industry projects. The letter requests a meeting between the Senators and the President Biden “as soon as possible.”

The letter references the Keystone XL pipeline and support for the project from the United Association of Union Plumbers and Pipefitters and Laborers’ International Union of North America.

Click on the thumbnail below to read the full letter in PDF format: 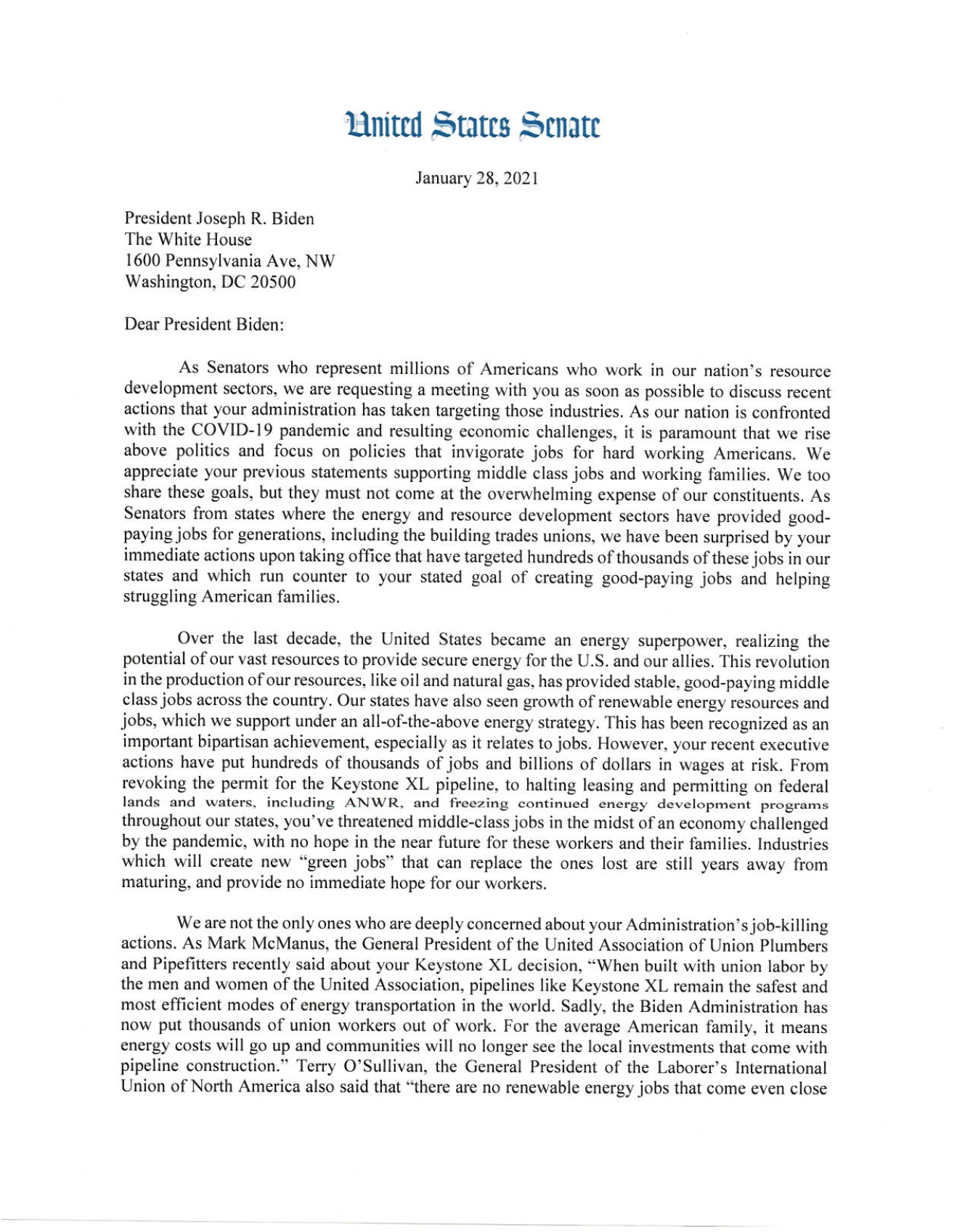 All of this weeping over Keystone XL, which would have created 8,000 4-to-8-month jobs during construction and only 50 jobs (35 of which would have been permanent) after it was brought online. No mention of the fact that it was brought to a halt by a US District Court judge 9 months ago, when only 1.2 miles of pipe had been laid on the US side of the border, or that the US Supreme Court upheld that decision and remanded the case back down the judicial food chain for further deliberation. Transcanada launched Keystone XL with their eyes wide open,… Read more »

Furthermore, no jobs have been lost as a result of the administration pausing new oil & gas leases on undeveloped federal lands while they review processes and procedures. Millions of acres of existing oil & gas leases are currently mothballed by the oil industry, which just gave a hard pass on the opportunity to bid on leases in ANWR. Where, Lisa and Dan, are these hundreds of thousands of apparently imaginary job losses you and your Congressional colleagues are tearing your hair out over? Industry is turning its eyes and its resources towards green energy, and Biden is stepping up… Read more »

Are you kidding .. dial back the rhetoric?..
4 yrs of resistance, a fake Russia collusion investigation, a phony impeachment trial, democrats labeling anyone who voted for Trump a Racist, misogynist, xenophobic insurrectionist….

Why don’t you come dial my speech you lil coward….

You’re wrong off the bat! I work seismic. We were due to go into ANWR this year and it was cancelled along with roughly 600 jobs in Alaska. That’s just me. An Alaskan who works on the north slope seasonally. Oil companies are much more reluctant to invest if they feel their return is threatened. Therefore no contracts. Period!!

Every little bit matters when it’s all getting shut down. Not trying to be defeatist.

Why isn’t this bunch of politicians taking the producers to task for not bidding on these leases? What did that tell them about the future for North Slope production? And then why not complain about cancelling the XL pipeline to make sure Canadian oil has even better access to markets than Alaskan oil ? Any clue as to who their “real” constituent is?

What you expect murkowski!? Your so dim witted!